A simple clone of Garmin's Multi Time Zone widget that supports all of the various Garmin devices.</p><p></p><p>Limitations:</p><p>• configuration must be done via Garmin Connect Mobile (GCM) or Garmin Express</p><p>• user must know the appropriate offset</p><p>• doesn't (yet) automatically handle Daylight Saving Time (DST) changes</p><p>• local time can be displayed with an offset of "999"</p><p></p> 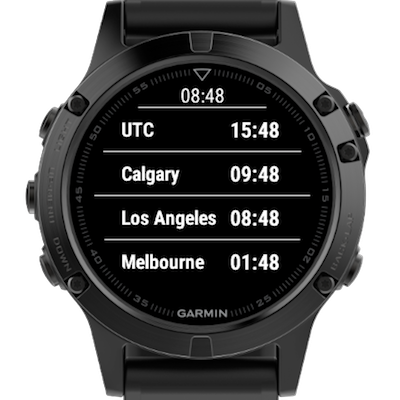 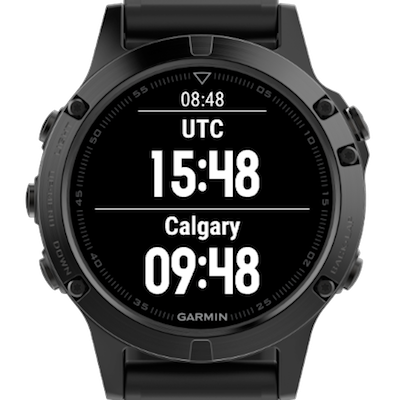 Great! Have been using for years. You say daylight saving is coming, but I would also like 24 time please.

Love it! Been using it for years. Thanks!

There is no option to edit the offset into a minus (-4).

Hi there. I only set the name, description and data type for the settings. The actual changing of settings is handled by Garmin's apps, which I cannot control. And unfortunately, there are some issues with Garmin's app when trying to change some settings. If you are trying to enter in negative numbers (eg. "-10") for a zone behind UTC, you first have to enter in the numeric value (ie. "10") and then move the cursor in front of the value and at that point you can enter in a minus sign. If you're on iOS and there's no option to enter a minus sign then you'll have to copy one from somewhere else and paste it in. If you are entering in a zone that is ahead of UTC (eg. "+10") try just entering "10" without the plus sign. I think there is a bug with Garmin Connect Mobile (GCM) that barfs when you try to represent positive numbers with a plus sign.

Try several time to setup through my iPhone, but either the app crash or unable to setup the time zone, always remain UTC zone....please help to fix it with IOS system, I really like the display of this app.

I initially rated this app at a one star because it was not working with Garmin connect despite repeated tries. It would reset to the default settings regardless of what I did. The developer responded to me within hours and recommended downloading the new Garman app Connect IQ which worked quite well. I would suggest using the new app for this widget. It now works great and is very helpful.

Works great! It would be nice to improve the widget design with colors usage (e.g. to color time zone names to improve readability).

Uninstall crashes my Vivoactive 3, leaving me unable to remove this app.

Hi there, and thanks for the feedback. Install and uninstall of Connect IQ widgets is taken care of by the watch operating system and nothing to do with the widget itself. Make sure you have the latest stable firmware installed on your watch and that you have restarted you watch before and after the uninstall. You can also try re-installing the widget then restarting and uninstalling. If all that doesn't work, I suggest you contact Garmin as there may be another issue with your watch.

Simple and effective. I'd suggest an ability to reorder the zones in the settings screen. I have a timezone for Home, which I'd like to always have at the top.

This is the widget I was looking for.... almost. Just the limited amount of 5 time-zones is what I would like to have changed. I am no developer but I guess it should not be such a big deal to extend the available fields from 5 to e.g. 10!?

I've tried several time zone widgets but this is the only one that has a simple, clear display and works when not tethered to the phone. It's very close to perfect. There is a slight formatting problem with the AM/PM indicator being clipped if you aren't set for 24-hour clock. If it only did automatic switching between daylight saving time I would give it 5 stars.

Very useful, many thanks :)