The #1 Rated Garmin app with over 200 5 star reviews! Try it now to see why.</p><p></p><p>Live Wind and Weather data on your garmin data screen. Tons of optional fields including Humidity, Air Quality, Gradient and more!</p><p></p><p>New How to Install Video: https://youtu.be/cgLeDoLM_SQ</p><p></p><p>PRO subscription has improved accuracy and includes Strava Integration.</p><p></p><p>Live data on your Garmin AND in your Strava feed post activity. </p> 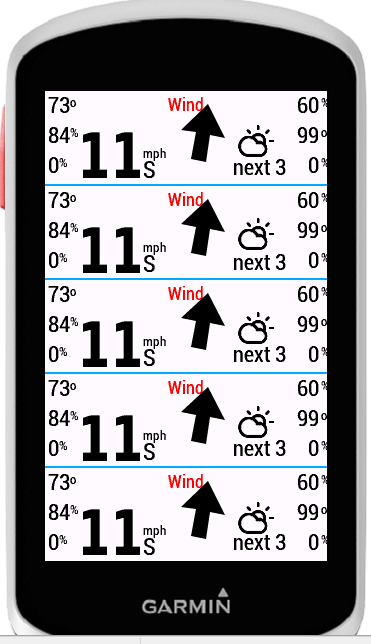 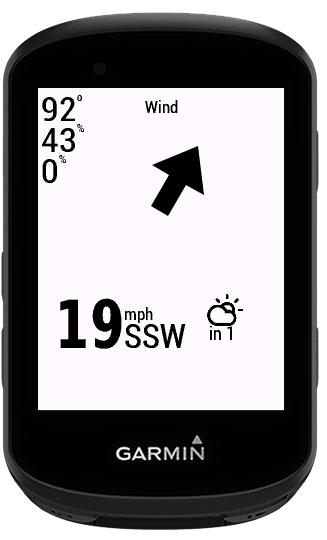 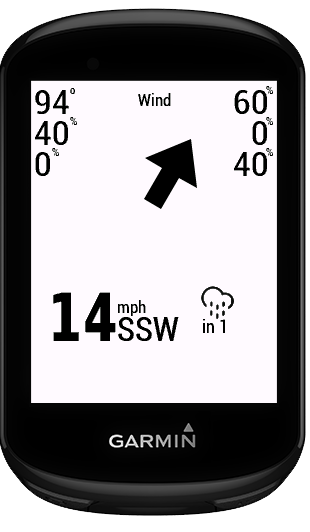 This a great App. If what you want is a random arrow generator that is. However, it's no good at showing actual wind direction. I've used it now in 3 different countries, I've paid for the premium version, and I've tried all the available options of weather sources. I don't know if the failing is internal to the app, or the weather data received, but it just doesn't show actual wind direction.

sorry to hear that it's not accurate for you. looks like you are on an island in the mediterranean so i'm not sure what the weather stations there are and how accurate / close to you they are. using nearest should be the default for anyone on PRO. but it is why i offer a 1 week trial so people can see how good it is for them. i do have customers all over the world that do find it accurate for them. happy to offer a refund if you're not satisfied

i try to use the most recent garmin sdk, but i may have moved to fast for this most recent release. i can roll it back to the previous sdk version and see if that works for you

This by far is the most useful bike app that I have purchased.. It gives all the most relevant metrics for the weather which are a necessity when you ride regularly. Also, excellent support with the app from Scott. Awesome!!!

Love the ever increasing functionality of the app and, on the odd occasion when I need help, I really appreciate the rapid response from Scott to all enquiries.

I have used this field for a couple of years and it is very useful especially on spring/fall days when the wind changes quickly. The only thing to me is that it is difficult to know which weather source is more reliable for my location (Madrid, Spain). I had some issues with the activation code when I changed my device and Scott was quick and kind in helping me with that. I do recommend paying for any type of subscription if you can afford it in order to support the project.

Only works some of the time. I've tried changing the data source to Garmin to see if it works better but mostly the fields are blank as it doesn't seem to be receiving any signal and data. When it works, it's good as long as the field size on your data screen is large, so above five data fields on my Edge 520, the wind direction arrow is too small with my ageing vision!

hit me up thru the contact developer and we can work out what might be going on. The Garmin data source is the least accurate and it doesn't have all the optional fields.

There are few apps I keep on my device, but this app is constantly at the top of my list. It literally helps me beat my PR's as I can estimate efforts and such for a given day in relation to the wind. It's the biggest field on my display for a reason. Also, not sponsored or given this app or anything, but get the paid version. It's worth EVERY penny with the amount of customization and information change you can do. Developer has been immediate anytime I've had a question. Best app in IQ as far as I'm concerned.

Best app available for Garmin. Essential. Accurate as hell. Handy cause you can have ascent etc on that screen so you don't need to burn space on another page. I find I ride with that page on most.

Very useful. Great, timely support by Scott. Definitely worth the money for the paid version.

Been using the app for about 7 months with great results. Just upgraded my Garmin and Scott walked me through the transfer process to move the app to my new Garmin. Super customer support.

It's worth every penny for the Pro version. I've added this data field to every profile on my Edge. Riding in the open of Central Texas it's nice to know where the wind is coming from and how strong, especially if you're out with deep wheels. The developer is super responsive and helpful.

Amazing app and developer! The app puts a variety of relevant information on your Garmin screen with very easy-to-read graphics and text. Super easy to install and modify the screen. The developer is very prompt in responding to questions or issues with the app. Highly recommended!!

The app is wonderful. This should come pre-installed in every Garmin device. When you ride, and I assume run as well, wind is a considerable factor. Knowing speed and direction is a key piece of information. Scott, the developer responded to my support request on a Saturday within minutes. Super responsive and helpful. Well invested money. Thanks!

I have had the paid version of this app for a while and have loved it. Just upgraded to pro version and had a problem getting it to work. Scott the developer was super fast and helpful in getting back with me. It works great now!! Thanks Scott, great app!!

Been using this app for several weeks now with consistent and accurate results. New Strava integration is interesting and automatically syncs data I would sometimes include anyway like temp and wind intensity. Awesome example of what can be provided via Garmin’s development platform.

Great app just got even better. The developer is always looking for creative and helpful additions, tweaks, and fixes to make the app more helpful and effective at doing its job. The PRO version is well worth the nominal fee, do yourself a favor and subscribe. I love it!

I've been using Windfield app a few years and it works flawlessly. The data adds to my experience. Scott Beam, the developer, is super responsive and a pleasure to chat with. Get the PRO subscription; it is worth every penny. Thanks for the great app!

Got a new phone and had some connection issues to get bluetooth connecting to my Edge 1000. Scott responded promptly to my email and helped me get re connected to wind field app!

Great app. I use it every day , added Forecaster the combination Rocks. Developer is quick to respond with detailed answers and solutions. Best weather app I have ever used.

App adds interest and sometimes an explanation for why I seem so s.l.o.w...Scott has responded rapidly and helpfully when Garmin has created hurdles. A must have app!

I love this app and the paid version even more. Just set it to your closest weather station and you have up to the minute wind and weather information while you ride. I find it very helpful to understand how my performance on the bike is being impacted by the wind direction. I had some problems with registration initially but thankfully the developer provided amazing support to get things ironed out. Oh and the integration with Strava is so cool!

This WIndField app is one of the only reasons I have not sold my Edge 830 for a Wahoo Roam. It's nice to know at a glance what the current temp and wind direction and speed are in my area. Also the developer was very fast to respond when I had a question about the app.

Update: Really the very best support you can imagine. Thank you very much! Highly recommended.