Track your climbing wall / boulder sessions!</p><p>Press the Lap key / gesture to switch between climb and rest mode. When in a climb, select the level, e.g. V0, V1... and when done climbing press Lap and select whether successful or not.</p><p></p><p>If you liked it consider donating 1-2$ to support the dev effort. Thanks!</p><p>paypal.me/eransoftware</p><p></p><p>Supported grading systems - Boulder (Hueco), Fontainebleau, Yosemite, UIAA, EWBANK (Australia / New Zealand), Nordic, British Adj, British Tech. Send me a feedback if you need another system. As requested added an option to change the system during the activity - press Start / tap the screen and select "Change Climb Type".</p> 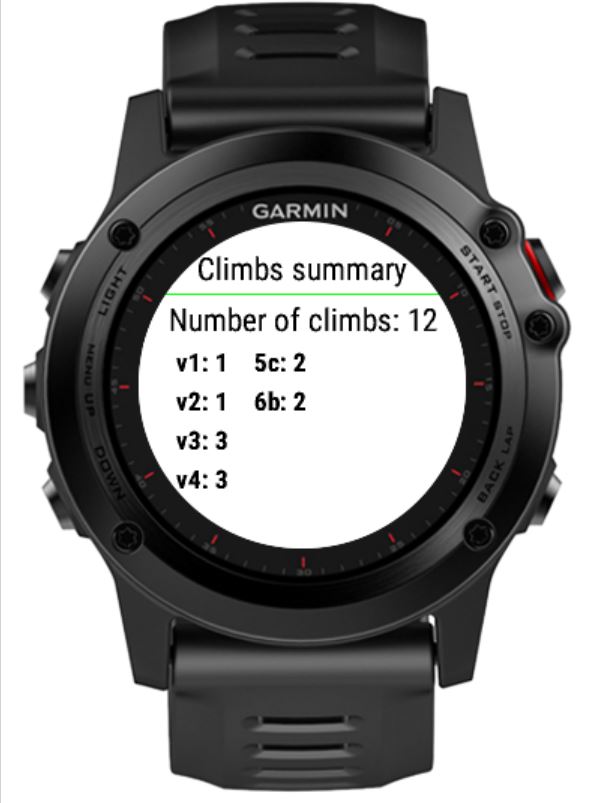 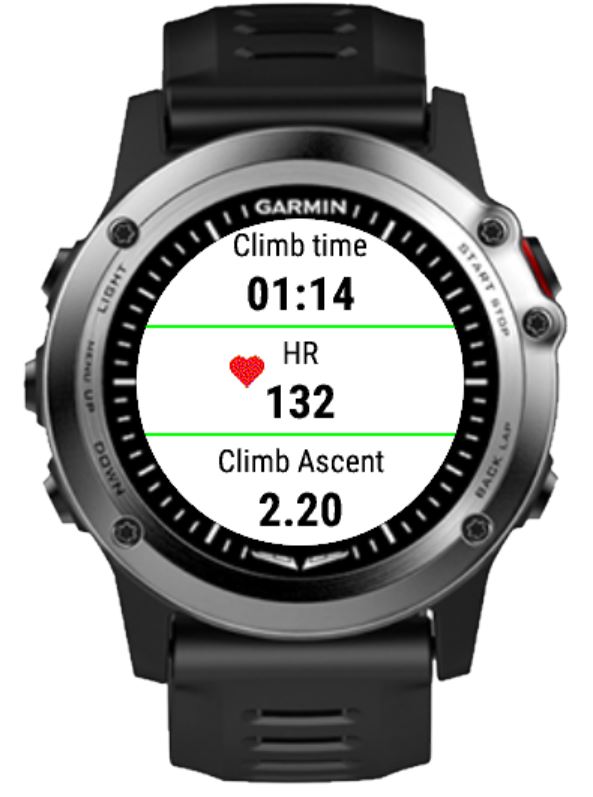 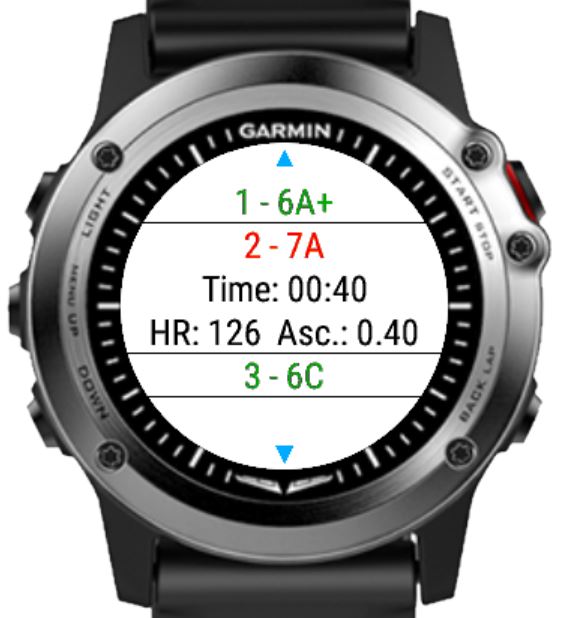 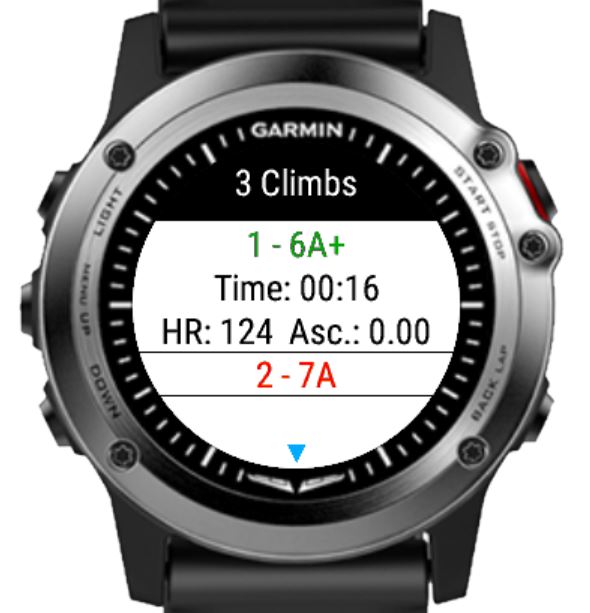 Great app! I have been using it for about a year now. It would be awesome if there was a feature where you would be able to see the grade of routes you climbed in a previous session.

hi, you can see the grades of previous sessions in Garmin Connect - In the mobile apps, go to the Laps section of the climbing activity and turn the phone horizontally

Thank you for bringing a climbing app so those of us that aren't on the Fenix 6 or Forerunner 935 can still track our climbs. Note: If you're indoor climbing in the US, you'll want to select the "Yosemite" option, not the climbing wall option, as most gyms use the Yosemite Decimal System. After you select Yosemite, you can then enter your level, so if you're climbing a 5.11a, you'll select 1, followed by 1, followed by a. So for the comments below regarding how climbing wall only goes up 9, and you're trying to log a 5.10 and higher, select the Yosemite standard.

Love this app, but haven't been able to use it the past few months. Every time I try to start the boulder activity on this, the green check mark is gone to verify the grade, and when I press the area where it was my watch will go black and vibrate until I force turn off my watch. It only seems to happen on Bouldering. Unfortunately the last application update didn't fix the issue or the few system updates that have happened since the issue started.

Takes a few minutes to work out how to use the app but once you do it's great and pretty intuitive! Thanks to the developer!

Very nice app, would be great if the app could populate the informations on the standard bouldering and indoor climbing activities in the connect app

hi, the info is there :) - go to the Laps (Splits) section in the Mobile Connect app, turn the phone horizontally and scroll all the way to the right

Enjoyable app! Would be good to see ascebt time for the each individual climb in the data page. Also I inputted the wrong YSD level and couldn't change it after starting the climb. It gave me the option to change climb type but couldn't input a level. I just need to remember to statt the new climb every time I ascend!

hi, before you ascend you need to press the Lap key / gesture and select the level

I’m also looking for a climbing wall/top rope grade higher that 5.9, I don’t see it with this app.

It looks like the rating can only go up to 9. Is there a way to indicate a route rated higher than 9?

Very good. I am using a Vivoactive 4. Intuitive button presses, similar to other activities (same pause button; lap button for next climb). I enjoy how it senses a decent and automatically asks whether the climb was successful. Data is clear in the Connect app (after rotating phone). Possible tweaks I can think of: to unpause by pressing the same pause button (currently have to press the screen to unpause); to disable pausing by pressing the screen (it can get knocked and pause accidentally); and a display of the current time of day on the rest screen (I have found myself asking a friend for the time so as to not end the activity, which seems silly while wearing a watch!). Thanks!

hi, thanks for the suggestions! Time of day is already there in the 3rd screen :) - Scroll up twice in the Rest screen to get there. You can also long press the screen to return to the watch's main screen, as in other apps.

Thank you buddy, I am using this app for a long time. But want to learn is there any possibility to see how many route we climb in connect page, and route detail without turn mobile horizontally, instead of seeing “km”. Like new garmin indoor climbing activity. And can we change order of the data in app. For example rest time and day of the time in same page. Thanks again for your effort. Really helps us.

Great app!!! Thank you for your work!!! Just one thing, is it possible to complete the climb manually?

hi, you can turn off the Auto Climb feature from the app's settings menu

Great app, but the there is a difference between the Fb-Scale (french bouldering grades) and the French Scale for regular rock climbs (which is used here in the app as "climbing wall").

Pretty great! It would be easier to use yosemite if the first number was just 6-12 and the second was A-D, but that’s a very minor complaint. Thanks for making this!

I read the other reviews before downloading to be sure this is the app I want. Played around with it on my Fenix 5x Plus to get a feel for the interface. Very intuitive, got comfortable within a few "laps." Moved to garmin connect to check the log, it has all I feel I need, successful/unsuccessful (laps page), time to climb/ rest and heart rate tracking. Super excited to use this at a gym or boulder field in the near future! Only goes to V-9, but I was maxing out at V-4 before the pandemic so this won't affect me for a while. Considering garmin doesn't have a bouldering activity for my watch, this is perfect.

I love the concept and the feature on my Forerunner 945. I was surprised to see the option to to switch the discipline from Boulder to wall climb on the app of the watch and identifying the skill level. I was however disappointed when I synced the workout to Garmin Connect and did not see a detailed summary. Also the disciple was not rock climbing rather Boulder indoor gym workout. Thank you though.

hi, 1) you can see the details of the climbs by going to the Laps section of the activity and scroll all the way to the right. 2) Unfortunately it is not possible to set the activity type to Boulder / Indoor Climb in 3rd party apps.

Nice app! Is there a way to see how many routes I climbed and if they were successful or not on my phone? I can see it when I'm logging the climb on my watch, but if I try to look at it afterwards I can only see the "laps" with no information on whether I completed it or not.

hi, the app adds the number of climbs and # of successful climbs to the summary section. Also, for each lap (climb) the app adds the climb name, successful or not and the altitude gain. To see those, go to the laps section, turn your phone horizontally and scroll all the way to the right

Great app! Can’t find a way to change the grading system, however. Is this possible? With bouldering, we use the Font scale, but in the app I can’t chose this scale (or at least I can’t find it).

hi, please select "Climbing Wall" when starting the activity, it uses the Font scale. You can also change the system in the middle of an activity by pressing Start (or tapping) and selecting "Change System"

Well thought app. The only thing it lacks is saving data as climbing activity, not as a run.

It would be great if you integrate the output activity with the new climbing and boulder Garmin native activities and not as "others".

This is an awesome app. I almost spent a lot more on a watch with a climbing specific app, but this let's my vivoactive track my climbing. So glad it exists!

Seemed to work in the gym. Tried to take it outside using a heart rate monitor and keeping the watch in my pocket, and out of 6 climbs it did not successfully track a single climb. Had to turn off the auto-lap as it kept finishing the climb while I was resting on the wall, and at one point it decided to give up and finish my activity altogether.

I was Bouldering with it yesterday and it is nice to see the statistics. However, elevation was not tracked at all (maybe not possible?). Also it would be nice to distinguish sent and not sent climbing routes in the graphs. In the graphs the difficulties have been one grade higher than i have chosen in the app which I found confusing but not tragic.

Hi, elevation depends on the watch - some models don't have it and on those that do its accuracy depends on the conditions outside. The numbers in the Difficulty graph aren't the numbers of the climbs but rather a unified representation of the difficuly of the varrious systems - 1 is the eaisest climb (3a for French, V1 for US, 1 for Australian...) 2 is the next (3a+, v1+, 2...). You can see the actual climb names in the Laps section

Awesome app I only have one issue, i wasn't able to change difficulties / or select a new lap with differwnt difficulties. So i had to track like 10 different activities, one for each route. Other than that awesome app, thanks for sharing it!

Hi, changing difficulty is done using the lap button / swipe. If it doesn't work for you, send me via feedback which watch you're using and I'll check why