Trailforks is the worlds largest mountain biking trail map that now also supports other trail activities such as hiking, moto, skiing and horseback. The Trailforks Garmin app is your companion to the Trailforks website and phone app, for loading routes to your device and giving you route recommendations.</p><p>The Trailforks Apps main function is to list routes and allow you to download them as a .FIT file to your Garmin device for use with the native routing engine. The app has three main sections.</p> 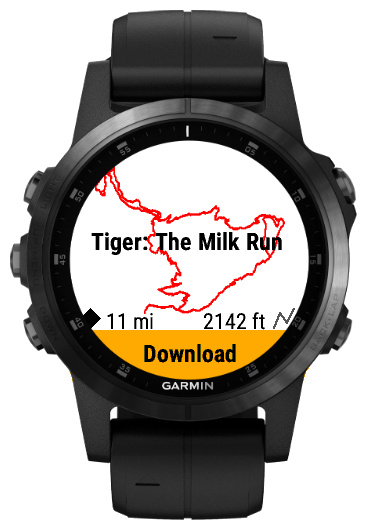 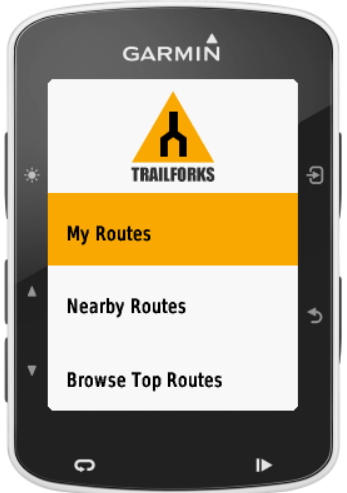 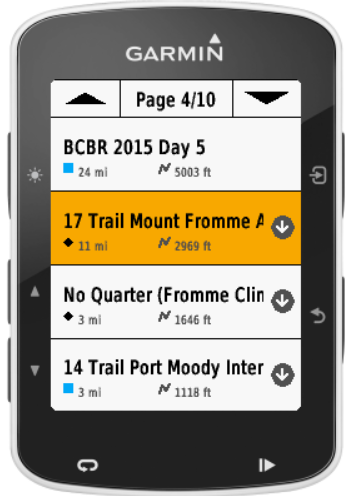 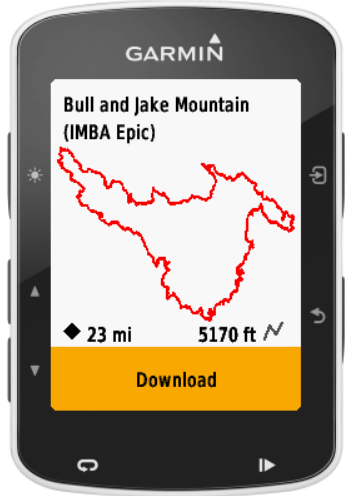 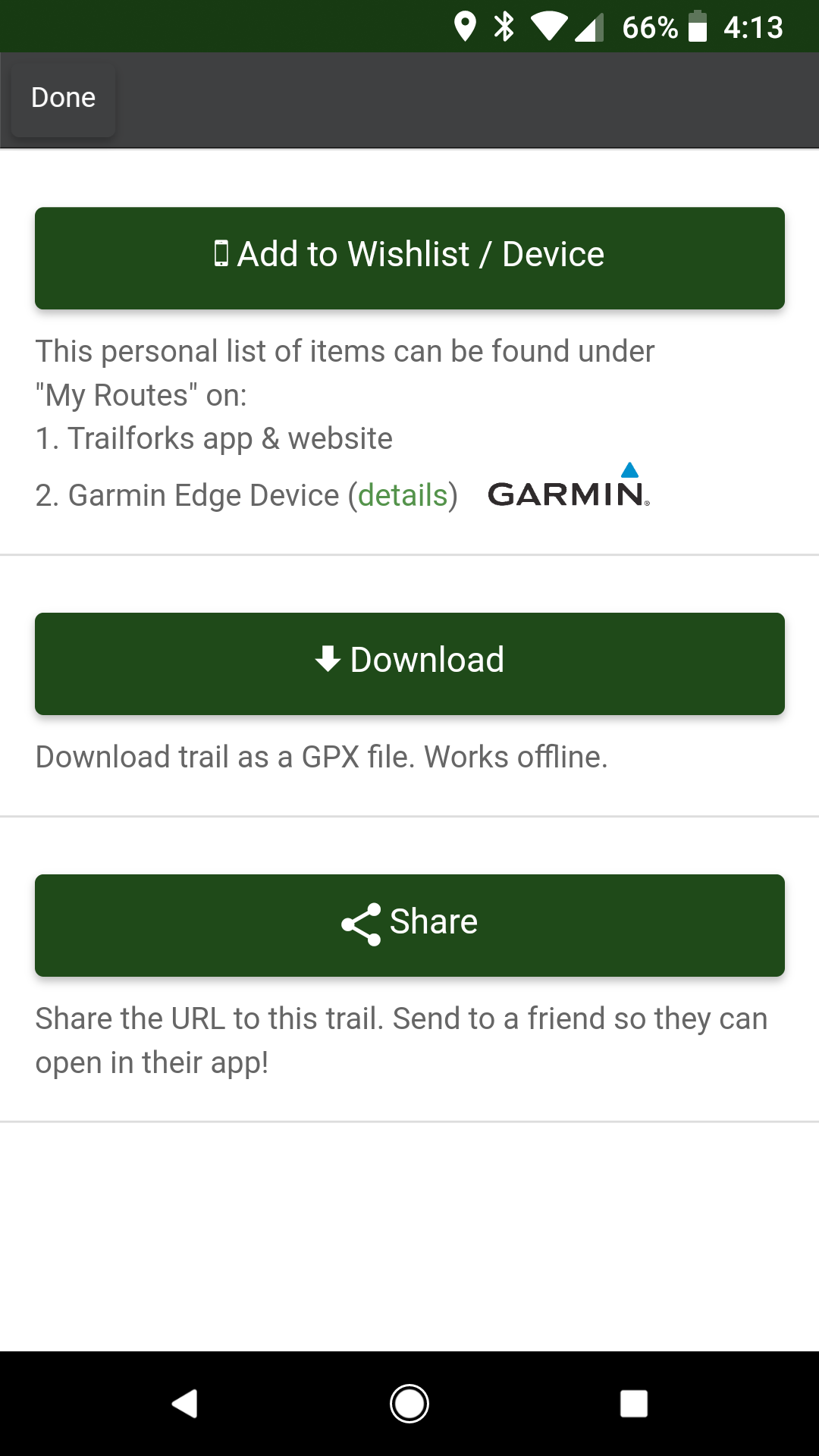 Crashed my Garmin and won’t let me start my ride.

It looks like I am logging in on trailforks thru IQ app but map unlocking fails every time (almost 10 so far).

Worst Register and Sing In ever. Biggest waist of time period.

Same as nearly all other comments . I have a 1030plus software version 4.10 . turned off wifi as recommended in another comment . Still not working . Komoot works fine.

I have NEVER been so frustrated with a device and app combo! I bought an edge 520 plus recently given that both Komoot and Trailforks are supposedly compatible. Komoot works brilliantly but TF is a write off so instead of being able to use one device for trails and navigation I still have to use my phone to find trails!!! I have updated my device via Garmin Express, I have installed/deleted and reinstalled TF and Garmin Connect on my phone, I have reinstalled TF on my device, I have paid for Pro and yet I still do not have access to the TF map of my region? Do I really need to download this via a laptop and then load this onto the device? From all the blub on the internet it says all you have to do is download the TF app and off you go! I can download routes that other people have created but all I want to do is view the TF map (and not the pre installed Garmin map) when I am out on a ride. My friends all have older versions of Garmins and they have no problem viewing the TF map of the region they have selected.

Viewing maps is outside the scope of THIS app. This app is just for viewing routes or specific trails added to your wishlist. Garmin 530,830,1030P have Trailforks maps integrated. For other devices you can manually download and install them on your device, if it supports it. But again, this is not related to this app. And an Edge 520 has a very small storage space and doesn't officially support loading custom maps. If you look online there is a way to do it, not again, not related to Trailforks. https://www.trailforks.com/tools/garminmaps/

For people who have issues with Trailforks not connecting, try turning off the WiFi on the Garmin device and let the internet connection go through your connected phone. Since I did this Trailforks & Komoot are working. With WiFi on Edge 530 on... nothing. From both apps.

It seems to work on my new Edge 530, but sometimes it crashes...

Brand new Edge 530 for Christmas and TF Pro user. The native Garmin basemap is poor as many newer trails (last 3 years) are not on there. Installed TF. I was able to authorize but have to do that every time I go for a ride. There is no TF data, only My Routes, Top Routes and Populare Routes. What if I don't want to ride a route or plan every ride on my computer before I go? I downloaded a basemap region off TF and clumsily figured out how to migrate that onto my Edge. There is no support or detailed info available for this on the Garmin or TF website. Now it shows more trails but still not most trail names, it displays "Riding On..." but not the trail name I'm on. It occasionally displays "Coming up to xyz trail", but there is no Fork sight actually showing the trail names when I'm at the intersection. This is all I wanted out of this device and it has yet to deliver. Please fix it and provide more instruction detail on your Website.

A lot of this is out of our control and is on Garmin's end. The basemap has nothing to do with this Trailforks CIQ app as well. The basemape either comes pre-loaded with the Edge 530, 830 or 1030Plus. Or you can manually download and install a custom TF basemap. But the pre-bundled one is the only one that will work with Fork sight (a Garmin feature). And it is only updatable via using Garmin Express on your PC.

Agree with the reviews below. Cannot authorize. No visible routes. Useless at the moment.

Can you please send an email to [email protected]com. Please include your Trailforks username, what firmware version is installed on your Garmin device, and what version of the Trailforks CIQ app you have installed.

Same problem as Kevin below. Edge 830 and Pixel 4a. My Edge 830 is at 7.0 and Trailforks IQ app at 1.2.5. Every time I click on "My Routes" it asks me to authorize in the Connect app. The authorization opens in the Connect app, I enter credentials, and it states success. The IQ app then advances screens but no routes are available. Every time I go to the "My Routes" section, I have to re-login and then no maps are available. I tried factory rebooting the edge and deleting / re-installed the Connect app as well. The other options in the IQ app such as "Nearby Routes" does not display anything. Useless at this point.

Can you send an email to [email protected] Copy and paste your issue into the email and please include your username. Thanks

Just received my new Garmin 530 directly from Garmin. No Trailforks maps are installed and cannot use any Trailforks functionality. Followed instructions just like other users but also stuck in authorization loop. Seems to accept my credentials but then does not download/allow access to the map. In Garmin Express, it appears that Trailforks map 2019.10 is installed but in looking on the 530, it is not on the list of maps. Very frustrating. Seems to be a common issue, is not sure why someone hasn't figured this out by now. Currently on hold with Garmin support...

Please connect your Garmin directly to your computer via USB. Using the Garmin Express app on your computer make sure your unit is up to date. This includes the Garmin firmware which I believe is 7.0 and the Trailforks QIC app which is version 1.2.5. Once you have confirmed everything is up to date and working, make sure your unit is paired and communicating with your phone and the Garmin Connect app. At this point, you should be able to authorize your Trailforks account to communicate with your Garmin via the Trailforks CIQ app. You may need to remove the TF CIQ app off the Garmin itself and start the process from the beginning after you have confirmed everything is up to date.

Using on Fenix. Navigation is ok. Routes are ok (just boring as heck to draw on the computer). Wish I was able to just open trailforks map without having to draw a route. I use trailforks a lot when exploring new trails and would love to use the watch for that.

Cannot authorize the app. How the f*** am I supposed to do that!? Stupid app asks me to authorize trailforks but HOW. By the way the message says „Open the connect the mobile app and authorize trailforks“ so obviously something is wrong or badly implemented already here („open the connect the“ !???) I then clicked through all options in the Garmin Connect App, the Garmin Connect IQ App and in my desperation even the Trailforks App. Can’t find a way to authorize anything. I closed the apps, restarted the garmin. Nothing. It really makes me wonder. How can I have completed a PhD and a master’s degree in computer science but I fail to install trailforks on my garmin? Maybe it is me, or maybe Garmin is just the worst when it comes to usability and user experience.

It appears this is unfortunately an issue on some Garmin devices not unique to our app. Please try turning off the Wifi on you device and only use the Bluetooth connection. Also update to the newest Garmin firmware as well as Trailforks app on the device.

I really want this app to work, but it doesn't. Cannot download the track or ride log to my garmin watch. It keeps failing to download and either times out or gives me a IQ error. Have tried uninstallkng Garmin IQ, Trailforks, and resetting garmin device without any change. Basically renders Trailforks app useless.

I think I finally tracked down this issue and fixed it today. Routes that had non alpha numeric values in the title metadata field of the downloaded FIT file would crash. I fixed this by stripping out these characters and my test case works now with no IQ error. This fix was on the server/API side, so no app update is needed.

now ridelog gpx can't no longer be downloaded, despite like other users I have been forced to pay for pro version. Very disappointing. I'm looking for an alternative app.

You do not need a Pro subscription to load routes with this CIQ app. Just add a route or trail to your wishlist on either the Trailforks app or website and it will showup under the "My Routes".

I successfully downloaded it to my Fenix 5, but could not get it to display a map. It requires that you have it connected to Garmin Connect in order to see your routes (not good if there's no wireless in the mountains), and specifically log in to Trailforks. I could see a list of the Trailforks routes, but selecting one of them did nothing except generate the message "Loading preview..." and the message never goes away. Perhaps incompatible with Fenix 5, but I could not get the app to work.

On the screen where it would show the preview, there is a yellow download button at the bottom of the screen. On the Fenix you have to press enter here (top right button) to actually download the route to the watch.

This app is all I dreamed for my fenix watch, works perfectly, THANK YOU!!! TIP: to enable turn by turn navigation to the course (supported watches only) configure your activity -> routing -> courses -> use map

I think I finally tracked down this issue and fixed it today. Routes that had non alpha numeric values in the title metadata field of the downloaded FIT file would crash. I fixed this by stripping out these characters and my test case works now with no IQ error. This fix was on the server/API side, so no app update is needed.

I’ve been waiting long to get the app for my Fenix 5plus and been little worried because of ratings, but it’s working without any issues. Even better after adding the base map.