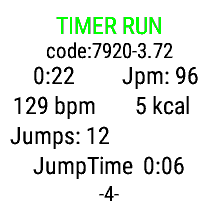 1 hora pulando corda = 100 calorias no no no. Impossível.

Hello, Nice app but some things bother me : - Jump count is off with forerunner 735xt, i think it count twice or thrice a jump. - Record time is of too, watch recorded my session today of more than one hour, while i check the session in garmin connect it's 20min off than the time recorded by the watch (39min). Hope it will help. Best regards

Counter/jumping time is totally wrong for Garmin 235. Please fix this...

I really want this app to work properly as I am really into my jump rope. Unfortunately, it doesn't count or time correctly. I did a 5 minute session to test it and it only counted 30 seconds jump time. Please fix it as I really want to use it

It's just okay the number of jumps and they graphs don't match and when you save it and view in Connect the numbers are different there too. Nice concept but it doesn't seem as if anyone tested it, I'm glad there was no cost associated

I tested this app and my feedback is not so good. Frankly speaking I am disappointed because the results of each session are poor and incorrect. I hope in a future improvement by the owner. Regards Luigi

This app is ok, but jump count is not working properly on Vivoactive HR.

You should put the number of jumps in the main display of the Garmin connect app. Instead of heart rate or the calories, the number o jumps should be there. Please change that display.

Needs to show total jumps and jumps per minute I'm the GC summary. The graphs aren't interactive (as indicated by the IQ icon) and would be better if they were. Final point, it should be called skipping and not 'jump rope'.

Your device seems to work for me most of the time but you designed it for young eyes. I am 54 and need to put my glasses on to read it each time. I suggest a green band for on and a red band for off. also bold jump count on one screen and the the other information on another screen. The other information when you are done. If you make it better I will buy it as a paid ap

On FR 735xt the jump counts seem to be working fine! Love the auto laps and the exact time spent jumping. Wish it would show the total jumps, jumps per minute, jump time and heart rate for the session on GC. I am on a Facebook jump rope group and would like to share how I use this app if the jump details could upload...Looking forward to the next update!

I really like the app. The only problem is that it does not record the number of jumps correctly. It records up to three times the actual number of jumps on my Vivoactive HR.

The name of the app is JumpCount, so I expected that I could see the counts in GC and not only on the watch. So no chance to recognise any improvements. After you stopped skipping the app has a delayed stop! So I'm not going to pay for it at this time.

Inaccurate - counts many more jumps than my rope with counter, or when I count jumps manually. Needs to record jumping time as moving time, and elapsed time in total time field. Moving time seems to be under-reported too. Needs to record number of jumps (ok, so this is a SDK limitation...) Text too small; would be nice if app supported data fields and also had same look & feel as Garmin apps (with a HR screen). All in all, I guess it's "okay", but more like a beta (alpha?) so I wouldn't pay for it... yet.

I have a vivoactive hr. It seems to be accurate. I wish it had fewer lines of data. The characters are too small for old eyes. Number of jumps and total time is all that is needed.