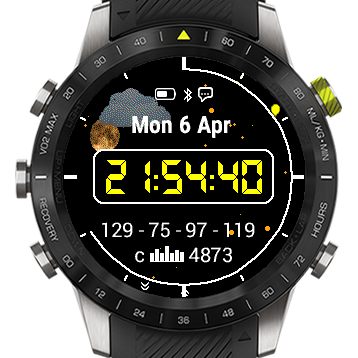 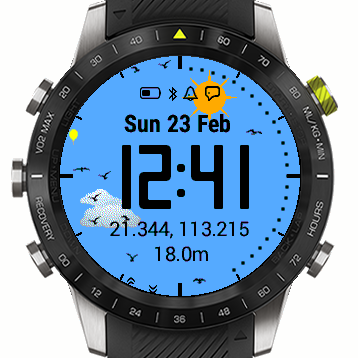 Five stars for the great idea for functionalities.. and hope your job to inspire.. I dont know why, i have activated the second screen but I cannot see second screen.. I have fenix 5x in last version firmware (4.10)

Thanks a lot! As far as I'm aware unfortunately the current fenix 5x firmware still does not allow many CIQ watch faces to operate correctly. I hope Garmin can find a solution soon.

Updating my review as the bugs have been worked out and it's working again on my watch. Tremendous dev support and response. Thank you!

Great, until my watch updated! Now it won't even load :(

I'm sorry but according to my analysis, this appears to be a problem with Garmin's new firmware (3.90, not 2.90 as I mistakenly said before), not with my watch face. The good news is that it can be worked around and I'm testing the fix now. If I don't find any more problems arising from the new firmware, I will publish the updated version soon.

Worked great until it stopped working overnight. Can't get it to appear on watch face although it's still there as a downloaded watch face. Uninstalled & reinstalled and still won't work. Please advise.

I am really impress with the great watch face on my Vivoactive HR. Thank you, it makes me daily happier with the sun and moon movements :)

Didn't work on my Fenix 5X

Good aplicación bat not suported mode temperatur in my furerunner 235 .

Thank you :) Actually this does not have be wrist move literally. Yes, flipping should work, you can do some experiments by taking your watch off and observing how the switching between the two screens behaves depending on the watch orientation. As I say in the instructions and confirmed by others, with a little practice you can get quite precise control of which screen the watch is showing when you need it. Otherwise I know it would be nice to be able to switch the screens using buttons or touch screen, but unfortunately this is not allowed by Garmin for watch faces.

looks nice but it made my watch run REALLY slowly

Sorry about this. Hopefully the moon age calculation should be more accurate in the next release. I think the setting to adjust would not be very useful because the error varies from month to month. Normally it should not be more than 1 day, 2 days was a rare case.

How can I delete the watch face

How can you miss that in the instructions

Love love love this watch face... especially how there are two screens. I love the daylight and night settings and all the important information I can set to my watch. Great job y'all, love it!!!!

Very nice. Has become my favorite watch face for my VivoActive HR and my alternate face for my ForeRunner 230. (I normally use Face It for that one.)

I'm in the ET, but the settings won't save. It's dark outside but my watch says that it's still sunny outside. I wish the settings were easier to adjust.

Have you updated your GPS location after installing this watch face? If this doesn't help, please feel free to send me a message through "Contact Developer' link, as I might need to ask some questions to understand the problem you're facing. Thanks.

Please relax sir/madam! Breathe in, breathe out ... It is unfortunate that you make this poor innocent watch face a scapegoat for your lack of savvy and patience :) If you try to uninstall the current watch face with Garmin Connect Mobile, it will not work - it's a Garmin's problem/feature and it happens with any CIQ watch face, not just this one! Please change the face in your watch settings (on the watch itself, not through an external app) and try again. Alternatively, you can use Garmin Express to uninstall without switching to another face. Thanks for sending a message through 'Contact Developer', but your return address appears invalid - my reply has just bounced back ..

Nice watch face!! I doubt if the battery status is accurate. In my case. 'Level' is 44% what is ok, 'time since charge' 1 (i do not know what it means?, it is charged a few days ago): 'estimated remaining time' 373h (that is over 15 days what i do not believe) I use this watch face on a Garmin Forerunner 735xt.

Thanks! The estimation is based on your measured discharge rate over time. I guess in your case 1 hour 'time since charge' means that you installed this face only 1 hour ago. A watch face has no way of knowing the charge history before it was installed, only the current battery level can be read from the system. After such a short use the initial estimation may be too optimistic, especially if you haven't used any heavy draining functions during this time (e.g. running activity with GPS on). The accuracy of the estimation should normally improve over time. Also please note that the estimation algorithm is pretty simple - it just tells you how much battery life you have left if you continue to discharge at your average rate. So the more regular your usage patterns are, the better estimation you will get. It would be interesting to know your update on the accuracy after a couple of days' use.