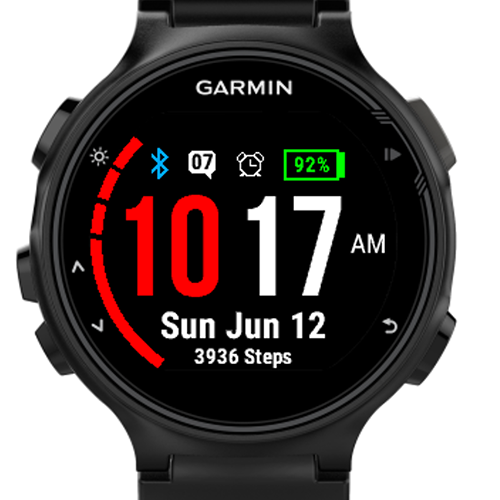 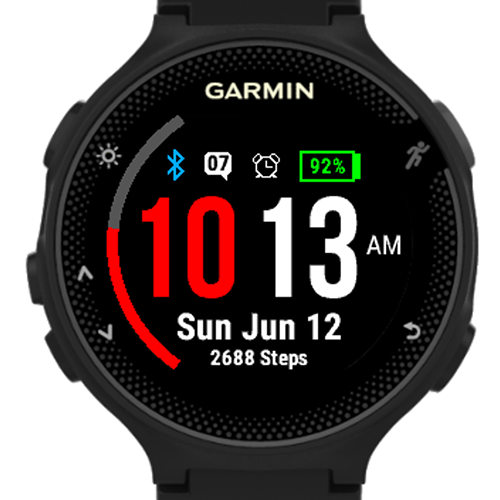 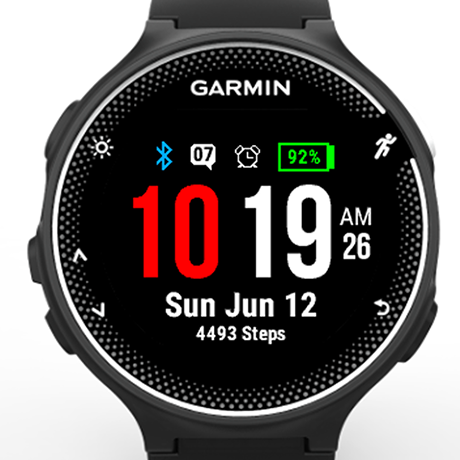 Great, simple, clean and highly configurable watch face. I love it. I have tried 5 or 6 others, and this is the most informative without having a lot of clutter.

My seconds keep disappearing then they will come back up for a few seconds then disappear again. Anyway to fix that? Forerunner 235

This is expected. Please read the description

Very nice watchface. Only I think battery icon is too big. Will be perfect with an option to change it.

Very nice watchface. Only I think battery icon is too big. Will be perfect with an option to change it.

This is the only watch face that retains the look and feel of the stock face with a few extra fields. A few additional color customizations that I'd really like: toggle background between black and white and change Bluetooth and battery icon colors. Great job!

Bug: Seconds keep disappearing. They reappear briefly if you press down then up button. Garmin Forerunner 235.

One of the best watch faces and my all-time favourite. Simple and clean interface. If there's an option for a white background, it would be perfection.

It's ok. I had hoped for a clock color of pink or purple like the stock one has. Also the minutes keep disappearing, but comes back when I press down arrow. But then it disappears again. Also the battery text could be more readable, and wish I could set color of that.

Clean, complete, and easy to read. Thanks!

Please may I request an option to include seconds instead of or including the AM/PM. Great work.. Many thanks :)

any chance to make the step counts number size bigger and a move bar? :)

I recommend getting this watch face as one of your very first ones, because it is basic and easy to read and it helps you to learn how the device functions. It looks a little cartoony in the pictures here, and way nicer on your watch.

This is the only face I have considered using other than the stock one. It is great and improves on the stock one in many respects. My only thought would be to add a move bar in some manner, perhaps a configurable icon that sits next to the battery. Other than that, it's a great face.

I like it! Is more clear than original (digital), show month on date, color and step customization and % on battery But actually some colore don't match the name (dark blue display as light blue) and is not possible to match a color to activity (like original Garmin).

Great bold icons and numbers, very easy to read. Hoping to see color customization in the near future!