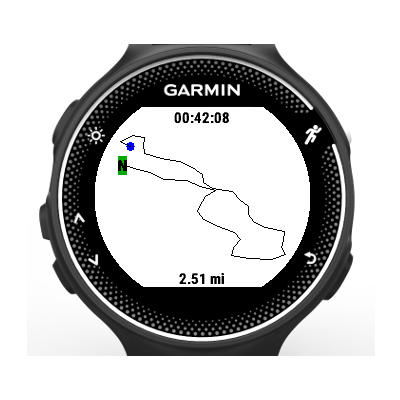 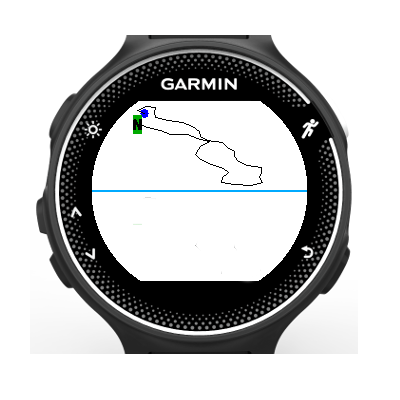 One of the built-in data fields I missed on my forerunner 235 - simply great!

Really nice field. The only improvement I wish would be made would be made is that the current position would be marked with an arrow pointing in the direction I was facing or moving. Sometimes it is difficult to tell if I missed a turn until I have walked enough distance to differentiate the paths. I doubt a zoom function could be added, but if it could that would also help on longer walks.

Very useful app, works without any issues for me.

Great, realy useful. (Would be nice if user could zoom in/out and scroll.)

The memory for this one is VERY tight on some watches, so I can't add much, and there's also very limited (or not any) user input available to data fields.

This is a Firmware problem with the va3 that I reported back when it came out. The firmware reports the heading, and I just display what the firmware tells me. When you switch the button to the other side, the firmware does not adjust to that for the compass. You can see the same if you add the garmin heading date field to an activity.

Phantastin tool and absolutely always on since I came from a FR310XT to the FR235 and were missing it first. Only one thing: When pausing the activity after around 90 minutes for a break and then resume the activity the bread crumbs of the first 90 min before the break were lost and only the straight line from the starting point was left. Am I doing something wrong???

I'll take a look at the code, because with a pause, you shouldn't lose the first part. Use Contact Developer, and mention how long you've paused for,etc.

Love it in VA, although I would like to see distance available in VA. If the app allow zoom would be perfect!

The amount of memory for a data field is limited, and more so on the va than newer devices, so adding zoom likely can't be done. I could add total distance on the va, but that would reduce the size of the chart. I'll look into it for full screen layouts on the va. .

Great application. Simple and useful GUI. Quite good projection of track details. Battery consumption does not increase. I see also downside, but only one. In my opinion the ratio betwen X and Y axis should be fixed 1:1, so that the shape of track will by alwas in shape of real track. Now I see that the span of track is expanded on full screen independly for each axis. So ex. if my track has 9km vertical span and only 1km in horizontal, then the track looks not natural on the screen. At least on my FR 230.

That's kind of a tricky thing. Consider the vahr vs a round watch. 1:1 would look different between the 2. I went with lat range vs lon range for scaling, as that give the most detail on any device.

When you resume, it will start back up.

It would be nice to add a scale grid.

Good, but I would love to be able to zoom in order to see where to go to go to the start point when I'm around (On the chart, I'm on the point, but in reality I'm not.) Also, it could be nice to display an arrow to show if we are running up/down/left/right of the chart.

thank you ! but I still have a meesage : "needs differention DP" what did I do wrong !?

Which watch? On most it must be used on a data screen set up for a 1 or 2 field layout

Great little app working as data field! Proving a full overview of your run map. Much better to native 735XT implementation where you see a zoomed in part with no way to zoom out.

wanted this for a long time. thanks

thank you for made it . its good if its can zoom in and out. this application rise vaule of fenix 5x up .

I love this data field! works great and it is very useful when you go to new places :)

It's like any other data field. If you for example, go into "run Settings" for run, and then data screens, you can pic a screen you want it on, then select 1 one or 2 filed layout, you then file find this under "Connect IQ" when you pick what you want in the data field.

after you're taking a break and the garmin switches to standy-mode, the chart doesn't show the way between start and resting-point anymore (a straight line appears). if possible, please improve it. apart from that, the data field is great and gives correct infos.

Great app! Fits the whole map on a screen, nice idea about showing direction of current run with a little letter. Something that 735 should have built-in in the first place!

The data field will appear unter "Connect IQ" when you select a data field. You get to in in the same way you change to a native data field.

Good app, ist would be great if a zoom function could be added.( e.g. press and hold down button), to zoom in larger tracks.....

Memory is tight in this data field, and also, data fields don't have access to buttons. Sorry!