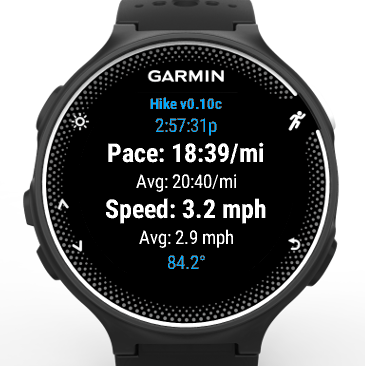 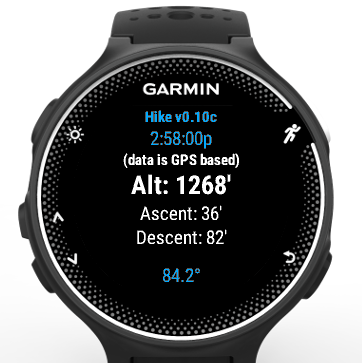 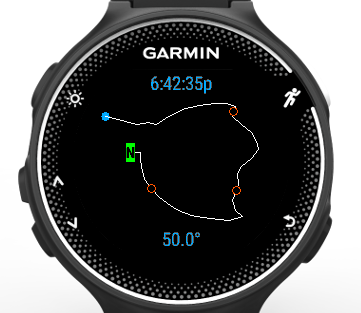 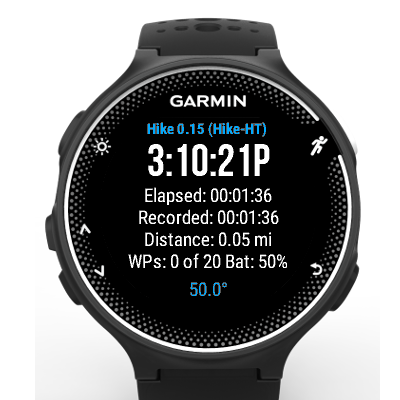 The crashing of the forerunner 230 has stopped! Thanks for the update! Cheers

Nice app, i was so sad that garmin not put a default "walk" profil. Thanks fort that. I have my first crash today on a forunner 235. for your information i did'nt use the waypoint option.

It crashes my forerunner 230.

Unable to sync some walks to phone when others sync fine.

What a fantastic app! Love the data it displays and logs on Garmin. Accurate! Fantastic!

Great app! Works great on the Forerunner 235. I found it to be very accurate at any distance.

Great app, really great app. Some minor changes I'd appreciate for further releases (some of them as others mentioned before): * usersetting black on white (i.e. reverse) would be nice * usersetting enable/disable some screens would be nice too (p.e. I don't use the one between "alt" and "elapsed" * some more waypoints - if possible * metric speed is shown in "km/h" (as it should be) but titled "kph" * a graphical GPS-Kompass would be nice * visualization of altitude would be nice in background! of the "alt" page - if "background" is possible Nonetheless this app is far better then anything I've seen from Garmin themself on this subject. Beside that I really love the entire app - I also love your tempe integration:) FR235; H0.14c; FW4.10

It is having troubles to get a gps fix and it made my forerunner 230 crash today and I lost the data. Hope that is will be fixed, it is a nice app. Don't understand why this is not a standard app on Garmin devices.

Thanks for kaesy's kind help, I have run GPS app successfully . And I'm sure I can run this app same way!

Better than Great! Can't believe this isn't a standard feature.

Excellent app returning lots of good and reliable information. Forgive me but what is the difference between a walk and a hike as far as the app is concerned?

Seems like the app is really useful, however, it can't find the GPS.

No so much gps position accuracy for the rest is good

great app, everything works and an incredible amount of data (FR235)

This is a solid and useful app. It offers some capability I don't see with other apps. I'm running this on an Fr230.

Downloaded yesterday and tried this new app today. Went for a walk on paved trail. Recorded breadcrumb trail and a variety of waypoints along the way. Worked great! Possible improvements....perhaps more user customization on data pages....perhaps "track up" option on map page. Nice work I will keep this app!

I hike often and use this app every time with my 235. It's really great. Tracks ascent/descent and lets you mark waypoints along the way in addition to many other great pieces of data. Highly recommend.

Works great on the 235. Thank you for a great app. If you are looking for improvement ideas, here are my 2 cents; - ability to get hr; and cal burn and avg hr by hr ant+ or ohr. -option to reverse colors to white bg, black text.

Never connects to a GPS

I had some trail runnings and used this app. I liked it very much. It shows GPS altitude and total ascent and descent.