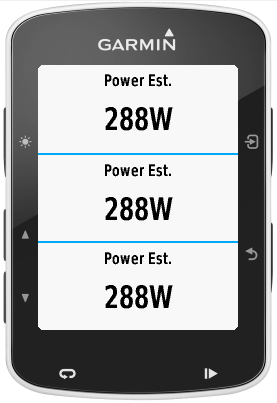 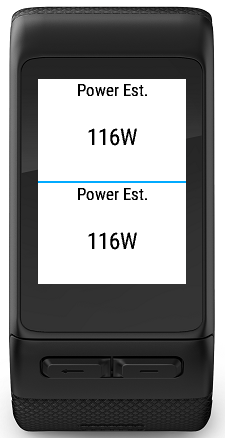 It's ok, works as expected. Strava's power analysis graph jumps around from very high to very low readings so assumed this would do the same .. and it does. Would be cool to have overall ride averaging or 3 second averaging rather than have the data change too fast. Polling frequency shouldn't be hard to implement or adjust plus the averaging may help give more 'realistic' estimates.

Loved this for my 820 upgraded to 830 Could you make compatible? Thank you Chris

Can’t really trust the displayed data. How is that even possible to generate 375 watts while 1 sec later you generate 25 watts once you pedal the same cadence same pace?

Let's talk honestly, this data field is not a perfect replacement for a potentiometer but if it is a good guide to have a reference of the individual performance for those like me who do not have those devices. This is why my recommendation is to eliminate from the visualization some solutions of the estimation equation of power that the only thing they do is make the information illegible during the exercise, and instead leave only the average power, maybe it is not the actual watt data, but it will be much more useful to keep a pace when pedaling. Thank you for keeping this data field available. Great job!!

Can the average power and maximum power be included in the activity summary?

Any chance that it gets available for the 1030?

on edge 1000, the graph has few high peaks like 1500 watt so it becomes very small to read. also, clinging an hill, the display often shows low values like 30 watt even with constant or increasing speed

Only IQ logo display no data does not work for vivoactive HR!

I want to install the app, I wonder if the problem with data compatibility with strava was solved?

App does not work at all. Data field displays IQ! as the watt value. Really wish the App Store would require whatever is published here must work before unsuspecting users get stuck with trying to undo damage caused by useless apps.

Totally messed up my ride stats!

As below, it corrupts the file export to Stava and gives you nonsense data. The real time power estimation seems to be ok and is a good real time number to work to.

Good idea, but the fit-file gets corrupt with this App. Its only readable by Garmin Connect. Strava reads wrong data. Other services cannot read the fit file with this App installed. Data displayed during a ride are very fluctuating so that no evaluation is possible.

Same problem,send an email request but no reply..from other review seem a good app,hope can help to advice

I also have a problem with Vivoactive HR, nothing about the activity does not show! Only IQ logo and exclamation points. Watch the latest firmware and apps. Thanks..

Excelent, yesterday I have a problem, I sent him a mail and now with the update it's working! Thank you very much, Mateo

Hi man, I m having the iq with yellow sign problem!! I have the last software on the watch and the last update of the app. I have the vivoactive hr. I will thank you very much if you fix that. Greetings!

Pretty similar results to my Stages powermeter on my roadbike. Though a little fluctuating. But ok for training. Used it on my 735 HR on my fixie bike. Would have been great if it actually recorded the virtual watts and put them on Connect.

Great ideia but the performance is really bad....data keeps changing values with no sense...Could at least when cadence is zero (when you use sensor and in my case I did ) shows 0 power,but even with no pedalling it shows alternate values of power.