A Pomodoro timer app for all Garmin devices!</p><p>Use the Pomodoro technique (https://en.wikipedia.org/wiki/Pomodoro_Technique) to increase your productivity.</p><p></p><p>________</p><p>Features:</p><p>• A lightweight and clean implementation of the Pomodoro technique.</p><p>• Keeps track of time left in your Pomodoro session, as well as break time and overal number of Pomodoros.</p><p>• Mimics the ticking of a real physical Pomodoro by using short vibrations (disabled by default - change strength of vibration setting to a non-zero value, like 60 to enable).</p> 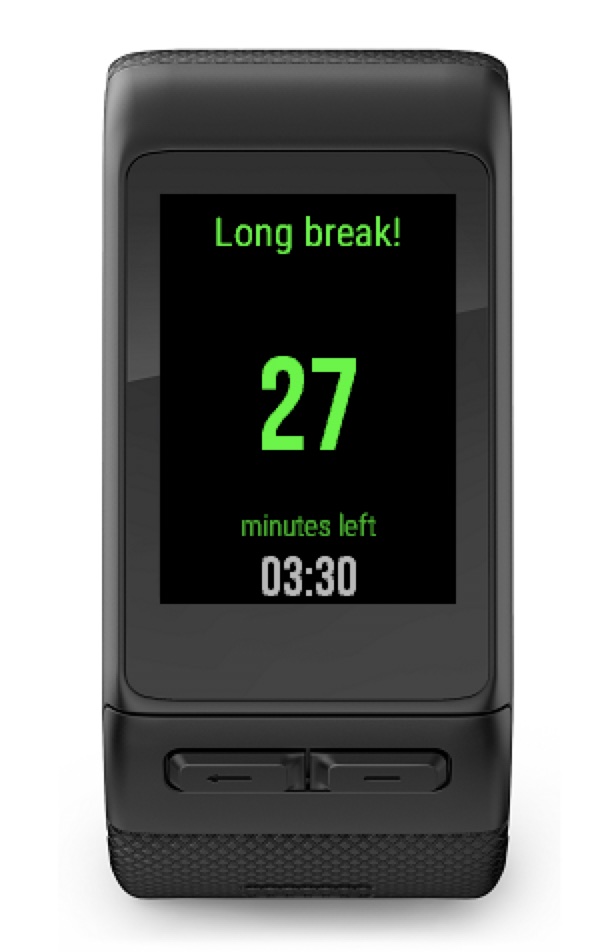 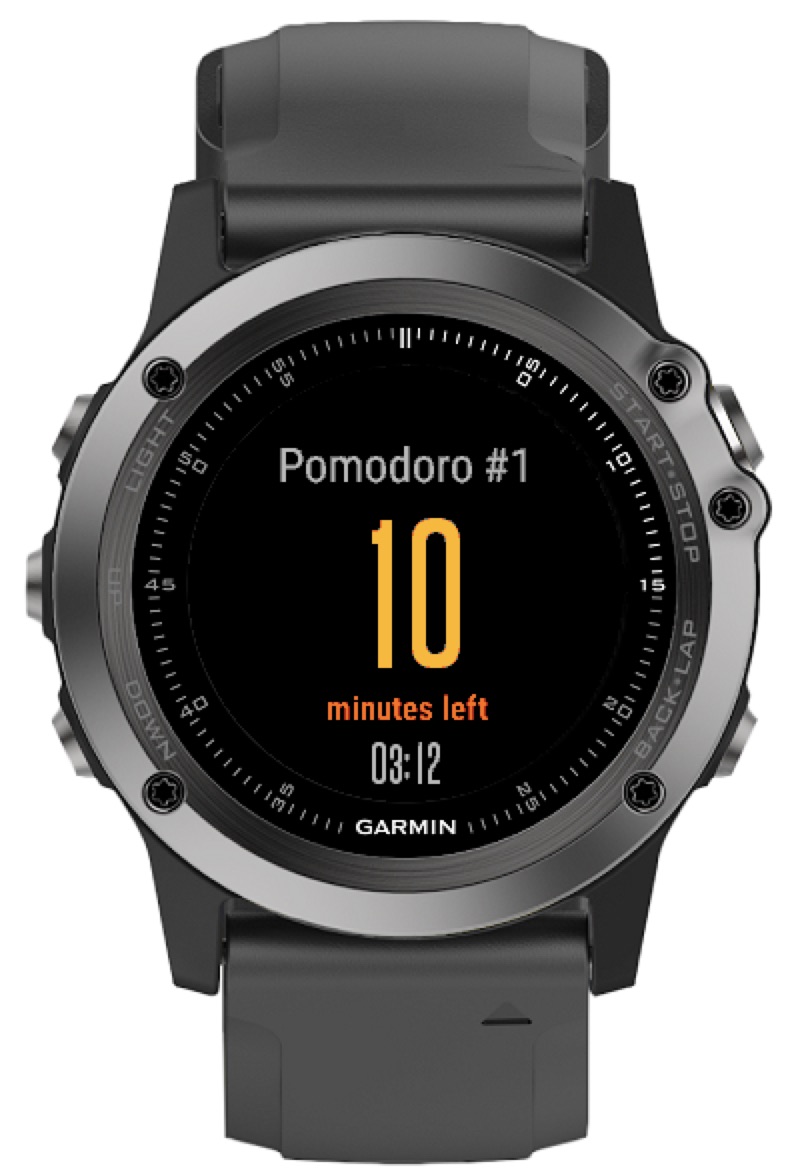 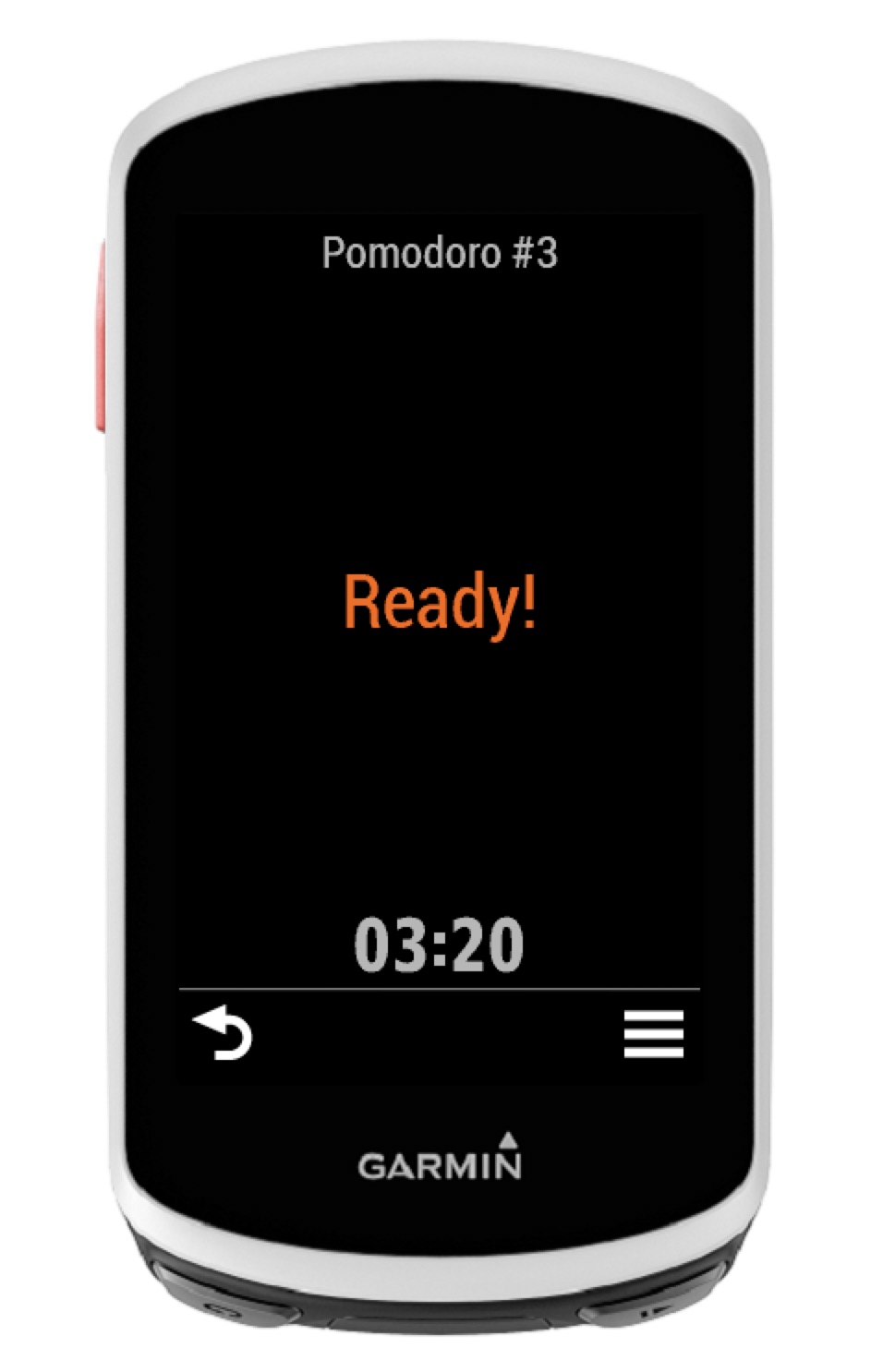 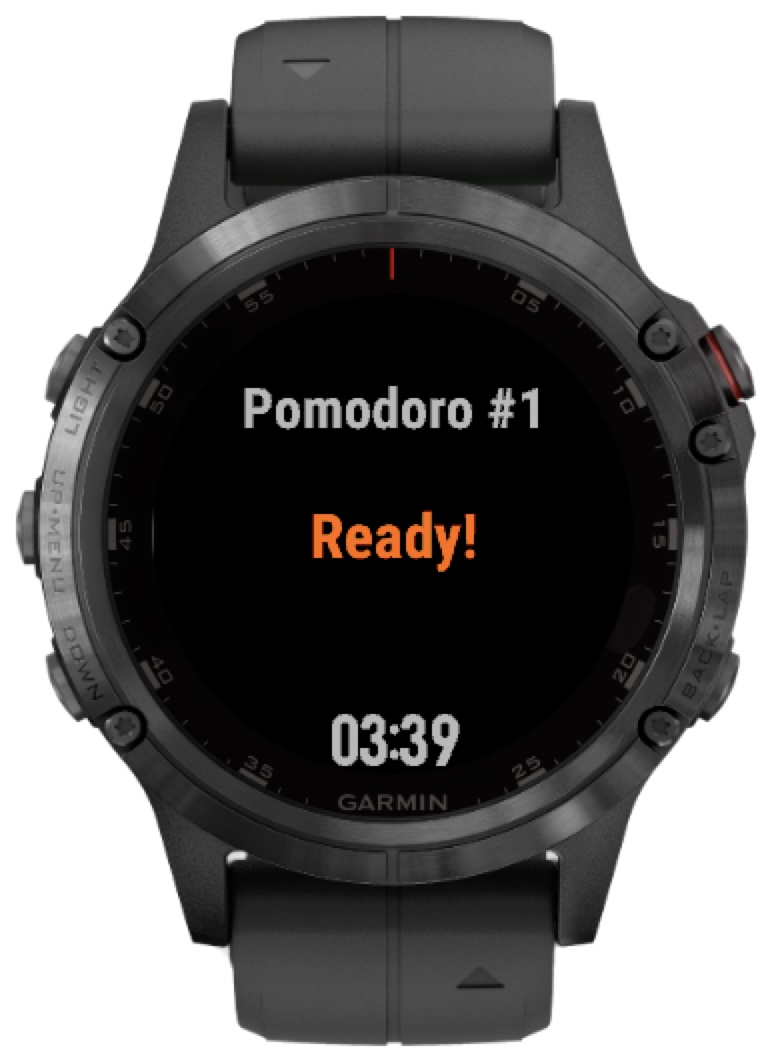 With the vivoactive 3, this app will shut off if swiped off the screen or if my arm moved while studying. I had to restart the Pomodoro session five times and it never worked.

I like the concept. Granted its simple and like others have mentioned, it'd be nice to be able to switch back to the main watch face but it's not a deal breaker. I haven't tried the app with the sound alerts on but as I have them muted now, I get no feedback when pomodoro has completed or when my break is up. I have to look at it see when my time has lapsed. I have the vibration set to 7 and duration at 100 and I feel nothing on my FR 645 Music.

I have started using this app for work on my Vivoactive 3. However - there seems to be a bug. When you adjust any of the settings - I just get an IQ! Error on the device when starting a pomedero.

As a user, I tap start after the app says it's ready and does not work. It shows a screen with "IQ!" instead. What else can I try to make it work?? Forerunner735XT

It's almost perfect, it only lacks feature to let you run pomodoro in background. On my vívoactive 3, I can run activities like Walk or Treadmill in the background, but whenever I swipe pomodoro to the right, my progress and timer is lost. So for me Exit button in menu feels redundant. The walkaround for me is to set watch to auto-lock so I don't accidentally swipe it to the right (finding out that the app is off during the cycle is really disappointing and frustrating). Anyways keep up the good work! :)

Really like the idea. This could be my default pomodoro timer! However, I also notice quite a lot of battery drain (and I have strength of vibration on every tick set to 0). This is on a Fenix 5S Plus. So as is, unfortunately not really useful for me on a daily basis. Will give 5 stars once this is fixed.

Really good! The only reasons I didn't give it 5 stars are because I keep forgetting to press start at the start of each new Pomodoro and would like it to autostart (or at least have that as an option) and because I would like to be able to pause. I saw from the developer's replies below that he deliberately hasn't put in a pause feature because he sees it as part of the technique that you shouldn't let yourself get interrupted and if you do you should start the Pomodoro again. From my perspective I would only use the pause feature to extend the Pomodoro though - for example if I had four minutes of work left to do on a specific task and was in the flow I wouldn't want to stop, but also wouldn't want to have my next break cut to one minute, so I would prefer to hit pause while I finished the task and then get the whole break. I can see both of these are things to do with my own usage style, but for me they would improve it. Overall though it is a great app!

Review for Garmin 920XT Oh my word! This a rockstar app, hands-down better than any pomodoro app on this platform, with no performance issues what-so-ever! Hi Mr. Developer! You rock! The quality of your work reflects in your app's stellar performance. It's so good, I'd pay for it! 5 stars and would love to check out your other apps.

Works great on vivoactive 3 music. It does what it's supposed to do. Only tiny thing missing from pomodoro technique is the counter of a larger break on the fourth break (15 minutes).

Thanks for the review, Juan! Though, not sure what you mean by the missing "counter of a larger break on the fourth break"? There _is_ a larger/longer break after three short breaks - and you can configure the duration of both to your liking :) See the main page for details - the defaults are the standard 5 and 25 minutes respectfully. Hope this helps!

Love the concept, I like the idea of using the Pomodoro technique without using something like a phone, but it unfortunately has two problems that made me deinstall the app. Firstly, the battery consumption is pretty high on a one month old Forerunner 645. Secondly, there is no way to exit the app and without resetting the timer completely, which makes it impossible to even check the time on a smaller of longer break.

Hi, Joris - thanks for checking out the app! I've tried my best to keep the app as light on resources as possible - however, at the end of the day, it uses the vibration motor every second. Unless you're not using that feature - in which case, please file a bug report and I'll try to look into it. As for the second issue - that's highly dependent on the watch model you have (some allow putting apps in background, like my Fenix 3 HR). However, as a workaround, I've added always displaying the current time in the newest (v1.5.0) version of the app - hope you'll enjoy it more now!

Hi. The app is awesome.But there is one main problem wich can be fixed:App will exit if swap right.Looks like it doesn't work fully asynchronous. Is it possible to fix quick?Thanks!

Nice and clear, would be really great the ability to remove the noise and have only vibration for alerts. Keep the good job.

Thanks for the review, Kose - please check out the newest version of the app (1.4.0). I've added a setting just for that! (you can toggle it using Garmin Express). Enjoy!

Sorry to hear that, but I'm fairly sure it's not this app - I've put extra effort to make it as simple and easy on the battery as possible. Of course, it's using vibrations and all, so it's not without impact on the battery, but "incredible draining" should definitely not happen. I'm using it daily and have not noticed anything like that - I wonder if the battery on your watch simply has not started to show signs of use (as all batteries do sooner or later).

The app works great regarding its purpose, however, it cripples the primary, main and ultimate function of every watch, namely displaying the time. As the app is not working in the background, swiping right to dismiss the display and show the watch face not only disbands the current Pomodoro, it also ruins the complete progress achieved so far, since restarting the app starts from Pomodoro #1. I'm pretty sure there's room for the time using a small font to make it unobtrusive.

I love this app.

It used to be my fave app. I use it daily n heavily. Now it drains battery like crazy. Please fix.

There have been no changes to the app for a while - so I'd wager it might be something else on your watch. The simplest explanation would be if you're using a custom watch face - some of them drain battery very quickly. There might have been a regression in the watch's firmware as well (though, less likely). I can assure you that preserving battery life was one of my top priorities when developing this app - and as a result, it needs very little resources. I use it daily as well and have not noticed any changes with respect to my watch's batter life. Please try resetting the watch face to the default one and see if that helps. If not, feel free to contact me using the link on app's page so we can troubleshoot this further!

Very simple and does what I would expect. I was struggling a bit how to turn of the sound on the end of the pomodoro (I prefer just the vibration) and I found out app uses the system setting. Besides that I have no problems with this app.

How can I put timer on pause?

No, I consider it a feature - just as you can't put a kitchen timer on pause (at least the classic ones). If you've started a Pomodoro, you should strive to finish it. If for whatever reason you must stop and attend to something else, you effectively break your focus and it would be counter-productive to pause the Pomodoro. You just need to accept that the interruption broke your flow and you need to restart the Pomodoro. At least that's my take on it :)

Does what it says!

Hello. Where is setting to change time period to 10/15 minutes and how to disable permanent vibration

Not working on my fenix 3, cant open settings or exit the app without restarting the watch

Unfortunately, it's not something I can fix, it's a bug in the watch's firmware: https://forums.garmin.com/forum/developers/connect-iq/connect-iq-bug-reports/1271079-device-crash-err_log-txt-fenix-3-hr-sw-ver-430-450

Very good app. I enjoy it a lot for tasks that I don't really enjoy :). Two issues in the newest version: It would be nice to be able to set the buzz/no buzz from the app, not from the phone. 2nd issue: when I try to exit the app it resets my whole watch (I have a Fenix 3 HR).

Unfortunately, it's not something I can fix, it's a bug in the watch's firmware: https://forums.garmin.com/forum/developers/connect-iq/connect-iq-bug-reports/1271079-device-crash-err_log-txt-fenix-3-hr-sw-ver-430-450

Not bad. After tweaking the settings, I'm reasonably happy, and will use it for my work this week. A shame the settings can't be altered on the fly - you need to hook a cable up and use Garmin Express to change simple things like the timer length. I think the 'per second vibration' should be disabled by default, rather than having to install the app, realise how irritating the vibration is, and then have to hook up the cable again just to disable it.

Thank you for the feedback! As mentioned below, I'll look into introducing some of those settings into the app itself, so that it's easier to modify them on the go. See https://github.com/klimeryk/garmodoro/issues/1#issuecomment-331624926 for the full explanation why I think the ticking feature is very important and why it's on by default. I've opened an issue on GitHub to track progress on introducing this setting to the app itself: https://github.com/klimeryk/garmodoro/issues/5