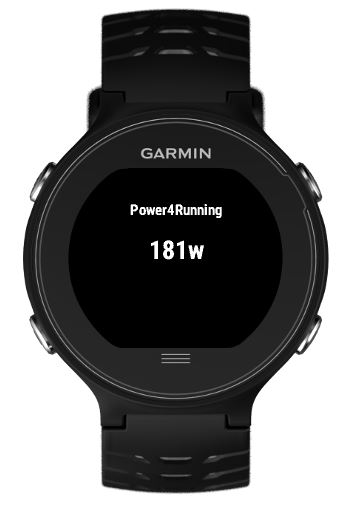 It just shows 'IQ!' on my Fenix3. Is it possible to get it to work on this watch?

it would be possible to do a version for fenix 5x?? Thanks

great app..but could you make it so it records info into .fit file?

I've been using this datafield with my Fenix 3 for several months now and the current version gives good relative instant power output, that are in line with my perception of 'effort', and the absolute power numbers seem credible now too. The success I am having with Power4running may in part be because I use a foot pod for pace/speed whilst running. The separate Stryde running power sensor uses a similar accelerometer derived pace (and barometer for elevation change), so it makes sense that Power4running will work better with the more consistent foot pod derived speed rather that the 'noisy' GPS speed that must be 'damped' (F3 already has a barometer for elevation grade calcs). It would be great if this datafield could be extended to write the power data to the .fit file, now that CIQ 2.1/1.3 are out; we could then finally analyse how the figures stack up against Stryde and post processing methods.

Thanks for the great work! Using it on a 235. It would be awesome if the font would be adjusted to the field size. If you have only one or two fields the font stays very small and can be hard to read. Hope than can be updated.

It works in vivoactive. Only sometimes if I wath the data too much time, It show irreal data. Good job!!!!!

Now it is working and seems that the values correlate with effort ( peace and/or slope). Grate job thank you. Just only one request, would it be possible to enlarge (customize) the display number? I use it on 1 field on fenix3 display only ant for this it is quite small

Forunnet 235. I got en exclamation symbol and it does no work. I tried to configure it with diferent values but still no luck. What it extra weight setup parameter?. How can make this work?

Thanks for making this APP. There seems to be an issue on the 920XT. I get the Connect IQ! error and no power number. This is outside, with GPS, phone nearby and run mode started.

I tried it just now and encountered two issues: 1. When I started running, it showed values much larger than the value in the example image in the Connect IQ store. Could you maybe give a short description of what the app is supposed to show and what values mean? Or could you provide a link with more information? 2. I had to stop during my run and the watch auto-paused. When I started running again and the watch started measuring again, I lost the Power4Running. It only showed a Connect IQ icon with an exclamation mark. Hope to hear from you.