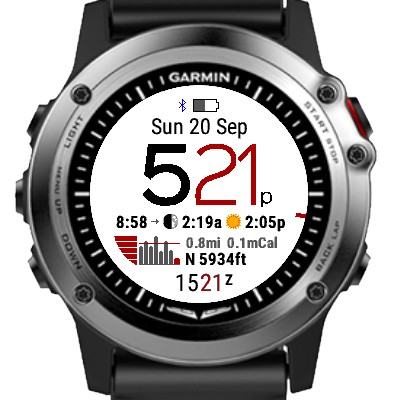 Can you add weather when is available?

This in my opinion is the best watch face by far. All the data is useful and at a glance. I'm not sure about the battery drain in that I have only had it for a day. Please keep up the great work whoever made this face and many thanks for this. Great military application!

Very Nice. Even better if you could make a black edition like for the pilot one. Thanks!

Great face. As i'm not stepping much around while flying, a pressure history graph would be preferred over step/health stuff.

Greet watch face. Been waiting for someone to place this type of data on the face. Love the white background, easy to read. One issue though, just updated to firmware 4.70 and the sunrise/set data is not calculating and the battery charge level not showing.

GREAT watcch face +1 steps instead of UTC +1 black background THANKS A LOT!

Love all the info at a glace, great Job!

Same as Mourk.D!!! I don't use it because of the lack of steps!! Steps instead of UTC would be great (different version, maybe?) Very nice watchface!!!

Great face!!! i love it. Beautiful and full of info. I could use the steps count instead of utc time but thats only me !

Nice clear face, but I agree with the builder, it is a bit cluttered. How about removing the histogram, distance etc (the activity info) and make UTC a bit bigger. It is then a nice pilot watchface with dual time, elevation, SS and SR :-) Now UTC is a bit small. With a larger UTC the D2 Bravo is becoming a true pilotwatch...