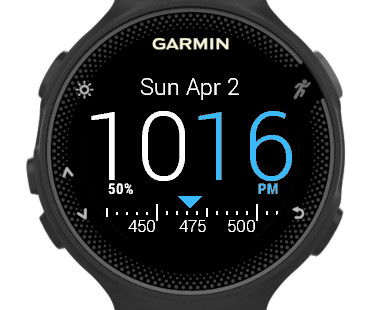 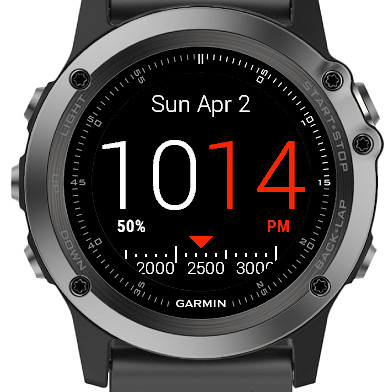 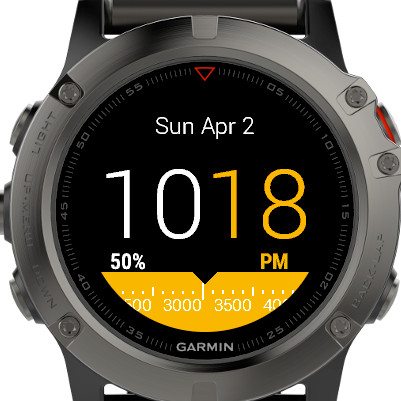 I love the design! The meter is such a good idea! Thanks dev! :)

Like the design, but you only have the ugliest version available free. Arse.

I like your watch face, but the week number switches on Wednesdays :)

Another great, crisp, clean watch face from a great developer. Thanks!

Nice. But I record higher consumption. In the dial data I would add the option "battery" and "none"

Nice indeed, but can we get an hour and dial values colour change in the future updates? Thanks allot!

Very nice watchface. Would be great to see a bold font.

One of my favorite digital faces... I keep trying others, but keep coming back to this because the lines/design are so clean. I'd still like to see an option to drop the leading zero from the hours. Otherwise, the only suggestion I'd make is to add notifications as an option to the custom field. Someone else did mention replacing the am/pm field with a second custom field, which given that this is a paid face, I'd agree is a reasonable request.

Excellent the best which i ever had btw because im from Poland can you fix the Wendsday in Polish it will be śr not sr. whats more do you think about ant other functions like smaller fonts, any other fonts or else. I bouhgt it and im pleased.

Hi, Thanks for your review. Sorry but the current font I'm using to display the date doesn't contain special charater like "ś". Cheers

Good face! Crisp and clear. Would be great have the options (1) to modify icons color, (2) display Bluetooth icon only when phone disconnected, (3) show battery only when left 20% (or 10, 30, etc)

nice, maybe a notification or bluetooth icon will be good

very nice watchface. so nice that i bought already. If it is possible, could you make a second field, where i can choose which data i show ? Instead of PM. Thank you very much

Great, but the paid optional field does not work with altitude. It just stays at "0" feet at all times.

It's okay, but I would like some more customization options.

Excellent idea! I will be adding more options soon. Cheers :-)

Nice and clean! Thanks!

Very attractive and nice amount of customization. It reminds me of my favorite pebble time watch face. Request: an option to remove the leading zero.