Bontrager Light Control data field gives you the ability to directly control the modes of any connected Bontrager RT series lights. Once the lights are paired with the Edge computer, the data field will display a graphical battery status, and buttons to quickly change the mode of the connected headlights and taillights.</p><p></p><p>To Setup:</p><p> 1. Download and install the data field to your Edge computer</p> 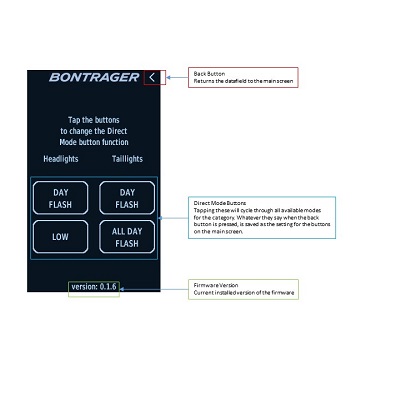 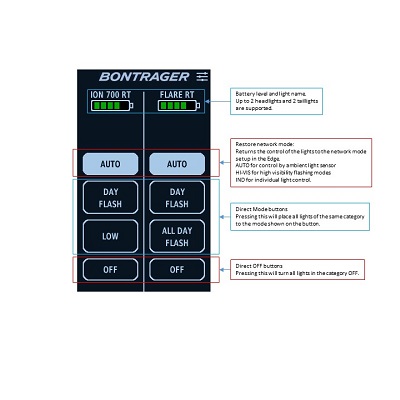 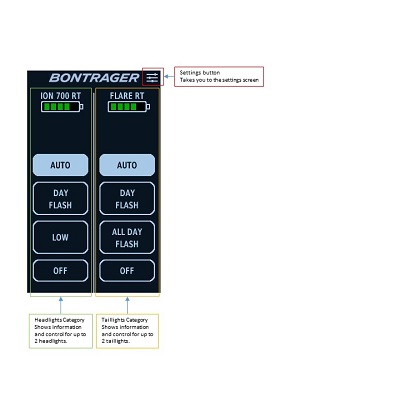 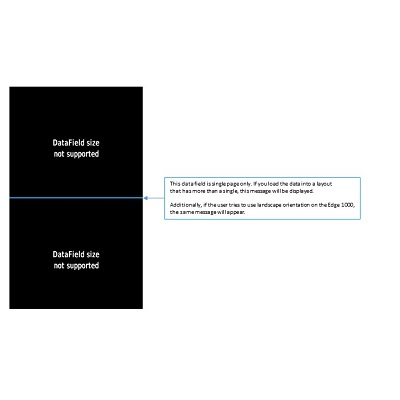 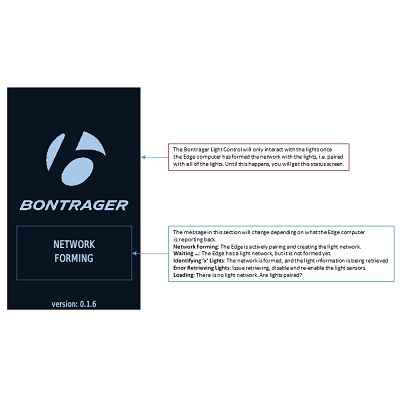 I had no problems pairing my Garmin 1030 to the ION 200 lights (front and rear). Once paired, I was able to use this app to control the lights.

Bad app crash on Garmin 1000 after one hour headlight turn off (ION PRO RT). I have to manually turn on. I did the factory rest. My G 1000 show on screen “?” Is frustrating

it'd be nice to se just one column if there is only one light present and not two with not of them greyed out.. app works flawlessly apart the fact that if there is some change in the Garmin light menu, the selected light mode in the bontrager app disappear so it has to be selected again.

Does not work. I'm using a Garmin Edge 830 with a Varia Light/Radar 510. It's stuck with a message that says "Waiting for Network to Form"

Controls Ion 200RT pretty well (once network is ready... which may take a while), but can only turn off Varia 510 (in version 1.3.2), remaining options don't work. And once off you can't turn it back on from the app. As partial workaround you can use Tail Light Field to turn on/off your Varia 510 from (another) data screen and limit this app to control head light only. Disappointing experience. Trek, it is time to update this app.

after you lear how to add the add con control the different modes its all good. only bad point I found that the light ambient sensor does not work when connected to the Garmin. for example, if you are riding at night, and a car gets close to you, the sensor detects the ligth bigness if the car and increase the light visibility (to day visibility mode). its a very strong security feature that you lost when conected to a Garmin device. another thing that I may recommend is the AUTO OFF of the light when your ride is in pause for few minutes. and auto on when you start riding again. this feature in very cool on the Garmin Varia light.

Like it very much, i always recommend it to others ..

Multi lights front and rear, does not allow user to change mode for each light that is grouped in front or rear.

Got it installed, but can’t control light output as I’d hoped, so I will before uninstalling it.

I managed to install the app and pair it with my Garmin, despite the confusing instructions. However, every time my Garmin turns on, the light also turns on, including when I plug in the Garmin to recharge it. That is a sufficient enough of a problem that the app may be coming off of my Garmin soon.

So far so good. The only weird thing i see on my Garmin 830 is that the "swipe down" widget screen doesn't match the screen you create with the datafield. The datafield screen allows you to change the override button functions and everything works great. The "swipe down" widget screen is forced to different override buttons that can't be changed. Some of the modes don't seem to work such as flash on the Ion RT200. I'm on Garmin fw 4.10.

I am try to install the app. The installation is not finished due to incompatibility. I'll try again after the next update and will recheck the rating.

I did use this APP with my Edge 1030 and the an Garmin RTL 510. When will you make it compatible to the Edge 830/530 ? And can you please invert the screen on day time to black text on white background?

This is just a terrible app. Trek should be ashamed of it. I bought a Bontrager 1030 and a varia radar. The app does not control the varia. The app has 4 settings. Independent, night mode, day mode and off. The only mode that works is off. Once you turn it off you cannot turn it back on. Also the app disconnected tonight on a TT race on a highway 12 times in 34 minutes and 48 seconds. Makes a safety item completely unsafe and pointless. Also there have been nothing but problems with the reviews for this app and it has not been updated in a year? Trek and garmin pull your heads out of your buts and at least give us the garmin app so we can safely use our radars!!!! To make it worse there is another app that you can add to a normal 1030 that allows you to control it but it is not available for a Bontrager 1030. What garbage! Tail Light Field https://apps.garmin.com/en-AU/apps/b20762ef-7027-45d5-84fc-220777b7627f

Really wanted to love this, but the lights are continually in a state of connected/disconnected/searching mode. This triggers very annoying alarm beeps (yes that can be turned off, but I like the alerts for my maps. Also the lights just intermittently work, which is not the purpose of having lights. And aside from being distracting it sucks the battery life of both my Garmin Edge 1000 and the lights. I finally disconnected all of this and now just manually turn the lights on and off. Seriously - it really isn't difficult to push the button. And I am now stress free, my lights last longer and I just don't need to think about them. Don’t bother with this it just doesn’t work well and is certainly not worth the energy spent trying to make it work. Good idea, bad experience

This is pretty weird. I’ve got an ionRT and a FlareRT the Flare works pretty much as you’d expect but the individual controls for the Ion seem to affect the Flare instead. On Auto or “high vis” pre-sets, it seems to control both fairly sensibly, just trying to set the front one to a custom setting doesn’t work. And I don’t know why using “timer start” as the turn on command doesn’t then turn off the lights when you stop the timer. You always have to turn the garmin (I’ve got a 1000) off to turn the lights off. You can do that while paused and it does work but I’d have thought just hitting stop would do it.

I'm very disappointed in this app. I selected these lights in part so they could be controlled by the Garmin, but the app is aweful. There is no documentation, and the tiny pictures on the app info page are too small to see, and when I save them and increase the size the fonts are not readable. The app itself doesn't work right. When I use the buttons to set the headlight, it turns on the taillight, and so on. I thought activating the lights when I start riding would be useful, but they don't turn off when I stop riding. I'll be returning the lights. :-(

Setup instructions for Ion Pro Rt 1300 light and Edge 1000 are almost non-existant. The actual app is glitchy. It shows a high and low button but when I select high it immediately jumps to low.

the latest headlights Ion 200 RT and Ion Pro RT are not fully supported. The flash mode selection is not effective, selecting it brings no change. The only way to activate the flash mode is to be set to "Auto" mode. I hope this will be quickly fixed.

Fantàstic App. The battery of my flare RT is longer that with Garmin App