Indoor Walking apprlication. Records an indoor walk as an activity.</p><p>All screens show time of day, and Temperature (with a Tempe Sensor) and/or Heart Rate (with a HRM)</p><p>Footpod is also supported.</p><p></p><p>There are 4 Screens:</p><p>-Time/Distance</p><p>-Speed/Pace</p><p>-Steps/Calories</p><p>-Cadence</p><p>(note! Cadence screen shown here is based on a simulator data and is strange! Works on real devices though.)</p> 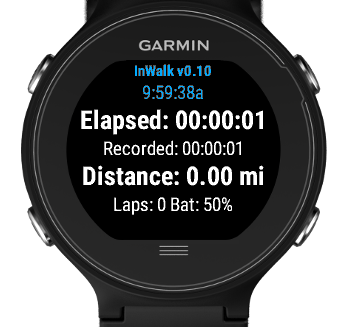 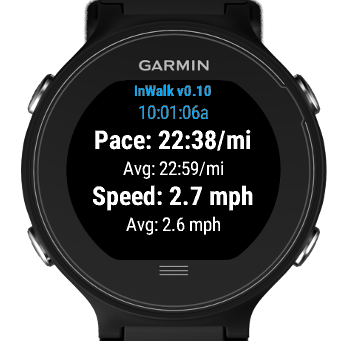 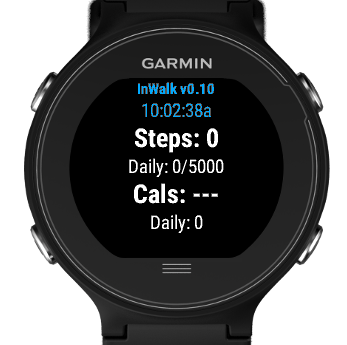 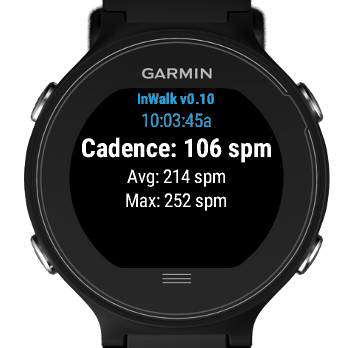 Great app! Is there a way to get a save and calibrate option similar to treadmill run?

Great app! Searched and installed it 5 min before IW-workout. Any plans to add the possibility to show the heart rate as primary information (with BIG numbers) FR235?

Great app! Any plans to add to Fenix 6 series?

As devices like the f6 and 945 already have indoor walking as a native app, I probably won't be adding them to this app

I've used this app for 3 years. Surprised that it's still the only option for indoor walking, but it's a compliment to the app developer that he filled this niche

Results show about 50% of actual walk. Tredmill showed 5k which is spot on with what i would expect. App results were a little over 2k.

If you are holding on to the treadmill bars that will impact this, as will what you have set as your stride length in Garmin connect.

Only used this once on my Fenix 5 and Garmin Footpod, did a 1 mile walk and it was pretty much spot on with the treadmill.

Works great. I have 235. May be a little off on distance inside, but close enough.All the reviews on the steps, the watch counts the steps, even when I had the Vivioactive 3 and it had the Walking as an activity, the watch counted the steps, same as now. So if you want to records walks, I recommend this, at least for the Garmin 235. ( Make sure you swing your arms natural inside or on treadmill!)

Tried it on a treadmill - treadmill indicated 2.06 miles, the app recorded .93 miles! The app also indicated that I burned more total calories than the treadmill. I walked with heart monitor but no foot pod. Also, the font is so small it very difficult to read, especially while walking.

The watch needs to see your steps, so if you are holing on to the rails, that could impact your distance. Try keeping it in your pocket. Also, which watch?

superb application, at least for my fenix3 hr

Finally, an indoor walking apps! Garmin miss this. Thanks for creating this one.

Will the app work for shipboard walking? I suspect steps will be fine but distance will be way out.

It doesn't use GPS, so I think distance will be fine, as it's basing that on the number of steps. But I haven't tried it.

Save your time, unfortunately it doesn't work. I own a 735xt and I tried this on my treadmill... NOT EVEN CLOSE! No foot pod or nothing.

What isn't working for you? Please use "Contact developer", as it could be something like what you expect a FP to do for you.

I appreciate this application. Unfortunatetly, it does not count the steps of a foot pod. Please support it!

24/7 Steps come from the watch and not the footpod. On something like a treadmill, make sure your watch sees the steps, as you'll likely miss a bunch if you hold on to the rails.

This app is great. It does exactly what you'd expect, and does it perfectly. Garmin dropped the ball by not adding a "Walking" activity to many of its watches. This lightweight app is the solution! Also, the developer's support is incredible. He's very accessible and quick to make improvements based on user feedback. Couldn't possibly ask for more out of a FREE app. Thanks a ton.

The speed and steps are WAY off.

I just display what the firmware tells me, What watch, do you have a foot pod, etc?

I used to use this app but lately it has not been recording the steps I've taken indoors correctly. Today it was off by 4000 at least. It showed 2800 after 35 minutes. Yesterday it showed 6800 and day before 6300.

The distance and speed are way off.

That's what the FW is reporting and I display. What watch, using a foot pod, etc?

sucks, i'm really angry because i saw my trainings results just wont be stored. They are neither visible on Connect nor on my watch. Really disappointed because i basically like the face etc.

The contact developer link isn't working for me. Since the latest garmin update to the vivoactive I have been getting serious battery depletion using this app. I can't go 4 hours now. A white background option would be nice.

Too much writing, too small print, can't see data as your working out. I wanted something to use when I fitness walk inside during the winter. Basically this does it but you can't see what you've done till you uploaded it to connect garmin.