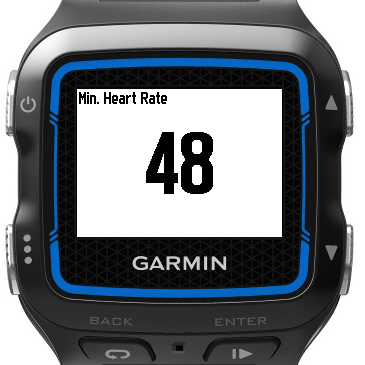 I love this data field on my Fenix 3. Please add support to Fenix 6X! Thanks!

This is a key part of my workouts from the first try. I only use it occasionally; but how often does one need to update resting HR anyhow? I run it overnight, in a meditative yoga class, or just meditating in a resting position. Not much use during a 'workout' because that's not the point. Knowing your resting HR is a vital part of accurately calculating reserve heart rate zones. I highly recommend this and other TeunMo apps.

It's a great idea that should be a standard Garmin feature. However, the data field does not show up on my Forerunner 230 even though Connect IQ indicates it is installed.

I loved it on my FR 630. Please make it compatible with fenix 5

Works as expected, without smallest problem.

I downloaded for FR230. Does not show up at all anywhere. Even as a data field, I tried lying down for a few minutes recording it as an "other" workout but once workout is saved no Resting Heart Rate Info can be found anywhere in the details

The problem I encountered is that the Edge 1000 doesn't detect movement, so will go to sleep. Touching the screen can often result in taking the device back to the data field selector. So it's difficult to get the minimum "at rest". However, I ultimately got it to record my (known) minimum by placing the device on my chest.

Thank you, a really simple to use, very useful app and really critical for good fitness monitoring. Recording resting pulse rate by any other means now seems such a chore. Now all I need is a nice app to help me stay in or below level 2 for low intensity blocks of training, with the aid of a few on screen prompts or bleeps that would make my training more effective.

Works well on my Edge 1000. I created a new profile, Heart, set it to one data field. After viewing my min heart rate, I power off the Edge and after powering it on again, I choose a different profile. In response to another review, yes, it does record heart rates below 48.

Does exactly what it's supposed to do on Edge 1000. Very helpful datafield.

Works as stated: it is a data field, storing you minimum heart rate during an "activity" (for instance, sleeping or resting, to be recorded without gps as "other"). The negative reviews are all from people who misunderstood this to be an app. Good positioning of the watch for best HR reading is essential for best results.

Works pretty well. Maybe you should put instruction link for data field into App Info, so people will be less likely to give negative rating because they don't know how to configure...

Like others I downloaded this onto my Fenix 3 HR running v6.90 but can't find the app.

Very useful. Thank you very much!

Works well. Is 48 the minimum? Can't get mine below yet know its possible because I've done it before.

I've downloaded and sync'd but i can't see the data field on my FR235, can you please advise how to make it visible/useable? I can't find anything in help

Great data field. Works well with any of my apps' or make up a new one. Use the max heart-rate field as well. I set up a app called "heartrate" shows min, max and current rate and elapsed time. Go to sleep and in the AM you have your data, save the activity and you have a night time of heart data.