This datafield helps to improve the veloviewer explorer score, see</p><p></p><p>https://blog.veloviewer.com/veloviewer-explorer-score-and-max-square/</p><p></p><p>The header shows: number of tiles visited for the first time, number of unique tiles visited during current activity and the tile coordinates (relative to the home tile)</p><p></p><p>Below, tiles surrounding the current location are shown. Red=never visited, Dark-green: visited in the past, Light-green: visited during current activity. In addition the recent track and a heading-direction indicator are displayed.</p> 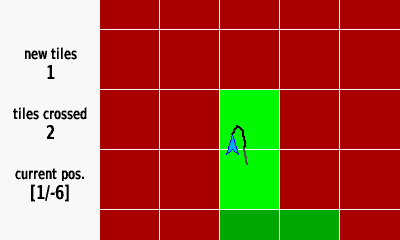 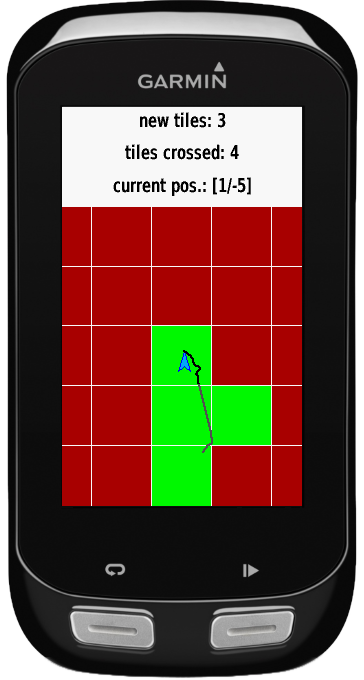 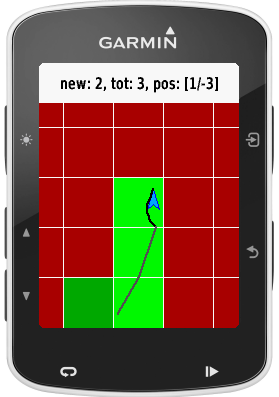 I understand that garmin has broken the app with the 256 character limit, but the app is now completely broken as I'm getting 'bad map string' error on setup, so it's storing no history at all now. :(

I had the same problem as named in the other reviews: only red tiles. It seemed the kml file didn’t fit. I’ve tried several times on my Macbook with the same disappointing result. Today I tried again on a Windows computer and now I can say it works well. So in my opinion the app only works with a Windows computer.

Pretty useless : I followed the procedure (http://www.shmo.de/EveryTile/setup.html) to generate a string, but it is too long according to Garmin Express. Which means all my squares are red. Actually, they all become red whenever I switch my Edge 520 on to go for a ride... Which is of no help for veloviewer tiles, and not much help for tracking tiles as a rule anyway. Sad, because despite a spartan interface (very much to my liking), it seems it might have been great to use it as a on field complement to track tiles. Maybe the app could load the string from a file deposited on the edge instead of as a string from the IQ interface ? Or even, work out directly from a .kml file as downloaded on Veloviewer ?

This app is really a great piece of software. Sadly it seems that Garmin does not allow to use strings longer than 256 chars in Garmin Express / Mobile now so it is not possible to set the map string anymore. Otherwise it works fine.

I installed EveryTile recently and used it to increase the number of tiles I earned on a 200k rando event by 23! The lack of a map background is kind of rustic and that the up is always North can be a bit disorienting. However, it doesn't require much savvy to master. Here's a helpful hint: The instructions on how to create a KML file are useful for creating a map string very close to home. It's better to install the VeloViewer Chrome browser extension - https://blog.veloviewer.com/veloviewer-chrome-extension-for-strava-website/. Then you can create a KML file for whatever area you have open in the map view

2 times the app gifs a green field, but in veloviewer its no hit. And when i stop and put my garmin on pause the fields reset and went al red.

The resetting on pause should be fixed with the newest update. But if the tiles went to red (and not light-green to dark-green), you were probably too far away from your home tile. As for the false positives: I haven't encountered any myself. But if there is some rounding issue, it could depend on where in the world you sit. I can try to look into the issue, if you send me the fit file for the activity and tell me which tile (I need the coordinates of some point inside) did get ticked by the app and not by veloviewer.

An updated review (sadly I needed to delete the old review as I could not edit/update). I now have the app working. Turns out that using Garmin Express was the problem (for some reason), and using the iOS app to instal the app and update the settings did the trick. Thanks to TomaszKorzec for the app and the support.

Works now perfectly on Edge 820 with Firmware 10.0. Thanks for the correction :-)

It works perfectly for Identifying the new tiles that I am going in to but I have never been able to generate the previous tiles that I have been in even following the how to page. I am using a Garmin edge 1000.

Hi Tomasz, Thank you for writing this great app! I found the same as the other two - it was not working with once the latest firmware had been pushed to my Edge 1030. HOWEVER - and this a big thank you to you for opening the source - if I recompile the app against the latest SDK (3.0.x) it DOES work for me (I re-uploaded a beta version of a new app called "RideEveryTile"). Would you be interested in regenerating the app against a new SDK? Alternatively should I try to publish the version I compiled? Thanks, Pete

Thanks for the hint! It turns out, the app did not ask for permissions to use GPS locations (in the manifest file). Previous firm-wares were not checking the permissions properly, but now they do. Please let me know if the current version still causes any troubles. cheers, Tomasz

Work great on edge 820 until firmare 9.10. Very usefull for tile hunting. On Firmware 10.0 there seams to be a bug in the firmware, leading to havig just displayed the map, but can see no movement at all and no route/trip. I think this is a bug in the firmware and not in the App - since downgrade to firmware 9.10 repairs this problem.

thanks for the review! It turns out, the bug was on my side. The app did not ask for permissions to use GPS locations. Former firmware versions ignored the lacking permissions, the newest ones are strict (as they should be). All should be good now.