2019 CIQ Developer of the Year</p><p>Always ***Free***</p><p>Dozen Walk is a data field display for walkers and hikers. Show Both Speed and Pace, Total Activity Steps</p><p>Click the "More" link to expand this description page.</p><p></p><p>INSTALL NOTES:</p><p>1.) If you update/install and you don't see the data field. Update or the install may require a restart of watch.</p><p>2.)Install instructions:</p> 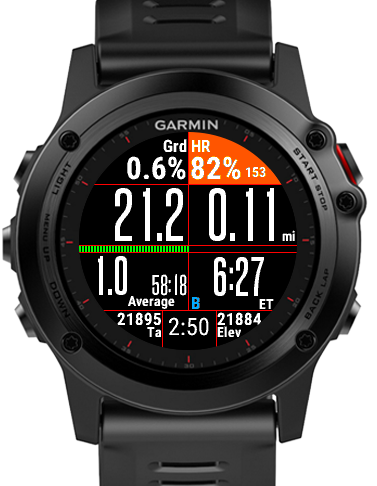 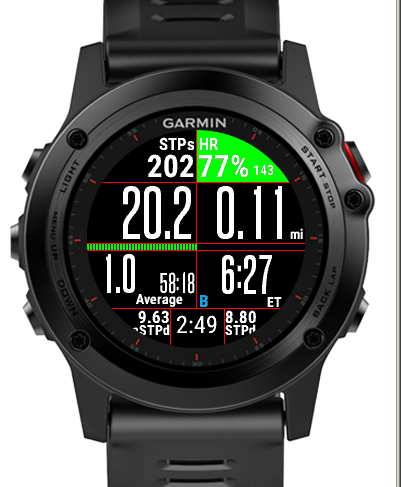 The best data field for hiking. One thing which I missing, please add % Grade. I don't see this option in menu, but in description is mentioned. FR645M

Hi, i have downloaded this 5 times now and synced. Nowhere to be found. On my FR235L under IQ apps it still only shows an earlier App (simple walk) Any ideas? Thanks

Paul, that is because DozenWalk is a datafield and will need to be added to the Builtin Walk or Run application. The FR 235 i believe does not have a walk app. I have 2 apps (full feature) that have walking support Run+ and OutdoorSports+. To add a datafield to a Garmin built in use the following. From the clock watch face, long press menu button (touchscreen long press screen) “ACTIVITY” is the builtin-in that is desired to be set.(Run, Bike, Row, SUP or Swim) In the main menu select: Settings, Activities &Apps, “ACTIVITY”, “Activity” Settings,Data Screens Select first Screen: then Set Layout to the entire screen Set Field 1 to .ConnectIQ Fields.DozenWalk Most watches are the same as described above, but there could be small differences. Please update this review, since Simple Walk is not my App. :) Thanks Brian.

Add foot pod support. When connected to a foot pod, and the foot pod is moved, only the distance field increases. The Steps field does not increase with foot pod movement.

thanks for the review, however steps generation is done by the watch not the FootPod. That is the Garmin design.

Hi, thanks for the work. How can I use it in a Garmin F235? I download it as app and screen but I dont know how to find it in the device. Thank you!

Thanks for the review From the clock watch face, long press menu button (touchscreen long press screen) “ACTIVITY” is the builtin-in that is desired to be set.(Run, Bike, Row, SUP or Swim) In the main menu select: Settings Activities &Apps “ACTIVITY” “Activity” Settings Data Screens Select first Screen: then Set Layout to the entire screen Set Field 1 to ConnectIQ Fields Dozen____ Most watches are the same as described above, but there could be small differences

Great! Thanks for all your hard work!

Thanks and keep walking!

I've been using DozenWalk on my old FR630 for about a year, and now, changing to FR645, I found that it was not compatible. Alas, when I wrote to the author a few days ago he responded very positively - and one day later he had fixed it (and taken the time to send me an e-mail as well!). I've now been on the FR645 for since April 16th, and, as always, it works perfectly. The DozenWalk should be on every walkers watch.

Vivoactive 3. How to install properly? So anxiousto have this. Installed as per your Install Notes. Yet cannot get the screen as shown here. Steps: Walk setting/Data Screens/Screen 1/Edit data fields/ Connect IQ/ Dozen Walk. Problem is (so it seems) that I'm not able to set the Layout to 1 Field. See the 4 selection fields 1 to 4, tick top one- it is saving but It just stays with 4. How to solve?

Thanks for the review, i have the VA3 and should be able to set the screen to a 1 field layout.

Displays almost everything you want to know when hiking one 1 screen. Nicely done! Well-arranged layout, I haven't noticed any extreme battery drain. Things I am missing (and I am not certain it's even possible to add): ascent rate (m/h), sunset time Thanks for a great piece of software!

Thanks for the review, this is a datafield so i can fit only so much into the limited memory. Check out my outdoorssports+ it provides more information.

this data field is very close to perfection. thumbs up also to the author, extremely responsive when asked for informations, improvements and the like.

Amazing work you have done on this. So much info in one screen! :) Works perfectly on vivoactive3 as far as I can tell.

This app is great. I rated it bad previously due to my stupidty, I didn't know there were changeable data fields on my vivoactive. Thanks for the clarity, that helped a great deal.

Thanks for the review and happy walking!

This data field is absolutely fantastic. Besides giving a lot of information in one screen, is able to give me the number of steps for walking activies and also display it correctly on Garmin connect online. Well Done!

Thanks for the review, and well stated! A new year, a new you, #beatlastyear.

This really improves on the very basic screens given in the default Walk application. Makes it so much more useful! Great job!

Thanks for reviewing to the DozenWalk. This is a data field not an application and needs to be added to a single data screen within the built in Walk application. a.) Goto settings,apps,walk,data screen,screen 1 b.)Set Layout to 1 Field c.) Set Field 1 to ConnectIQ Fields, DozenWalk

I walk all the time. By far my most common activity on my Garmin. This data field took the built in Walk application from acceptable to awesome! I especially love the steps built in and the HR all on one screen. If I could ask for anything else, it would be total steps (I'm often going for 10k for the day, or whatever my goal is, and it would be nice to see where I'm at to goal) Highly recommend!

Thanks for the review. Look for it in the next release as a screen option and will save the Activity Step Total to Connect App as an IQ data.

Thanks for the review. look for it in the next release.

Using a Fenix 5S, and I really love this data field. However, would it be possible to tweak the fonts slightly to accommodate 24H clock? As it is right now it overlaps the calorie/gradation data.

Thanks for the Review, I made a slight change to remove the overlapped text.

Fenix 5X here. How do I change the background color of the Data Field?