Sailing is a watch app for tracking sailing activities displaying speed in knots and heading direction. There is a specific 5 minutes race countdown and a timer starts at the end of this countdown.</p><p></p><p>If you like this app, please consider buying me a coffee : paypal.me/dmrrlc</p><p></p><p>Features</p><p>- 5 min race start timer sequence</p><p>- GPS activity tracking</p><p>- Current speed (knt)</p> 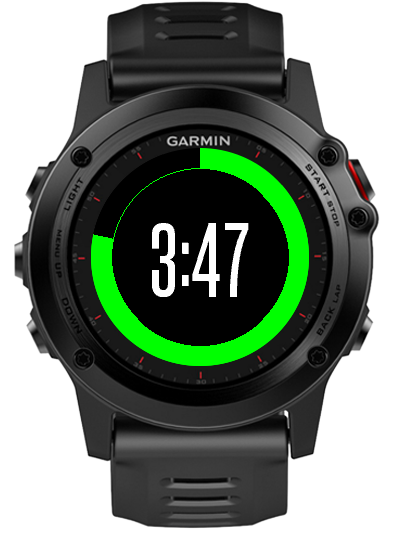 If have got a Fenix 5x, The funktios are great only the screen is a mess. All the data shows trough eachother

After the last update it seems to work fine. (i didn't try it when sailing. Only remark that i have is the count down circel runs count clickwise. Is this for a special reason? Normaly i would do it clockwise. What also be nice if the watch also fibrates on every minute and last 10 sec of the countdownfunktion.

Thank you for your input. The reason why it's running counter clockwise is because it's a countdown timer. Seemed logic to me that the bar is 75% full with Xm 45s. For the vibration, I will add it to the next version.

The app looks great, just what i want as a dinghy sailor. But is crashes everytime i start the app. I have got a Fenix 3, and when its start it searches for GPS and after ca 15 sec i get the IO screen. Do i something wrong? Can anyboddy help me. I have installed the newest firmware on my watch.

Could you please try with the latest version from today ? I found an issue on older watches (software version before 3.0) that was not allowing the activity type "Sailing" so I fixed it in the code. Please reappreciate you review if it works

Does NOT work. Even doesn't start.

On which device did you try?

Thank you for your 1 star review. It gives me a lot of motivation for developing this app for free. You can press 2 seconts on the exit button to stop the app. I will test it on the Fenix 5 Plus emulator and fix it if needed but I only have an old Fenix 3 for testing

Great app. It would be nice if the stop button was only activate on the side of my Vivoactive, not on touchscreen display. May be colour tracking for speed on map too.

This app crashes every time I use it, I have tried re-downloading the app and restarting the watch and no luck. Is there anything I can do?

I installed the app on a 735XT. When we press the start button, the timer is running but is not displayed. Is there a special setting to do or an update ?

The last 10 seconds countdown has no vibration prompt

Thank you for the feedback. Feel free to add vibration to the countdown. https://github.com/dmrrlc/connectiq-sailing

Really useful app. Only just figured out how to use the countdown, but the speed and heading tracking during the race is great!

You habe to press on the "menu" button (2 seconds I guess) of your watch to start the countdown. Please try again and update your review if it works ;-)

Whenever i start the countdown, after about 20 seconds "IQ!" appears on the screen and stays there. The app is virtually useless for racibg until this is fixed... vivoactiveHR

Not compatible with fenix 5. Knots and race time overlap making the display unreadable

Please try the current version and update your review if you like it. It is now compatible with Fenix 5

It's great that from the countdown timer it goes directly into the knots. HOWEVER... I would love to options for a 5, 4, 3, 2 or a 1 minute timer start. As it is, you have to start the timer and then adjust the countdown minutes as it counting down. it doesn't pause. It's not possible to just start with a 2 minute start with out first starting with 5 minutes and then pressing the down button as it's counting down.

Just downloaded it to day but it won't run - does this app need to be connected to my phone to run? After 5 minute countdown watch face displays 'IQ!' If app can't run offline then it's a big disadvantage for those of us who want to engage in activities phone-free...

I like the functionality off the app but on my fenix 5, the speed and timer readouts overlap and are very close to the top of the screen making them unreadable. When this issue is resolved, it will be a great app.

when starting the application by using the Start-Button in the Menu of Applications it shows the Name "67GA2153" instead of "Sailing". Is it possible to fix this?

Hi Dragonfly, Thanks for reporting this issue. It's now fixed. Regards,Luc

can you customise an app to use for off-shore.

What do you mean with off-shore? Wich functionality would you need?

Your idea is pretty good but digits must be bigger in order to be seen during the activity. One better layout may be one with heading in degrees and speed in knots with maximum dimension allowed. In a second screen, speed may be shown in the form of medium, current and max. Thanks

Hi Diego, Speed is already in knots and heading in degrees as well. I will try to make the speed digits bigger in a next release. Regards, Luc