Large font watchface!!! Display time, heartrate, steps, floors, sunset/sunrise, elevation, date and other information in easy to read numbers. Plus customize the display colors. See https://www.dsapptech.com/megatime.html for more details.</p><p>Foreground and background colors of all fields may be adjusted. Set them to your favorite team colors! Many app attributes may be customized using Garmin Connect IQ Mobile app.</p> 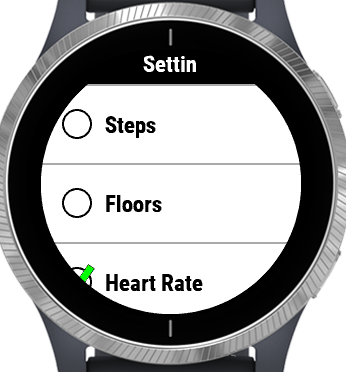 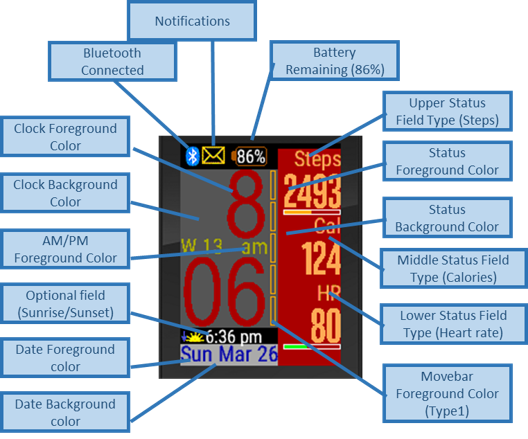 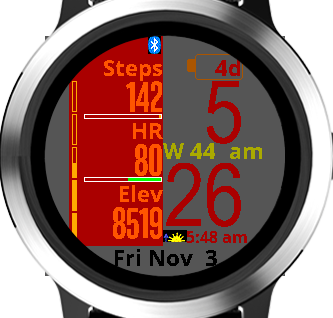 I added the field - it's crowded!

Unique, with calories of activity. only the calories that result from exercise.The one that shows this information Perfect, I can only say that. Thank you

Only problem I have is the HR is way out in fact it stays on 90. Even though it's 56

Is it consistently off? The face updates once a minute and won't change until then.

Good to hear, thanks for the feedback. Please let me know if you have any other problems or suggestions.

Distance field is not working in vivoactive HR. Sunset does not change to sunrise at night. It's always sunset. regards.

My apologies, latest version should fix that

Distance field is not working in vivoactive HR. regards.

Distance field is not working. Stay always on zero. Other is very good.

My apologies, fixed in latest version

I think you are asking for a sleep logo. Could you describe what you want in a bit more detail?

The absolute best watchface for the Vivoactive HR!! Easy to customize with colors/data and the layout has everything I need. Big numbers makes it easy to see without glasses. Great work!

Littlesol, how can you rate an app with only 3 stars if you don't know how to use it! All watch faces must be configured via phone app (Garmin Connect Mobile). You choose your garmin device and then Connect IQ Apps, and then select the watch face that you want to personalize.

Good suggestion. Could you specify which format you would prefer? i.e. Day, Mon, Yr

I have been waiting for this watch face! Perfect design A+

Thanks! Tell your friends :)

The best coder in Garmin connect IQ. All solicitations are rapidly attended!

The best coder in Garmin connect IQ. All solicitations are rapidly attended!

Looks great and perfect for everything i want on one watch face screen without having to scroll up or down with my finger. However, the HR doesn't change accordingly to the HR wrist monitor. It takes about 4-5 mins to change to the correct HR reading. Please fix?

Thanks. I will look into the HR.

It won't stay on my watch. It goes back to the one that came with the watch and I don't even have that one anymore I deleted it. Anyone else got this going on?

I have not had this problem at all on v0.1.07. Send me your E:GARMINAPPSCIQ_LOG.txt and I'll look into it.

Great watchface, everything I need with a clean design. Love it

One of the best watchfaces. I would be perfect if you could add the movebar at the bottom. Thanks a lot ;)

Thanks. Latest version has a movebar.

Awesome watchface!! Simple and easy to customize and layout is perfect. Keep up the great work.