ePwr +Grade</p><p>Is an accurate cycling estimated power for all device types. This is the same power calculation that is used in the DozenCycle (CIQ 2.0+ devices), but packaged as a simple data field. This is a companion datafield for DozenCycle and watches with IQ version 1.3/1.4.</p><p>Click the "More" link to expand this description page.</p><p></p><p>Provides 3 Custom IQ Graphs and 3 IQ session data</p> 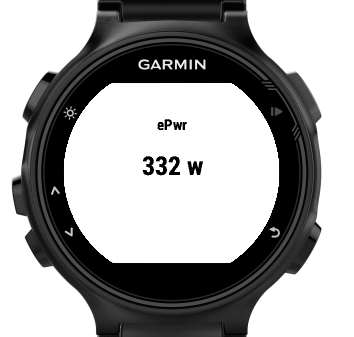 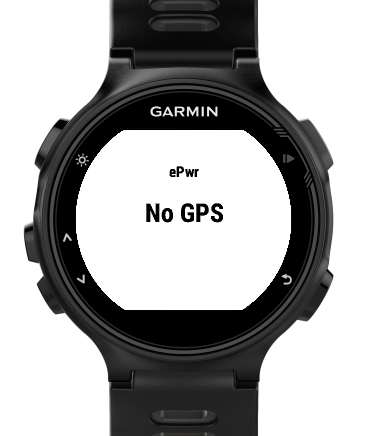 Just one question, as I couldn't find any information about this: What type power is displayed exactly? It is not raw power, that's for certain because of the lag. But is it 3 sec, 5 sec, 10 sec (...) average power it displays? It would simply be nice to know because not knowing what exactly you're seeing is a little, well, counterproductive.

Very good!!! But last time the value for average power is missing.... What can I do? Thanks

To use the power-calculation in a data field is a very lean possibility. The calculated datas are quiet realistic. I love to use it, thanks!

I received your email but you did not leave a reply email. Remove the data field from the bike app and then it will uninstall. The installing is a Garmin Connect issue not an CIQ issue.

Decent looking app but the data is unusable small on the Edge 130. Can't the text scale?

The application works well on Forerunner 235. Its possible to add the average power of 3s? I think its more important.

Its a fantastic app ! However is it possible to make the numbers larger ? its really tiny on an edge 130

I have installed the app in both my Vivoactive 3 and Edge 530. It works fine in both except for one detail: in the Edge 530 the size of the numbers is too small to see while driving. Can you help me?

Congrats for the app, it is very useful. In my opinion an average window of 20 or more seconds (programmable by user) could be more effective to avoid erratic data. My epower and grade graphs are hill and down even if I cycle still and flat. It could be great to have a "power average lap" and "grade average lap" field too, and a full screen version with more customizable fields (like dozen cycle). Thank you in advance!

after few email with the developer, he solved some bugs and made the app perfect! it shows ftp. grade of the road and actual power based on some parameters so no need of a power meter

The only positive note is that the app doesn’t count watt on a descent so values are more accurate. Otherwise, gradient graph doesn’t show negative values on the connect app and the estimated ftp doesn’t work at all! I always have about 5 watt after a ride..also, I often have high max watt peaks on the statistics but the graph shows don’t show them

I would love to see 3s and 5s avg power estimates

It works in my fenix 5x, I can see the average power data and grafic and max power data, but there is a problem with MAX ftp. for example, in one activity of 2 hours I have an 260 power average, but in Max FTP apears only 24,82 watts???. I have cadence and velocity sensors. I don't know if I have anything wrong in my configuration. On the other hand It would be possible to have an option to calculate the power for 3s / 5s to avoid erratic data??? Thanks and good job!!!!!!!!

I am sorry but it doesn’t work with a vivoactive 3 or i haven’t found the right way to use it ? Could you help me please? Thks

Thanks for reviewing, if you do not have a cadence sensor set Always Calculate Power to On.

Hello. I use a edge 820 to go to work, if I pause and turn off the ciclocomputer, when I restart after 3-4 hours, I wait for the GPS signal, but I have an error until restarting a new workout. If i use in continuos, this is a great app.

Hello, I am installing the application and it does not work. First field I have the Dozen of Cycles and the second field I have established 4, with epower, FC, Speed ​​and FC Zone. My question is, does the Epower application work with a cadence sensor or only with the gps? Thank you

thanks for the review, If you do not have a cadence sensor, check the 'Calculate Power Always.

Hello. I think it's a very interesting application. I see the maximum power information and the power and grade graphs. I can't see the average power data. I have a cadence sensor but it indicates power without giving pedals. Finally, is it possible to use garmin the power data for the VO2 calculation? Thanks

thanks for the review, there is a setting in configuration that stops power when not pedaling.

Enjoying this, thanks. I maybe missing it but can't seem to get average power in garmin connect?

Thanks for the review. Check in the IQ stats section.

thanks fro the review, Soon this datafield will be updated to the power that is in DozenCycle.

e-Power is the best app, thank you ......... but in the flat it shows too little performance, is the correct? Thanks in advance.

Thanks for the review, I'm looking into different calculations for estimated power.

nice update about cadence but estimated power is still very low on flat maybe you should compare the formula with de omnifield https://www.gribble.org/cycling/power_v_speed.html

Thanks for the information, i will look into this approach.

Previously rated 5 stars but now I only get a zero reading and an empty curve because I don't have a cadence sensor. Same with the competing apps so I guess I'm left with nothing. Ironically since I ride fixed gear I can't stop pedaling no matter what. ::

Sorry i will make that an option to select!