Introducing Egg Timer, a simple app for Vivoactive and Vivoactive HR that displays a user-entered countdown timer and the current time. This is available for many other Garmin watches as well, although some of them now do include a built-in timer app.</p><p></p><p>Now, with the new "Timer continues when exiting app" setting enabled (disabled by default), Egg Timer continues to countdown a running timer after the app is exited. Egg Timer does not run in the background; rather, it calculates the elapsed time from when the app was exited and then reopened to add this functionality. This setting will not take affect if the timer was paused by the user before exiting the app.</p> 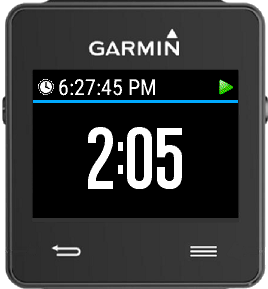 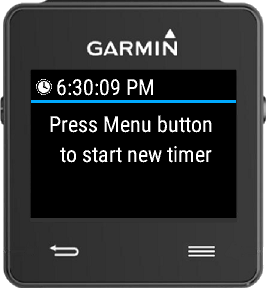 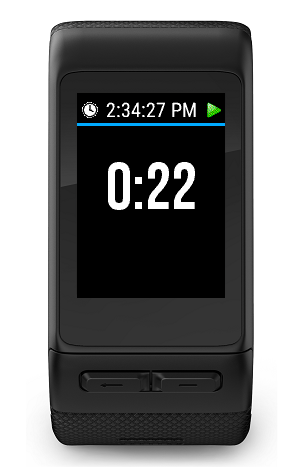 Hello, We plan on posting an updated version of the app soon with support for fenix 6S and many more devices.

Simple, but exactly what I need. I have tried many timer apps but nothing allowed a simple recurring countdown timer. Some subtle tweeks would be nice - a shorter buzzer at end. Still, it's my go to.

Great application: very simple but just what is needed :)

vivoactive 3 music once you set the time it starts and once it ends and you press the button to stop the timer it restarts again .If swiped off to watchface timer pauses. no reset.

Hi Steve, Thanks for the review. Just to clarify, are you hoping that when you exit the Egg Timer app, the timer resets? If not, I'll just note that the current behavior is for the timer to pause when existing, or, in the Garmin Connect or Connect IQ apps, you can toggle an Egg Timer app setting labeled "Timer continues when existing app" which will keep counting down the timer while you're out of the app. Please email [email protected] and we can try to assist in more detail as to any requests you might have. Brandon @ Pedlar Studios

Best thing is it's an app and stays active, doesn't go back to the watch face like widgets and native timer

Couldn’t exit the app. Had to restart my vivoactive 3 to get out and uninstall.

Hi Robyn, You should be able to exit the app by swiping left to right (same as all other apps). Thanks, Brandon @ Pedlar Studios

Easier access the VA3 timer! Any considerations to saving settings for multiple timer values? Thanks!

Maybe makes sense for devices that don't come with the stock timer app. No benefits over the stock timer on fenix 5x otherwise. No alert when this timer app is put into background. The timer only sounds when the app is reactivated again. So what's the point.

Hi Alex, Thanks for the review. Yes, this is much more useful for the numerous Garmin devices that do not or did not come with a stock timer app. I do have future plans for multiple timer support, as well as allowing the app to alert while in the background when the timer finishes, though this will only be possible on newer devices.

Great application, I use it every day at work my entire shift. Could you add the ability to control vibration? I only want it to vibrate once when the timer is done, not when I restart the timer. Just trying to limit unnecessary vibrations for battery life. Thank you!

Hi spenceds, thanks for the review! Having settings to control vibration is a good idea. I have added it to the to-do list for the next version of the app.

The app in French version is OK, thank you. But on fenix 3 hr the name of the app on the watch is unreadable (succession of numbers and letters)

Hi Jacques, Thank you for your note! I have pushed another version (1.22) that tries to resolve this, but I think it may be a Garmin bug based on what I read here (https://forums.garmin.com/forum/into-sports/cycling/edge-1030-aa/1265806-strava-app-name). Please try out the update and let me know if it resolves it. My watch cannot change to French for some reason unfortunately. Thanks

For those with battery drain issues, disable GPS in watch settings. GPS will continue to work for apps such as Running, but won't be triggered by Egg Time. It is caused by Garmin's latest update.

Very useful and easy to use.

restarts vivoactive (takes a while) every time I exit it!

Works good, as expected, but battery drain. The reason is, that GPS is activated when startet. Why? And GPS is not deactivated when App stops.

I made the experience that using the timer (set to 20 minutes, but being in the application after the time stopped for another 30 minutes) my battery was drained by 8%. The whole morning (before that) my battery went down by only 1%. I believe this is somehow related to this application. Anybody else had that experience?

Works as it should. An idea (for me, at least) would be to have presets for hard boiled etc - just for ease of use. And GREAT of you to share the source, I hope more devs will do that, it's always good to learn from others!

Works OK, but there is opportunity for improvement: 1. Timer pauses if you press back and then re-launch the timer app. Could the app be made to continue counting while not open? Perhaps by reading the actual time of day when closing the app and reopening, and subtracting the difference off the time remaining. Obviously the alarm wouldn't go off while the app was closed, but this would be useful for longer timers. 2. Battery usage seems high - I lost as much battery during a 2 hour timer as I did in the previous 2 days of "normal" smart watch use (notifications turned on but no GPS use). For longer timers I will probably default to setting a normal system alarm to limit battery drain. Adding the feature described above (1) would allow a work around to limit battery drain by quitting the app.

Good vibrations. Now it is much better.

Good app but reboots my Vivoactive.

This is a gerat timer but the vibration is so weak that I don't feel it at all.