UV-Index is a simple widget that displays the current UV-Index and it's daily maximum for any location. The widget makes use of GPS coordinates and retrieves the UV-Index using a web service provided by OpenUV Project (https://www.openuv.io). This API provides a convenient way to get the UV-Index including relevant corrections for ozone, cloud coverage and accurate altitude data.</p><p>.</p><p></p>

v1.2.3 Support for Venu and Vívoactive® 4 added</p><p>----</p><p>You can now check the UV-Index BEFORE you go outdoors. The position from your last outdoor activity with GPS is used to retrieve the UV-Index. To update position press START button (this invokes GPS). This is now the new default behaviour, to revert to old behaviour go to app settings and uncheck "Use last known position". Enjoy using UV-Index indoors! 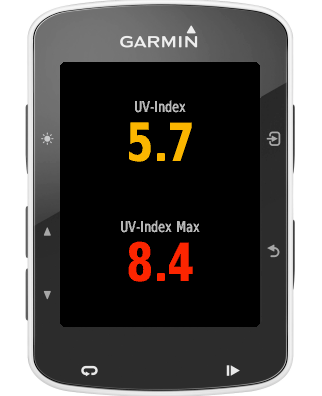 Nice app. The main think I'd add is to use last known position.

Thanks for your feedback. The ozone layer thichness is used by the app to calculate the UVI. It’s a major factor for the UVI and can cause changes by more than 20% from day to day with same weather and same location. However, this value has nothing to do with the ozon value measured at the eath surface In contrast to the ozon layer thickness I do not have high quality global data for ground level ozon.

Awesome app, and useful too!

Really useful! Only improvement would be some way of using the phone location or some way of speeding it up. Is the exact GPS location all that important? Like if it was retrieved in the last week use that?

Thanks for your feedback. Location changes do matter and without getting your current position the widget doesn't know if it's the same as last week :) I'll think about options to make the widget faster while keeping its simplicity. Thanks again!

Works nicely. But would be much more useful as a data field.

Agree with another review that says forever retrieving UV index but never shows data. Not very helpful to just say 'need a GPS fix' without providing any additional information on how to do that. Vivoactive3

I have uploaded a new version with improved start-up and error messages to make it more transparent that you need to wait for GPS until UV-data are read/calculated. As of now, there is no caching - so you need to go outdoors.

You need a GPS fix to get rid of this message

Was working fine on my Vivoactive HR but now doesn't work. Uninstalling...

Please contact me directly with more details. Which firmware version do you use?

Installed on 6/20/17 and made sure my watch was up to date and the widget would not work on my vivoactive HR.

I have positive feedback from several users who are using my widget on a daily basis on a vivoactive HR device . Please contact me directly and I'm sure we'll sort out your issues.

Very good idea for aoo. Works great on Fenix 5. If I may suggest - it would be useful to show measurement on the colorful scale (green, yellow, orange, red...) - to make it easier to interprete (using scale described here https://en.wikipedia.org/wiki/Ultraviolet_index)

The widget has settings (use Smartphone app or Garmin Express). There you can enable colors for the values as per UVI scale. Thanks for your feeback!

Simple, yet useful widget showing the current UV-Index and the maximum UV-Index for the current location. Although it takes some seconds for the widget to get the GPS fix and read the additionally needed information from the Web, it is much faster than starting an app on the phone ... I like it!