Runner is built on the success of Hiker but is focused on running or trail running. Activity is recorded as a run within Garmin Connect. </p><p></p><p>There is either one 6 field screen or two 3 field screens. These can be: time, timer, distance, pace, lap timer, lap distance, lap pace, heart rate, compass heading, altitude and ascent. </p><p></p><p>There are three graphs showing heart rate, elevation and pace. These show the data for the last two hours. The data is updated every minute. Below each graph are additional metrics. </p> 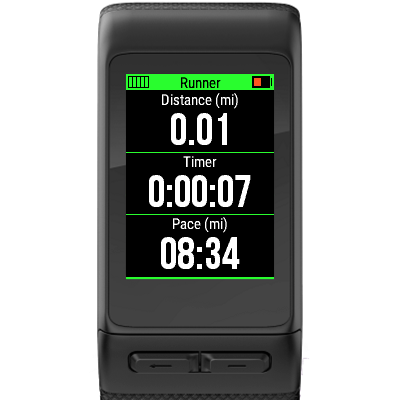 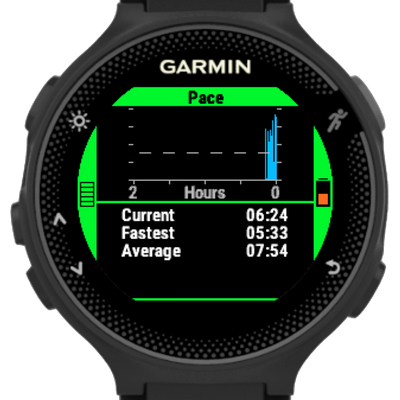 Love the app but it stopped on me in the middle of a run. After the run I was able to sync all the data successfully so it does seem to be the App. Hope you can fix problem.

Love the app, it is my primary weapon of choice. About 2 weeks ago, it suddenly stopped working correctly. I can pull the app up, but when I hit the right side button (I'm on Vivoactive HR) the timer doesn't start. The first time it worked after three or four start attempts. Since then, I haven't been able to get the timer to start at all. Right side button works on all other uses, all other apps. Seems very odd, and maybe it's just a fluke. I'm going to try uninstall/reinstall, but thought I'd put it out there in case something was up. I have not recently updated the Vivo itself, so nothing changed there. As I said, every other aspect works with that button, so I don't think it's the button. Weird...

Can heart rate zone be added as an optional field? This will allow targeted heart zone training.

For me it is the best app for trail running I have all the infos and graphs I want (at least on my forerunner 235 which is too limited in built-in activities settings). Even the ascent calculation seems to me better than the garmin connect auto correction on some steep paths... Great job, thanks a lot !

I'm a keen hiker, trail runner and road runner. This app (and the hike app) are great! I would use this exclusively as my only data field - if cadence was added as a field (steps is there, but no cadence...a really essential running metric). Great job though. A triumph!

Cadence has now been added as a data field. You can select it through the app settings.

Hi, very nice app. Could you please also the temperature data field as on the Hiker app? Thanks. Good job.

A good app with some great features, however, I would like to see a 6-field main screen so runners do not have to keep flicking through additional screens during a run. The other 6-Field Data Field in ConnectIQ demonstrates how it can be done using large enough fonts and with a plethora of configuration options. I would also remove the title bar just to save some screen space as I do not need to see the title "Runner". While the battery and GPS indicators are nice, they are not of much help once I have started a run (which is different to Hikers). In the Garmin Run app on the Vivoactive, I can press the "Back" button to go back to my watch face and return to the app by pressing the back button a second time. This trick allows me to see additional info (such as time of day) without needing to do any screen touching with wet fingers on Vivoactive. I still hope this app can become a viable alternative to the Garmin Run app.

Hi Lu. Thanks for the feedback. I've now introduced an option for 6 data fields on one screen. Within the settings remove the tick from Show Page 2. The option of jumping back to the watch face isn't possible within custom apps, so if you do want to see the time you will have to use one of the data fields.

better than the official build-in running app! thanks for developing this app!

Speed is essential for a runner. What is the use of all without current and average speed? Don't waste time on this app. Go for Hike 2, it's awesome. U get better features. Had high hopes on this app. Disappointed!

Thanks for the feedback and I'm sorry you're disappointed. Let me explain the reasoning behind the app and pick up on your points raised. I have used pace to track your speed as this seems to be more commonly used than speed itself. Pace is simply how many minutes it will take to run a km or mile rather than how many km or miles you can cover in an hour. Within the app you have data fields for your actual pace and your average pace per lap. The pace graph tracks your pace over your run with additional metrics for fastest and overall average. With regards to using a hiking app instead of this one, hiking apps have quite a lot of detail on screen which is near impossible to read when running. They are designed for walking. I've intentionally kept the two main data screens large to enable them to be read while running. The graphs and trail plotted allow you to review the run when you pause for a rest or at the end.