If you have problems, please use contact developer before leaving a review and make sure you have updated to the latest version! </p><p>This widget will download the current radar image from AerisWeather and display it on the screen based on the device’s position. It requires a connection to your phone and is dependent on a connection to the internet and being able to get a GPS location. It is best to run while outside. </p>

Registration instructions: https://ciq.sabeard.net/wrw4/subscribe.php</p><p>App info and FAQ: https://ciq.sabeard.net/wrw4/</p><p></p><p>4.18 - Added support for new devices.</p><p>4.17 - Fix issue causing black image download on Venu devices. New feature on watches to save and use a previous location. If using a saved location, you can manually refresh to your current position.</p><p>4.16 - Fix for another cause of crashes after saving the registration email with the ConnectIQ app.</p> 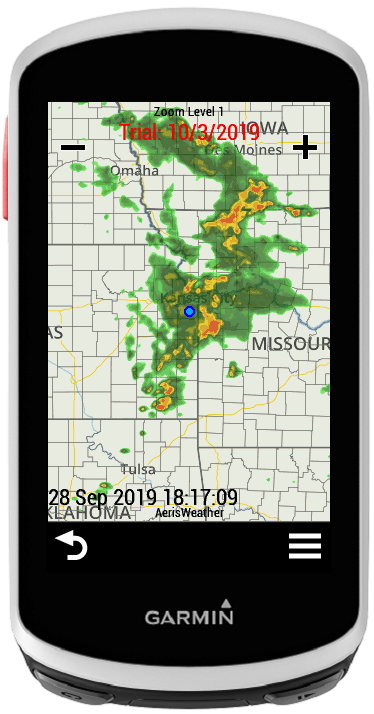 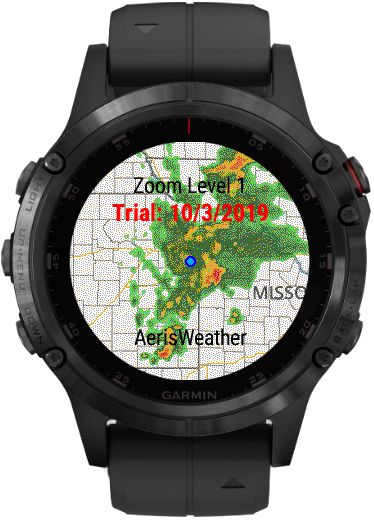 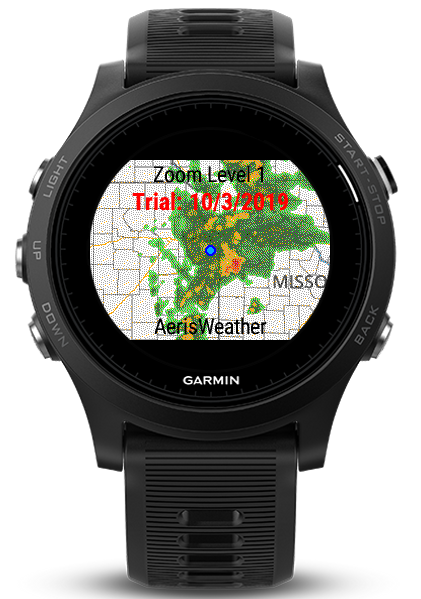 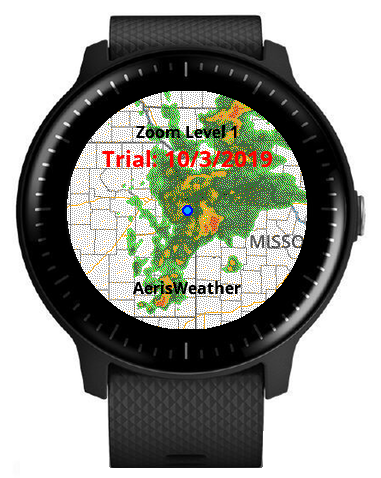 After using this app over the years, I'm happy with the latest update(s) and the new subscription plan. Makes it much easier to use the radar and well worth the subscription.

Is working. Would be good to additionally set a lat/Lon and store the last location as long as there is no new one available.

it's doesn't work on my epix : IQ! i'm in the south of france. is it the explaination ?

Than you for the help troubleshooting. The reason for the crash is solved in version 4.9.

Great work on this widget! Excellent use of the platform and a really cool thing to have on the wrist. Well worth $3 / year.

Great widget! Definitely would love to see an animation in a future version.

I have a working prototype, but have a few more bugs to sort out. The current plan is for devices with enough memory (music watches, and Edge devices), you can see 3 images in a loop. The loop will be images for the prior 30 minutes, 15 minutes, and current.

Great program. real nice to see where the rain is.

Setup takes a little work, but so worth it. This is a great addition to the watch to get weather radar and that is important to keeping the phone packed during MTB rides or just times I'd rather keep the phone in the pocket. Nicely done. One request - possible to get 3~5 images loaded to show animation? That can be important to see the weather trajectory.

I plan to investigate the possibility to download multiple images. If it is possible, it will only be available on music enabled watches and the bike computers due to memory limits.

Worth noting, that the activation must be done in the other garmin app. Besides that, great!

Fantastic widget, extremely useful and well-supported. Works best with devices with lots of memory, but still is functionally complete in these devices. I never leave the house without consulting this widget!

More often than not I get an error code on my remix 5x. Can't see myself paying for this widget if it needs my phone connection to operate. I'll simply use bom app on phone as it doesn't crash.

The app does require a phone connection in order to download the radar image from the internet. I will be happy to troubleshoot the error code if you use the contact developer link.

It works but it crashes a lot on Forerunner 245. I usually have to try multiple times before it works which can be annoying cuz it takes a little while to download the map but I use it a lot.

I am working on a few other reported crashes. please use the contact developer link I would be happy to see if the FR245 is experiencing one of those.

Cool Idea but something takes several minutes to load. Has to be connected to your phone and sometimes it works and most of the time it doesn’t. Poor execution.

HOW TO REACTIVATE YOUR AERIS ACCOUNT. This is the most confusing shortcoming of the app. No clear explanation of what "reactivate your key" means. While, I still may not know how to re-register existing keys (the SECRET id Aeris gives you when creating a demo app), you can delete the delete the demo app and create another one to generate a new SECRET key. 1) Log in to AerisWeather.com 2) Click Apps 3) Scroll to the bottom. You will see a demo app with your ID, SECRET, and NAMESPACE codes. 4) Delete the demo project. 5) On same page, click NEW APPLICATION button. 6) Give it a name, but enter * as the namespace. 7) A new demo project is created along with a new SECRET id. 8) In Garmin Express, edit the IQ app and paste the the SECRET id. Mine worked immediately after these steps. If the author has another way of activating existing SECRET id's, please post! That would save having to re-enter the SECRET ids on all your devices.

Starting with version 4.0 it is no longer required to enter or manage app id and secret keys any longer. After your 21 day trial is up you do have to register for $3USD per year. After registration all you have to do is enter your email address in the settings to unlock the app. Once unlocked it will work until the registration expires in a year.

Absolutely not working . It only downloads the map with the current location and not showing any kind of weather forecast or radar images. Don’t waste your time

Please be sure you are in one of the Aeris Weather radar coverage areas if using radar. AerisWeather has radar coverage only in US, Puerto Rico, Guam, Canada, Australia, South Korea, UK, Ireland, Northern France, Belgium, the Netherlands, Germany, Switzerland, and Luxembourg. If not in one of those areas there is global coverage for infrared satellite images in both B/W and color.

I've been a long time user of ths widget and love it. I am more than happy with the Developer's decision to charge for this app and remove the need to renew the Aeris API key every two months. The cost is so low it is negligible and it makes my life easier. The map and layers load quicker than ever and it is easily customised to my liking. Recommended.

I don't blame the developer for turning this into a paid app. What really surprised me was that the developer found a way to reward those who successful installed the API key for the old version. That was going above and beyond.

After payment and registering my email adres I only got IQ! on my screen and no widget. Fenix 5x plus.

I was able to recreate the issue on my watch. The easiest way to restore everything is to uninstall and reinstall the widget and enter the email address again. Make sure there are no extra spaces at the end of the string as that appears to cause the crash. Once the settings are corrupted, a reinstall appears to be the only fix.

Very frustrating, downloaded on my Phoenix 5X with multiple error codes after installation. Most common being error code 0, hopefully there is an FAQ page in the works

With the updated version of the app, I have also created a web page dedicated to a few FAQ and to explain some of the new functionality. It is linked in the app description.

The API keys are no longer required with the latest version of the widget.

That error code usually means that you developer subscription has expired and needs renewed.

Worst app ever. It keeps crashing. I did everything ID and secret key, each time you try to load it shows error 402. After a couple of tries, it reboots my Fenix3. Definitely not worth it.

Thank you for the review. I have been able to find the source of this issue affecting the F3 family of devices. The fix has been implemented in Version 3.15.