GARMIN WARNING: This widget is intended only as a flight planning aid and is NOT for in-flight use and should NOT be used as a primary information source.</p><p></p><p>The METAR/TAF widget is based *heavily* on Garmin's built-in widget (for the D2™ watch series) but with some improvements (and some drawbacks) and is designed to compliment the existing widget rather than replace it (at least on the D2 Bravo/Charlie).</p> 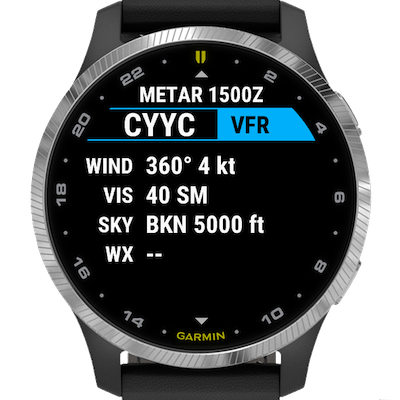 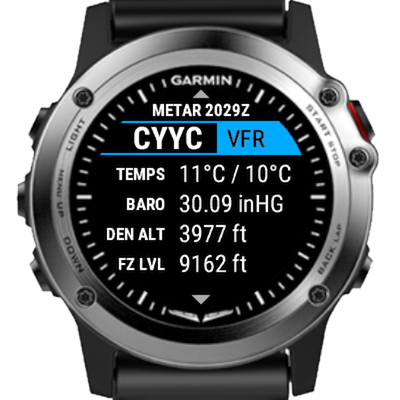 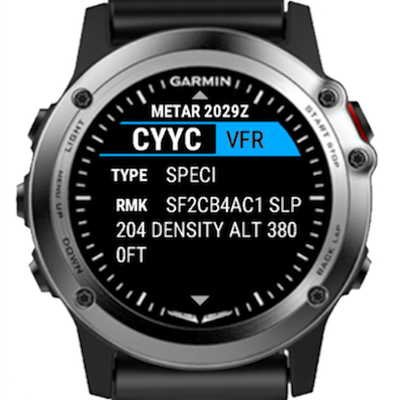 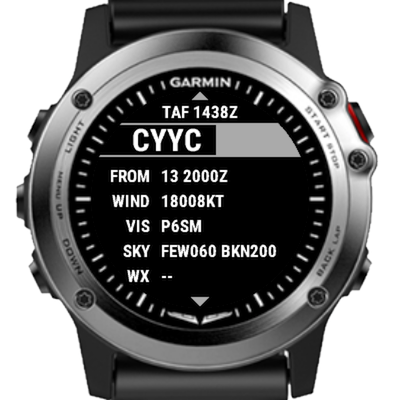 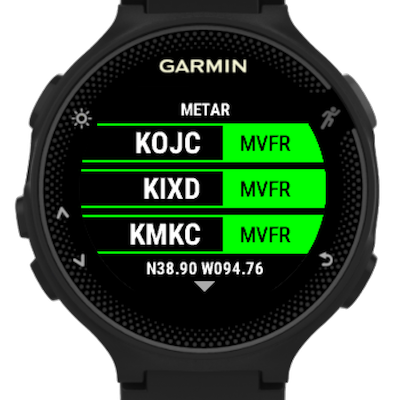 Thanks Douglas for working with me to make it work on my Epix.

Love this app. Gets my vivoactive hr one step closer to a d2

Works great but how do I get it to read Fahrenheit instead of Celsius? Everything else works great.

After last Update (today) it doesn't work, shows only IQ! Sorry, but don't offer it for Forerunner HR if it's not work with it.

Hi there. Sorry you have encountered an issue using the widget. The app is confirmed to work on all the listed devices so please use the 'Contact Developer' link to send me more information so I can try and figure out why you are seeing the error screen. Also, since the update was actually an automatic update pushed out by Garmin (due to the release of the D2 Charlie watch), can you please try uninstalling the widget, restarting the watch and then re-installing the widget?

Well- it is stuck on "initializing waiting for BLE connection -waiting for position fix" Doesn't work on 935. I don't see a 'contact developer button above' I'm paired with my phone.

Hi there. If you see "waiting for position fix" then the "BLE connection" line will be crossed out, and the widget is indeed waiting while your watch is trying to get GPS fix. Are you trying to use the widget indoors? Please try to run the widget for the first time outside or near a window, where you might get a better GPS signal.

Awesome! So easy to use! Love it! Use it everyday! Get it!

Great widget. Unfortunately does not find my closest airport 3 miles away.

Hi there and thanks for the feedback. Please use the 'Contact Developer' link to send me more details on where you are located and what airport isn't being found. The source for the METAR and TAF data should be complete for all ICAO reporting stations so if one is missing then I'd like to know about it.

It works with Vivoactive HR only, if the settings not be changed. ASAP after changes of settings, it shows only IQ!

Hi there. Sorry you ran into the IQ! issue. I'm pretty sure that this is related to the GCM update issue that others have also encountered. Please use the 'Contact Developer' link so I can get further details. Otherwise, it is practically impossible for me to try and track down what might be the problem as I do not have access to an actual vivoactive HR device.

Great Widget. But on Epix it shows only IQ.

Hi there. I believe this is an issue with the SDK and/or compiler which Garmin reports will be fixed in the next release. However, in the mean time if you can use the "Contact Developer" link then I can try and confirm this as I do not have access to an Epix device.

No works on fenix 5 no way find aerodrome. so no tar or metar! waiting and waiting for position!

Hi there. I own and use a fenix 5 so I can personally confirm that the widget does work (on both the fenix 5 and the D2 Bravo). If the widget is waiting for a position then that means it is trying to retrieve a GPS fix. Please ensure that your watch is paired to a mobile device and that you are in a good place where the watch is able to receive GPS signals (outdoors is best). Feel free to use the Contact Developer link if you continue to have problems.

Crashes and reboots fenix3. I'm running the latest firmware (8.20). Tried many different aerodromes, different settings and both with and without Bluetooth on. Log file doesn't have much except errnum: 0x002 in ERR_LOG.TXT.

Hola. Sentimos que estés teniendo problemas. Si funcionaba, pero ahora no lo es, eso suena como un problema específico de su reloj, ya que hay muchos otros usuarios de F3. ¿Podrías usar el enlace "Contactar con el desarrollador / Contact Developer“ para ponerte en contacto conmigo para obtener más detalles y sugerencias para intentarlo? --- Hi there. Sorry that you are having issues. If it was working but now isn’t, that sounds like a problem specific to only your watch as there are lots of other F3 users. Could you please use the ‘Contact Developer’ link to contact me so I can get more details and give you some suggestions to try?

Update for Finland: Metar/Taf is now working perfectly also in Finland. Great and helpful widget, thanks.

Awesome widget. METAR exactly same as published. Unfortunately in Finland the most of the time it doesn't work. It says "IQ!" Does anyone else have a same issue? But when it works it's just great.

Hi there. The errors you are encountering are definitely not normal. I tried some airports in Finland today and it seemed to worked for me but I'd like to get things working for you if I can. Please use the "Contact Developer" link (and include an email address) with more information so I can try to track down the problem. Thanks!

Great widget!!. Very useful and super easy to set up. Thank you very much.

0.8.7.2 Works great. Thanks for taking the time to troubleshoot when Garmin changes the SDK and it breaks your code. I think many users are quick to blame the programmer when in fact it's a Garmin change that causes failures on some devices.

D2 Bravo: Great app, MUCH better than the one from Garmin. Really appreciate the multiple locations and the FULL TAF/METAR, including density altitude (the built in one is useless since the temperature sensor seems to read body temperature, not the obvious method of lifting temperature from the METAR)