Discussion/Feature Requests/Bug Reports/Announcements are here: https://www.facebook.com/groups/GarminFenix3/permalink/1295076717250878/</p><p></p><p>LapHistory will display information about your most recent laps, all on one screen! Depending on the size/resolution of the screen, that's usually between 5 and 8 laps. </p><p></p><p>LapHistory allows you to have separate "column profiles" for Running vs Cycling activities. The column values are all configurable via Garmin Express or Garmin Connect Mobile. The defaults are...</p> 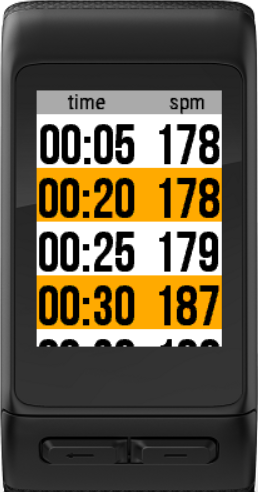 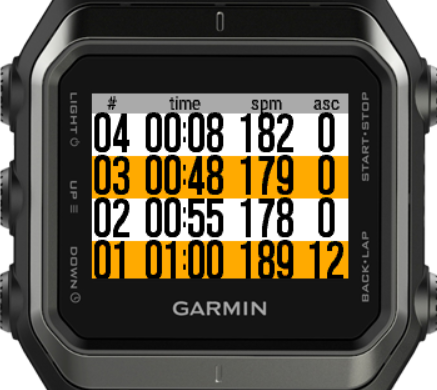 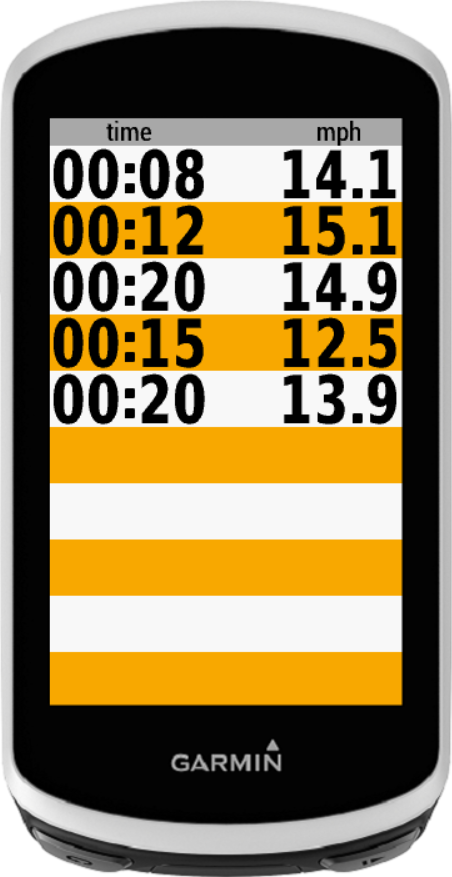 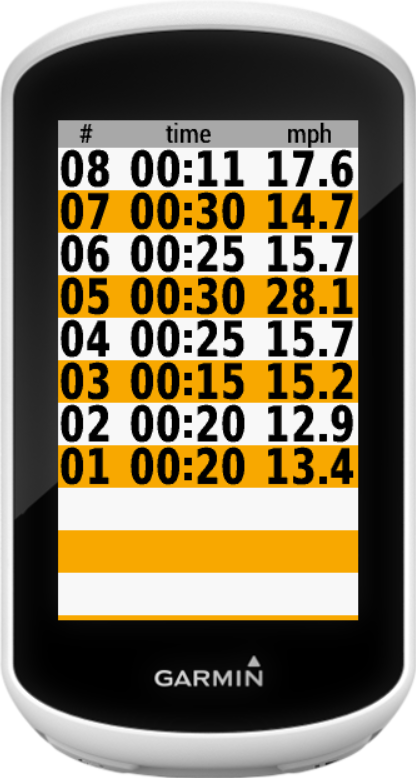 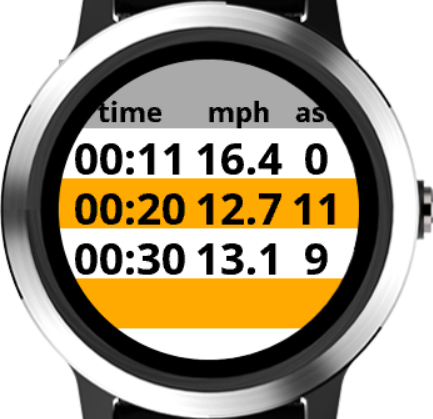 Awesome data field! I use it for running interval workouts all the time. Couple of suggestions that might make it even more useful: - Add option to view only alternate laps (great for intervals!) - Add "split time" metric which would show the total activity time instead of the per-lap time.

Thanks for the review, and the suggestions! I'll add an option to view all/even/odd laps. I'll also add a column type for "total activity time".

This datafield is extremely useful, never knew why it's not a default one. Some feedback to make it perfect: the characters are misaligned with the lines in Edge 820 (can make a screenshot if necessary), and the laps don't reset when you finish a workout (when you start a new workout without cycling power the device, the values of old laps are still there). Thank you very much.

Thank you for the feedback, and the bug report! :-) If you can click the "contact developer" link and send a screenshot, that would be great. I'm hoping to get some time to work on a new version soon...

Been waiting for someone to develop a data field like this since Connect IQ started. A really useful tool. Thank you One question though. Is it right that the app can only consider the default lap value for the activity it runs within? It would be great if it could track custom lap values if a custom interval workout is selected. I tend to do a considerable amount of interval training; anything 200m repeats up to 2 mile repeats. A data field that could handle this would really be next level stuff :)

Thanks for the review! It doesn't actually rely on the auto-lap setting (for newer devices). It'll record a new lap whenever a new lap is recorded in the activity. So if you hit the lap button - it'll start a new lap. If you hit your auto-lap time or distance, it'll record a new lap. I haven't tried it with intervals myself, but I don't see why it wouldn't work. If it's *not* working as expected, please contact me using the "contact developer" link on the right side of the page, so that I can get more information. Now, for older (ConnectIQ 1.x) devices like the Epix, there is a limitation in the API that prevents the app from getting the lap notifications. So for those devices, the app records laps at a preconfigured distance interval.

A great idea, but with the small character size this is useless for me. I want to use this during bike races so I can judge how fast or slow the last few criterium laps have been. But under hectic race conditions I need much larger characters so I can quickly glance and get the data I want. Hopefully larger character size is on the way? I'll keep it installed for now and hope for an update.

Thanks for the feedback. I'm going to work on a new version for devices that support 32k data fields. That'll give me a lot more flexibility to offer larger fonts, etc. I just need to find some time to work on it!

Great app but would be better if you could round the fields, I don't need my distance to 3 decimal places and it makes the think practically unreadable for some fields.

Thanks for taking the time to try the data field. The app name and version are only displayed for the first couple of laps (when there is lots of empty space on the screen.) It's there mainly for debugging purposes so that people know what version they're on if they have a problem. I could hide that information sooner, but many people don't have this as their primary screen during an activity, so they may not see the screen until later during their activity. Hopefully the data field works as advertised, though. It certainly takes a lot of work to make something like this and make it available to everyone for free. Please let me know if you find an actual bug or if the data field does not function as expected.

Thanks :) Very very useful during interval training :) My request is the character size can be little bigger or custom for edge 1000.

Thanks for the feedback! I'll try to incorporate that into the next version.

Great job and extremely useful for many workout types!

I set the columns to time pace, and distance and then when I am in the middle of my workout I save a lap and it automatically reverts back to time mph and bpm. When your running, who cares what your mph is?!? Why is that even on there and why would it be the default. Anyway, I hope you can make it stable so it will hold its settings in the future because as of now it's unuseable.

Thanks for reporting the issue. Can you contact me (just click 'contact developer' over on the right side, under 'Additional Information'). I need to get more information so I can recreate and resolve your issue. Thanks!

Thanks for everything. This data field became my irrepalceable field. But there is last one thing. Field name and version number can be distracting for first two laps in a race. Instead of until waiting 3rd lap, these writings can disappear automatically in (for example) 5 seconds after datafield shown or activity start. Awesome job.

Really great app. But yellow lines look a bit weird. These lines can be light grey or can be selected by user.

Thanks for the review - I'll see if I can make the colors configurable. The color palette is not very big, though. The lightest gray that is an option is what I'm using in the header. I'm also very close to the 16KB limit for most devices. If I can't make the colors completely customizable, I can probably add an option to make all the rows white.

I use this on a F3HR for hiking. It shows me how my day is going by giving me the time and speed for 1-mile pieces ("laps") of my hikes. Knowing the terrain that I went over in those pieces and what terrain is coming up, I am better able to estimate how I will do for the rest of the day. It is a big help. Being relatively new to the F3, it took me a little bit to figure out that I needed to install it as a 1-field screen in my hiking app and then set the app to auto lap at 1-mile intervals. . Once I realized that it went right in and worked fine. If I could rate it as a 6, I would. The only change I can think of would be to add a hiker configuration displaying time, speed, and ascent rather than time, speed, and HR.

Can you contact me via the "Contact Developer" link, so that I can give you a debug version and figure out where it's crashing? I did test for Edge 1000 in the simulator, but it's not uncommon for apps to behave different when running in the simulator versus running on the actual device.

I can't get it working on my Fenix 3. All I see is the word IQ and yellow error notification on top of it. Can you please advise?

Sorry to hear that! The "IQ!" screen is displayed when a datafield crashes, so there's a bug in the code somewhere. If you click the 'contact developer' link, I'll work with you to try to debug the crash so I can fix the code.

A great job. Application essential for my workouts. Really excellent.

Thanks a lot for your work! Field works like a charm. The only issue I had when I interrupted the workout with "Resume later" option. When I came back to workout the field was not able to detect running mode and stayed in cycling (and so showed speed instead of cadence). I would vote for separate running and cycling fields with possibility of configuration of these items (for running): 1. blank first row (for those who intend to use this field for showing actual lap data on round watch), 2. Choose of displayed values (together with those displayed already) - lap pace, lap distance, lap climbed meters. Thanks again.

Thanks for the feedback! :-) I'll take a look at the "resume later" issue. Configuring the column values will definitely be in version 2, but probably only on devices with more memory. The Fenix 3 (and 920XT, and just about every 1st-gen ConnectIQ capable device) is limited to 16 kB, and LapHistory is already right on the edge of that limit. (I had to cut out a bunch of code and optimize what was left to get the current version to fit.) The Fenix 5 will have more memory, so that will be supported. The Epix and Edge devices already have more memory, so they'll be able to customize the columns as well - once I implement it.