A time-oriented watchface. Thanks to Brian for suggesting this app.</p><p></p><p>Time of the day (12h & 24h format) with seconds always on (1Hz) only for compatible models, sunrise/sunset times, countdown to sunrise/sunset, moon phases and age.</p><p>With a step progress to goal bar, barometric trend, température and HR (only for compatible models) and UTC time as optional fields in the app settings.</p> 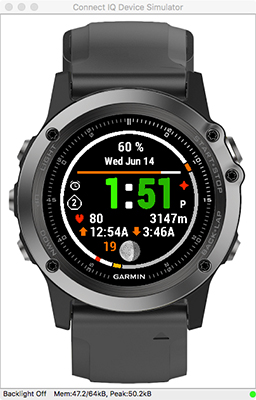 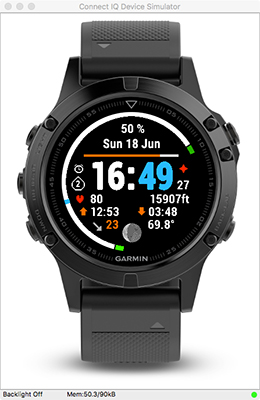 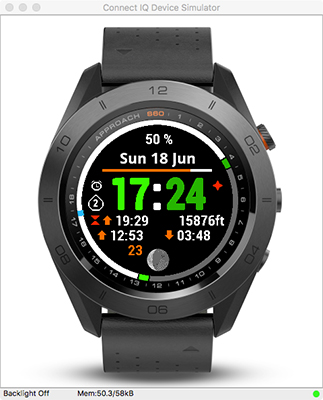 Hello, is it possible to enable daily distance? and what features will be unlocked after purchasing the code? best regards

Hello Jacek. Yes, I think it's possible to add daily distance. But with the new Fenix 6 series and other models, there is a lot of work to do on my apps so, this will be done but, I cannot tell when. The purchase unlocks barometric trend, temperature and FC data on screen.

Is there a way to have seconds always on (Fenix3)?

Unfortunately not. Fenix 3 series are not compatible with seconds always on so, possible to add this feature for those models

Great design. Everything works as advertised.

Paid for this twice - still no code!

Hello. I try to always answer within the day but, in your case, your PayPal email address was wrong so, I could not reach you until today, when you sent me a new email from another address. In that case, without a response from my own, you should have contacted me directly instead of posting a bad review for something that I'm not responsible. Thank you.

Great! Thanks for this Watchface !

Just downloaded the app and sent in a donation. Is there a user's manual that tells how to customize the display settings?

Great watchface. Paid version show Hr on Fenix3 Hr? Or Hr is the option only for Fenix5?

Thanks for your comment Robert. HR is available for all the models, Fenix 3 series and Fenix 5 series

Thanks for your comment. it's not a bug from the app but with Garmin Connect, it happens with others apps today, impossible to retrieve data from the watch.

Thanks for your comment. Can you please send to my email a detailed description of the problem in order for me to target and fix it. Thanks in advance.

Thanks for your comment. All the previous bugs are fixed, and everything should work fine now. Sorry for the last disagreement.

Love it so far.

Thanks for adding the moon age data :). Looking forward to the next update.

Thanks for your review. Unfortunately, the SDK 1.4 for the Fenix 3 does not allow to retrieve the barometric data, it's then currently impossible to collecte this data for this watch, sorry.

Great app design, but I'm a little biases, I helped design it. Everything I always wanted on my watch face. Low battery usage, 0.15 per hour with no Bluetooth and sitting idle. Garmin digital watch face in comparison, is 0.17 per hour. Check it out, you will be pleased. Thanks J-M