Enjoy simplicity and elegant style with this timeless Roman numeral analog watch face. The date is displayed in a traditional manner at the 3 o’clock position, and a step count progress indicator is located along the bottom of the dial. </p><p>Have you ever wondered why the Roman numeral for 4 on watches and clocks reads IIII instead of IV? The use of IIII is actually traditional in clock face design that goes back as far as the 1600s! There are several reasons why this may be, but today it is generally agreed that the four heavy strokes in IIII on the right side of the face balances out the heavy VIII on the left side of the face, providing visual symmetry. </p> 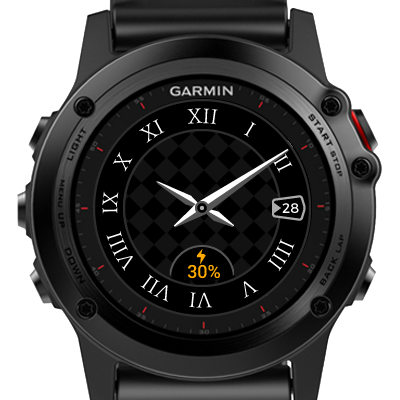 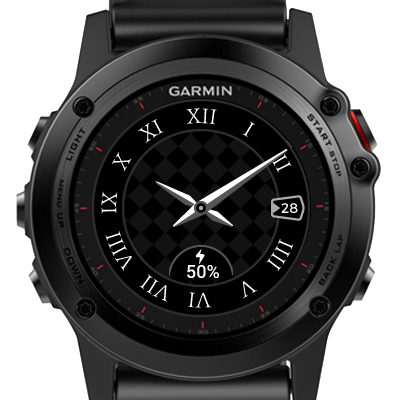 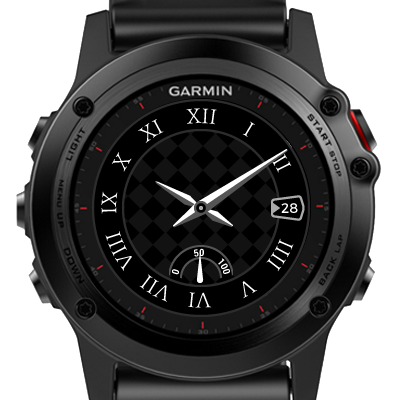 Not looking so good on Fenix 5, probably because it was designed for Fenix 3. An update would be nice with a higher resolution for Fenix 5 and some more customization options like colors, numeric dials, roman dials and more hands.

The design looks good. Used it for a while but found it a bit annoying that the battery remaining indicator keeps switching between digit vs analog dial on you by itself. Would be nice to allow user to choose the setting.

I think this watch design, should always stand dial gauge on the battery, and the digital switch.

Very nice watch face, although like others I cannot seem to change the battery indicator from default digital to analogue hands. :(

I love the look of this, but don't seen to be able to customise the colours at all, as per the examples you show

Good to see another watchface coming, please upgrade the pixels to resolution of newer devices. Got to agree IV looks more authentic vs IIII Keep the updates coming!

clean and nice but again, I'm expecting more from garmin: non possible configuration, no other data that we can add, no colors that we can change ...

Sorry guys, Garmin is correct with the IIII. Get used to it!

Nice and clean, and having read the buff from garmin as to why the number IIII is used instead of IV, I'm not that bothered..

Nice look but there is no "step count progress indicator" only remaining battery switching between analog and digital style. (Fenix 3 HR)

Just need to fix the IIII to IV please I think you got enough reviews now to notice it and fix it.

fix the IIII to IV please

I agree with Ju-S. Fix the Roman numeral 4, please! IV, not IIII. Otherwise I like the formality of it.

Why I can t install this watch. A communication error help.