Ever taped a piece of paper to your stem or top tube for distances or other notes in a race? This data field allows display of simple text notes on your Garmin Edge 1000 or Edge 520. Put the data field on a separate screen that you can put in your set of displays to use during the activity.</p><p></p><p>To configure, enable a new screen/layout with only one data field. Configure the data field displayed as the ConnectIQ field RaceNotes. See the section on customizing the data pages in your EDGE users manual for details if you are unfamiliar with this. </p> 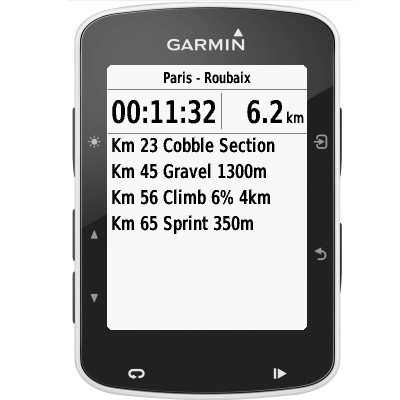 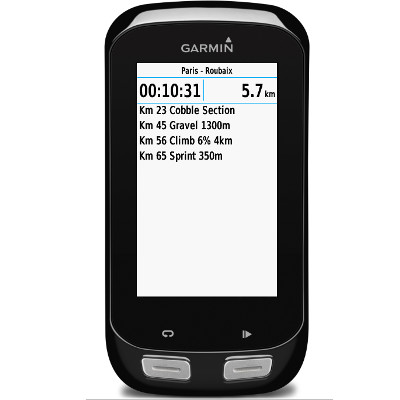 27 lines is probaly right but I can only place 200 characters in the Garmin Express "Notes Text". Am I doing something wrong?

Love the concept of this app. Works as it says but please make the text larger. Right now in the largest size you really can't read it with average eyes while you are on the bike. That's the only thing missing from me using it.

Thanks indeed for the fast updates. I stil can't get all the data I want on the screen but maybe these adjustments can help: - entering title Text: if empty just don't show (you win 1 line of data) - above you have a timer & the distance in columns, maybe you ask users if they also want 2 columns for the notes. That way we can add 2x the data. Automatically cut the the text so it's fits the columns. Still not great but better then the current 1.3 version or not? - the best solution would be that depending on the amount of data the screens are automatically created. Now we have 1 screen but when you enter a lot of data you get automatically 2 screens with notes. If interested you can download some

Thanks for a new release (1.3) so fast. For an Edge1000 there's still plenty of room for more digits on the screen in medium: 16 rows and per line approximate 26 digits Hope you can adjust your textinput range. Thanks for the good work

It's getting there. I love this app because as a cycle guide it's great to have in for feed stops, lunch, finish etc. The limitation is on the amount of data. If I could have a screen for each day (on some events its 3 or even 4 days!) this would make it so much better. I guess what I will have to do though is log on every day and change the data on a day by day basis. ;-)

Version 1.2 is better, more text input availible. Stiil too little.... there is more space on an Edge1000. So if it's possible to make the text data filed input larger..... Yes please!

Great idea, but too little info possible like huysp76: a bit limit. I like to enter more then 7 lines, because of for exsample more climbs info

Great idea but it doesn't seem to want to save my race notes when entering on mobile app, which defeats the purpose. Can't find where to do it on the Connect website when going into device settings.

This is a genial idea!!!

Brilliant! Thanks for sharing