The CountdownWidget shows the remaining time until a freely selectable deadline.</p><p>If the deadline is more than one month in the future no seconds are displayed but months or years.</p><p></p><p>So, if you have a closing date or your spaceship will return at a defined moment when you have finished your mission then now you can monitor the remaining time.</p><p></p><p>If you like the widget, please support its development here: https://www.paypal.me/edumarest</p> 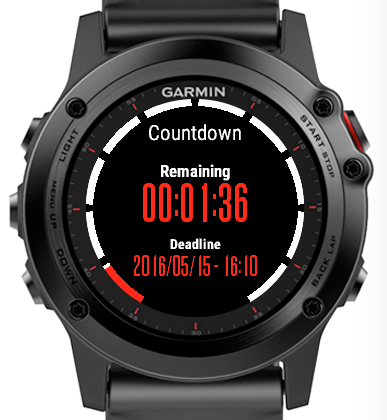 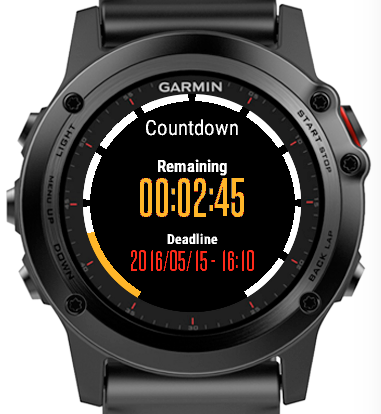 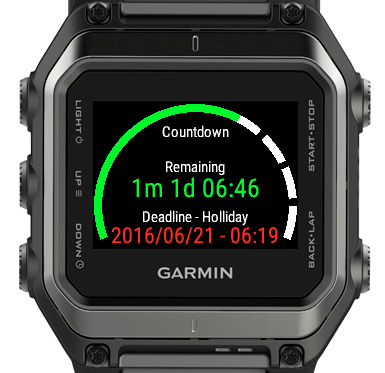 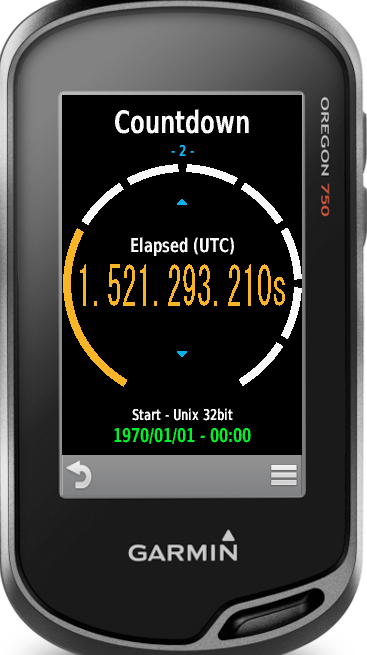 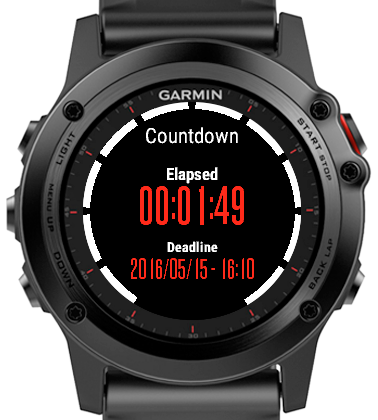 Please use the developer contact link to send me some more information. I can't fix the problem without information if the widget is running without any problem on my Fenix 3 and in Garmin's simulator.

It doesn't work on the Forerunner 920XT. There is no menu to set anything.

In Garmin's simulator for the 920XT the menu is opened by pressing the lower button on the left side marked with 3 points.

On the Epix I can start the countdown with the preset deadline (which is set for two days head) but whenever I try to change the deadline, upon hitting 'ok' the epix restarts. I've tried restarting the device and reinstalling the widget but the problem persists

Doesnt work on my Vivoactive HR tried the stating and stopping button but it would just show the IQ! symbols. Very sad that its not working properly with the Vivoactive HR

Nice tool, I can edit all fields, but i cant start the countdown on my vivoactive hr+ :-(

Did you press the right hardware button? This starts or stops the countdown in the Garmin device simulator.

Was working okay, but after recent F3 updates, only shows an exclamation mark. Tried uninstalling and installing again, problem persists :(

Please try to switch your watch off and on again.

Every time its updated I lose my timers! sorry this has promise but is not reliable

Countdown will not start on my vivoactive hr. Tried reinstall and download and still won't work.

Doesn't work on Fenix 3. Holding down settings button does nothing.

Well, that is strange because at least on my Fenix 3 it opens the settings menu.

I can not choose the time to count down.

Works. Little bit buggy, but it works fine. I can't seem to change the default name Chronometer and countdown appear the same Red text is hard to read Vivoactive HR

Okay if you have the vision of The Six Million Dollar Man. For the rest of us it's a tad illegible. I spent more time trying to add a 5 minutes timer than it took for my eggs to boil. Some apps are instant winners. This one is up there with the Sinclair C5. A good idea poorly implemented

Sorry, but it's obviously not intended for 5 minutes timers. Better use the internal short interval timer with alarm from Garmin.

i cant set it up on my garmin fenix 3 hr

This is a good App. But I do like the thicker numbers that existed before version 1.0.6. The thinner numbers that appear in the the current version are not as cool, but are still functional. If you could make the display a bit bolder (countdown numbers) and thicker, that would be great.

Thank you. I'll see what I can do. I had to change to a custom font because after the last firmware update the built-in number font didn't show letters any longer.

Does not work. Can't set it up.

Sorry, I noticed too late that there is a problem to control the widget on some Edge models which I currently don't know how to solve (but Edge 520 seems to be ok). So I removed the support for these models. Please use Garmin Connect on your smartphone to uninstall the widget from your device instead of Garmin Express.

Does not work. Cannot uninstall. Disappointed.

It would be helpful to know the device type and why you are not able to remove the widget.

Nice app, but i get ? Marks in the countdown of the days...

Crashes my 735XT to a blank screen when I exit the widget.