Inspired in Dr.Maumi 'Speed+Avg.' this app shows the current and average speed in the same data field.</p><p></p><p>If configured in a full width field it can also display both average and maximum speed at the same time.</p><p></p><p>Highly customizable. You can use colors to highlight high/low speed values compared against the average speed +/- a configurable tolerance.</p><p></p><p>Up/down arrow indicators can also be enabled to quickly and visually indicate if current speed is above or below the average speed +/- a configurable tolerance using different colors as well.</p>

Please note that all my applications are free as in free beer so you are not required to donate to use any of my apps.</p><p>Donations to support my work will naturally still be much appreciated:</p><p></p><p>https://www.paypal.com/cgi-bin/webscr?cmd=_s-xclick&hosted_button_id=7W865UNMWYUR6</p><p></p><p>Version 7.55: Edge 520/520 Plus/820 layout update.</p><p>Version 7.50: Refactoring of the UI to display decimal numbers in a smaller size to reduce clutter.</p> 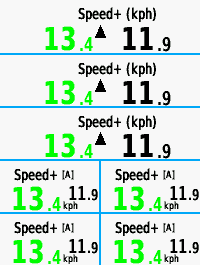 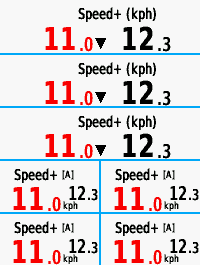 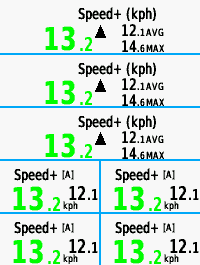 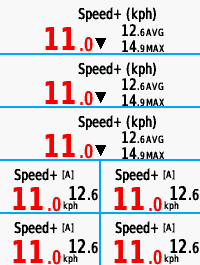 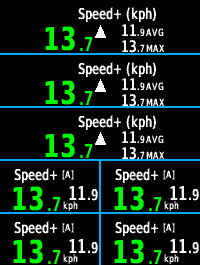 The app is really awesome, although i had an issue when I tested it in my edge 130. The speed numbers were quite often disappearing form the screen... anyone with the same problem? I’d like to know if it can be fixed. Tks and congrats

The HR+, Speed+, and Cadence+ are all fantastic. They allow more data to he shown per screen (2 items per smallest sized data field) - really increasing the degree of customization of the screens. A+!

Very nice and useful data field. I like to configure it according to my preferences! But the actual speed+ data field shows average speed always in green (default color), not in black like the others.

Thanks for the feedback. This is a bug and it will be fixed in the next release. Sorry for the inconvenience.

Great Data field! I'm very happy with it. Do you think about "elevation+" ? It will be great too!!!

I actually started to develop it a few months ago with the idea to include the grade as well in the datafield but never release it (long story). If you don't mind would you contact me privately to further discuss about it?

Great. Saves one field to get speed and average together and the trend arrow is on top :-)

the display kph is unusual, as visualization the standard of the respective device should be used, like e.g. km / h and instead of using the word speed in the local language, so only one word has to be translated.

Thanks for your feedback. Yet I’m not sure I completely understood it. Would you mind sending me an email for further discussion? Thanks!

The most useful app of all in Gamin Connect. Congratulations.

Simply the BEST speed data field in all Garmin Store. Thanks