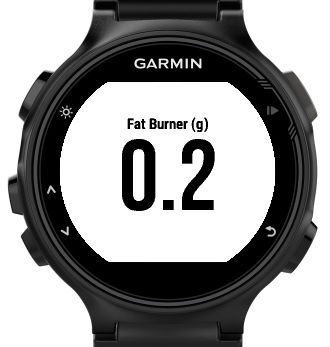 The data field integration works great! I want to see the fat burn data for the past runs in the Garmin app but could not figure it out. Would be great if you can include it in your FAQ. Thanks.

When the watch is in dark mode, we can’t see the data.

this is a "simpledatafield" class and the colors are chosen by the Garmin device firmware. Can you tell me your device so that I can file a bug report for the right Garmin device team? Cheers, Peter.

Great little app. Thank you! Just a tiny glitch that maybe could be corrected (I'm using v4.6 right now): In Garmin Connect Mobile, on the activity details screen, I am first shown the "Fat Burned" graph and then the "Carbs Burned" graph .. in Gramin Web this order is exactly reversed. It always confuses me in at the least the very first moment, since I use frequently both to view my activities. Fortunately the coloring of the two graphs is consistent, in both, the mobile and the web app.

I have defined a sort order of 1 for the Fat Burner and a sort order of 2 for the Carbs burner, but unfortunately the web app doesn't seem to always get this right. Not much I can do about this, this is one that's in Garmin's hands.... Cheers, Peter.

Carbs burnt showing fine, fat burnt is either a blank or straight line across the chart.

The app works, but in the end I always see almost the same graphic... it would be better to have some additional info to read, such as grams etc, or this way it is not so useful...

I get a graph and associated numbers (i suppose). I have no idea how to optimize the numbers. At this point its a graph with pretty colors. It seems to be a consistent angle that doesnt change from one ride to another. More information would be helpful

Works fine for me vivoactive 4..

Great Data field, would be better if as well as displaying fat in grams, could also display number of fat cals as well

Cant find the app on fenix 6 pro.Where i should be looking for?

I have downloaded the app & it doesn't show up on my fenix 6s pro. I would like to use it. It has great reviews. I don't know where it is on my device, thats why I rated it a 1.

Works pretty fine but fonts should be bigger on MARQ watches. Especially carbs and fat together looks looks much too small.

this app is of the type "SimpleDataField", here the font size is determined automatically by the Garmin watch, as a developer we have no control over it. Cheers, Peter

Can i know why fat burn come too mush when i swim in pull .i write more than 7000 fat burn

I’ve downloaded it but the data field does not show any information, it is blank...

Very good data field. But there is an issue: there is random values after pause an activity and resume later then. Random fat burn value, random carb burn value every pause, resume later, resume(((

I've heared this indeed from other people. It's best to not resume later, either let the activity run or start a new ons. Cheers, Peter.

Is there anywhere a place where I can see how I can interpretate the figures.

Once I put this analysis to my activities, I was not able to use Garmin IQ watch faces durimg aktivity anymore. Fenix 5

Amazing app. I love it. Just one question... Is it possible to get the carbs and fat dates at the same time on the Edge device? I have fat data but I don't achieve the carbs data. Only at the end of the activity.. Thanks for your job!!!!

yes you can set this in the app settings, see this topic for how to: https://forums.garmin.com/forum/developers/connect-iq/connect-iq-showcase/115055-how-to-app-settings