1.5 Add of move level indicator (progress arc in center of watch)</p><p>Add of option for solid hands</p><p>1.6 design improvements</p><p>1.7 Add support of Fenix5S, bug fix for Fenix Chronos</p><p></p><p>+++ for Upgrade users I recommend to deinstall the old version and reinstall the new version (due to new configuration option new version is not compatible to old 1.4) +++</p><p> 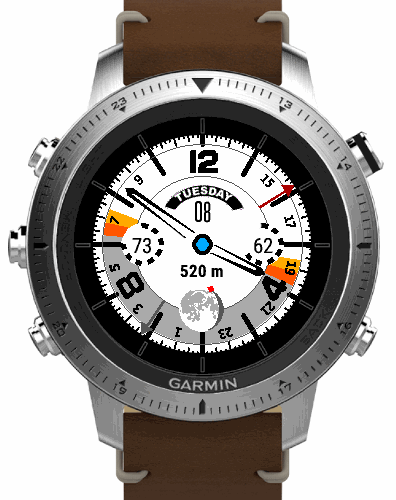 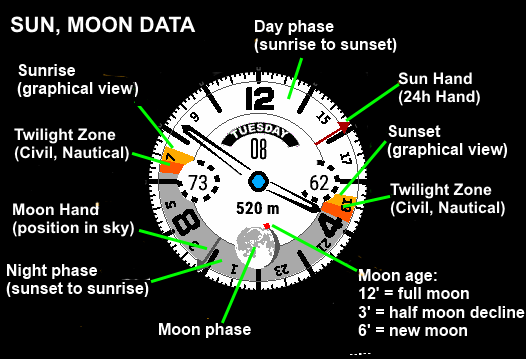 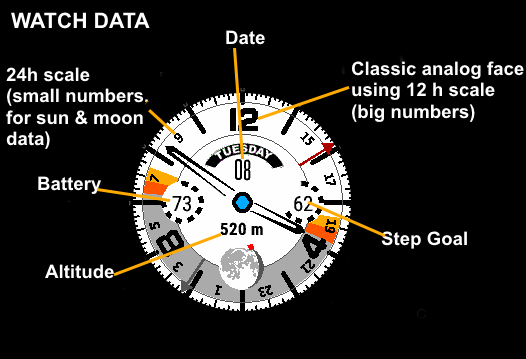 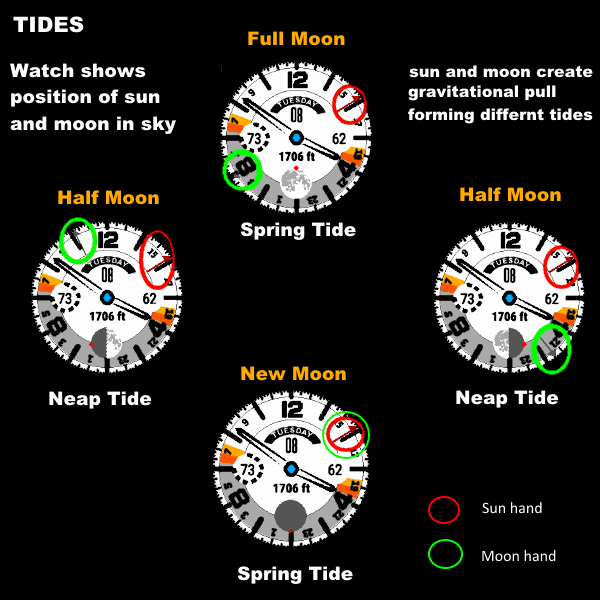 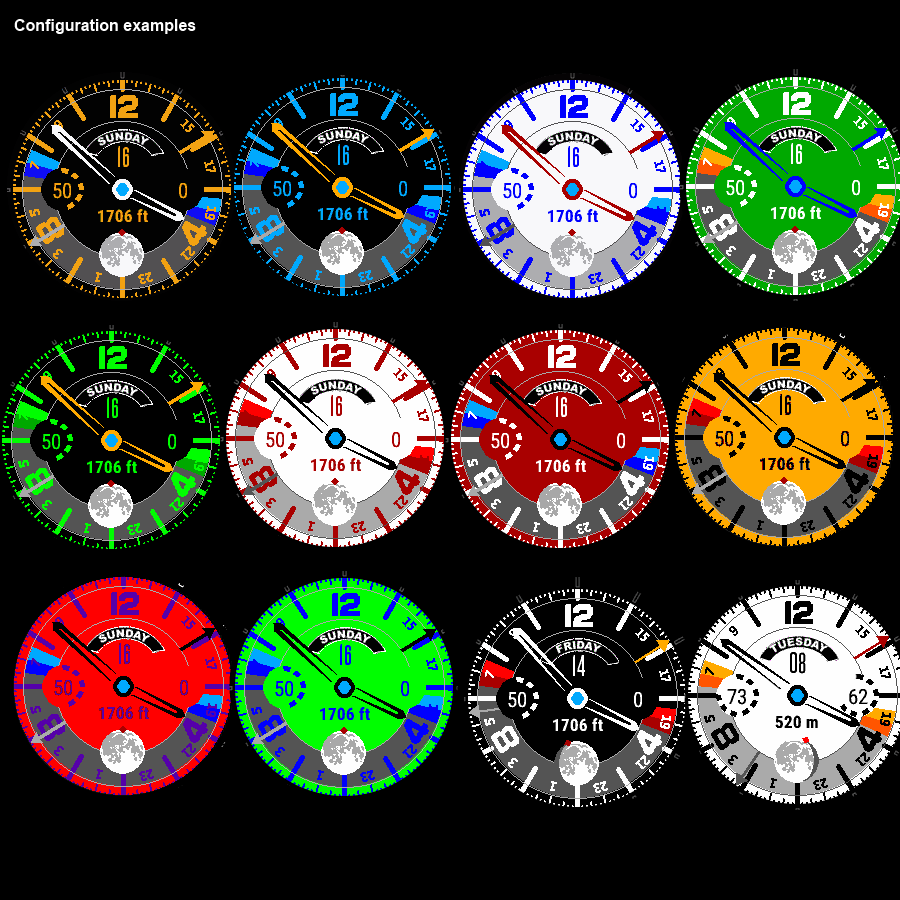 This is the best watch face. Please mark the compass

This is the best watch face. Having the information of where the sun and moon are in relation to each other is so satisfying. The moon phase icon is also so wel thought out. One suggestion would be to provide a northern and southern hemisphere option. I never knew but the moon phases are mirrored. My watch mirror flips what I see in the sky as I'm in Aust. Also my twilight zones have disappeared on my 5s.

Beautiful watch face, well balanced and nicely laid out. Heart rate would be a nice addition but it already is great as it is!

Like many others, this has been my favourite watch face since I bought the chronos last year. Unfortunately the major firmware update which GarmIn released at the end of last year stopped it from working. However, I'm very pleased that the developer has managed to address the problem and I have Moonstruck working on my Chronos again. Anyone who had difficulty with the Chronos should try the latest release. Seems to work perfectly again for me. Thanks to the developer for the work to produce and support this great watchface.

I love this watch face; however, it doesn't seem to work with the new update for my Chronos, and it rendars all other Connect IQ store items inoperable when installed on my watch. :-( Please update.

Hi, could you contact me. Since I do not own a Fenix Chrono I only can run the watch face on the simulator. Everything look ok on the simulator, so I do not know what happens on the real hardware.

This has been my standard face for over 2 months. By far my longest standing favorite! I love the detail around the moon phase and sun and moon hands. Super cool! Thanks!

Best watch face by far on here, the only thing missing for me is a second hand for doing gym work and stuff where u need to keep precise times. Would love to see the option to turn a second hand on or off in the settings.

This is one of the greatest watch faces I have ever seen. At first I thought it would be too much information to keep an overview, but I got used to it fast. This is so great. Thanks for this beautiful and informative design!

This improvement is small, but it is very important! Solid pointer is very clear! Contrast is very strong! Change the original in the dark is not good time to identify defects. Thank you for the author

The new version is excellent. Is it possible to choose the HR instead of one of the other parameters?

This is a fantastic watch face. I've always liked the idea of ones that are based on sun and moon, sunrise type info. I've tried lots of others but this is the best, it just works. I've kept meaning to add a review and suggest new features like background colours, night colours but, before I can suggest them, the developer has already done it! All I could suggest now is more colours, particularly a darker blue for the night. I shouldn't mention other faces but steam v2 has some great colours. This would definitely benefit from some midnight blue variations. Also, perhaps an option with no hands, just a digital display in the middle, then we could not have the 12h markers leaving just the 24hr markers with the sun pointer. Anyway, brilliant watch face... my current favourite!

Great watchface! Just a comment: I prefer the hands to be solid or -if not possible- the external lines will have higher thickness

Hi, I'll provide an option for solid hands in one of my next releases.

A really good watch face with loads of information that's easy to read off. One thing I really like is how quickly the watch face switches to widgets or apps compared to other watch faces work similar features. Suggestions for next improvements / update. 1 - on f3 sapphire twilight and sunset/ sunrise impossible to separate as in the images. It just comes as 1 coloured block. 2 - the dark silver colour is not quite right. Looks a lot lighter than in the pictures. Any chance could change this to darker grey the next version please like in the pictures. 3 - more colour options for things like blue tooth and the moon image. Would change to dark blue and have the moon image black when moon is not visible. 4 - option to remove notification icons completely Thanks for the effort that has gone in already!

Hi, thanks for your feedback. About the color options: In the new release 1.4 you can now also select any color for the night phase. Also the twilight can be changed. But for all color options, I'm limited to the Fenix3 color palette. You can also contact me, in case you have any special questions or requests. Cheers!

Great watch face. Would like to see the tidal bulges as time progresses. And it would be even better if the bulges would change sizes to reflect the neap and spring tides. It's my current favorite watch face and people are always asking me about it great job!

Hi, thanks a lot for your feedback! Keeps me motivated to further improve this face :-) I'm actually thinking about this feature for tides. If you like you could help me as a beta user. In case you are interested, just contact me via the contact formular. Cheers.

Thank you very much for the improvement! Now the dial can be configured more, and more powerful, can become more personalized! I hope the author will continue to work hard to make better and more dial! Applause for the author's selfless dedication!

This is a great watch face. So much interesting information if you are the type (nerd) who's going to dig into the details and keep an eye on the sky. It's a bit corny, but as I watch the sun and moon march around the perimeter of the watch--and see those same motions in the sky--it gives me a sense of awe and connection to the planet. Well done. The only improvement I would request would be to add a "move bar" to supplement the step counter. Probably the most elegant place to implement it would be in the white circle that surrounds the blue dot in the center. Divide that circle into quadrants that gradually light up as the watch detects inactivity. But there are certainly other places the move bar could be located. Thanks for programming this face. Much appreciated.

Deep red Numbers whose hands with white dial with dark blue, very beautiful and gorgeous! Expect the next time, plus the dark color and phases of the moon can choose to get a better and clear bright colors to express! Thank you very much!

I'm very glad to repair so soon! See your reply is really exciting! Remember to give me your first picture, I don't know whether you like it, don't know you to realize how hard it is, I do think it is very good very clear! Although you also have very feeling and aesthetic feeling of science and technology in this version! This is my E-mail address [email protected], don't know if you can contact to me? This is the picture http://ci.baidu.com/zOSSkpP3Hw, verification code: NXSQ. I very want very to want to you can help me to realize it! Here is the latest version of the actual rendering http://ci.baidu.com/wqqWhNtnk9, verification code: kihz I propose a toast to you.

This time, the improvement of the dial that makes it feels dye-in-the-wood of science and technology! Thank you very much! Steps still some Suggestions: 1, the target to the actual steps, because in its periphery points have expressed their progress. 2, the pointer style can choose some more. 3, the representation of a week from left to right half a circle with a pointer, said at a glance that can see what day! In addition to the improvement of this time there is a question that MuShuGuang position some look not to understand. Very wants to communicate with you, but not the cause of China's communication with you mail, only in this way to communicate with you. Thank you again! http://ci.baidu.com/iN3EgYiT85 ，验证码：nkk7

Downloaded last night & uninstalled right after that. No real value added compared to other watch faces. It is not much configurable except for black/white background & colour of twilight. Would be more useful if it can show sunset & sunrise, high & low tide times, weather forecast, temperature, etc etc. Or less not worth to waste memory space on this!

Instead of insulting other people and discredit their work, why don't you just read the documentation. Everything is described very well. And if you don't like it just don't download it. Absolutely no need to make such ignorant reviews. And if you have suggestions for any new features or improvements you can contact me directly or in my forum, like many other users do.