Up to 9 data fields on your screen. There are 8 preset layouts and you can also create your very own with the mobile app.</p><p>---</p><p>Please read the full description before using the app or leaving a review. If you have questions, consider using the link 'Contact developer' on this page to send us a message.</p><p>.</p><p>_______ Adding this data field to an activity ______</p><p></p><p>This is a data field. Unlike apps and widgets, it does not appear on the watch menu after you download it.</p> 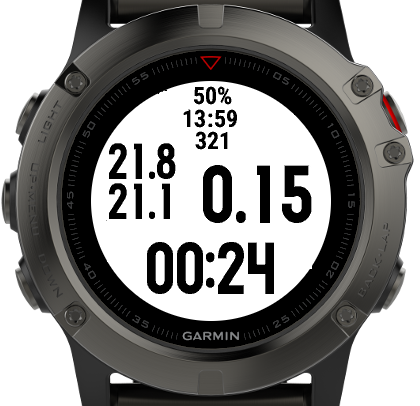 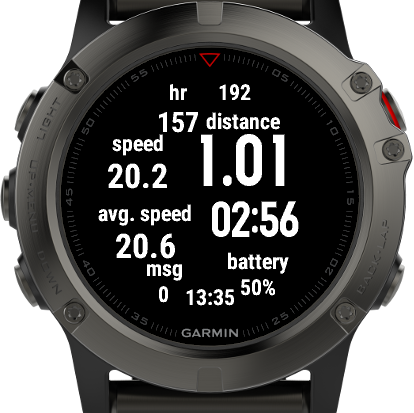 After you have understood how it works, it's a very very good method to customize your screen. Also the support by Rodrigo ist fast and very helpful! Worth every cent.

My favorite running data screen! Holds the most information in clear layouts (many options) that are very legible while running. And, the developer is super responsive :-) Well worth the Pro version. Thank you!

This is the top Data Field for Garmin, works perfectly and is costumable in different ways, and lots of Thanks to the builder, Rodrigo who is very fast and helpful with any question.

Absolutely excellent data field. All information is bery visie and fully configurable. Plenty of preset layouts to chose from. Many thanks to developer!

Really nice app with Lots of information Just on only one screen. First i tried the trial Version anderen then updated to unlocked Version which worked very good and fast. Nice Support and good work

It is a very nice app letting you modify the layout en output on screen. It didn't deserve 5 stars yet because it lacks a number of parameters that could have been added easily, like lap time, lap pace/speed, lap distance. Therefor I still have to toggle if I do tyrainings based on that. Another point that prevented the 5 star rating is that the GUI when setting the field does not really display the on screen view of your device, so it takes repeated manipulations to make the screen perfect. Otherwise, a GREAT APP, keep up the work (and add more allocatable parameters in settings in this APP )

The app works as described, I was bummed out to find out I needed the paid version to actually use it for a full work out, but it does work as described, i spent a bunch of money on my watch and will not spend more to use extra features, I will make due with out this app.

Had great fun creating my own screen and configurations of data that I wanted to see. I just love that I no longer need to flick to a different screen to find the next reading I need. You can have them all on one screen!

This is a great app that provides great flexibility and will continue to get better.

This is a great app. It's totally configurable so that it shows exactly what I want to see during my runs. Lots of information on the screen and all of it readable.

I am as happy as a kitten! I started with the "Vanilla" version and it was way to "all around" for me and my FR 920XT. Then I discussed it with Rodrigo and he advised me to download the WYSIWYG 9 r.485 interface to customize it to my personal wishes.... long story short I customized it by fields/position and font size! its a wonder you can without being a programmer be able to really make it the way YOU want! Perfect score! KUDO's to Rodrigo David

I don't write many reviews, but I do have to comment about how great this app is (and the two other r.485 apps I have) that I use on my Garmin Fenix 5X. I have even higher compliments for how responsive the company is to questions and comments. Very impressive ... I highly recommend these apps and this company!

Just great! At last I can use one screen on my garmin without straining my eyes on the run but with additional info if I can slow down for a moment and look harder. Part of information in very big digits and the rest in readable but smaller digits. Great work, thank you!

Very flexible and easy to set up. My fabourite data field