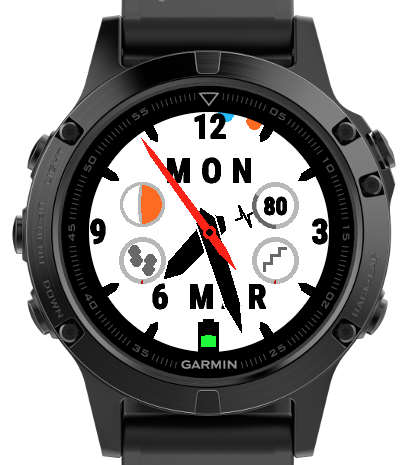 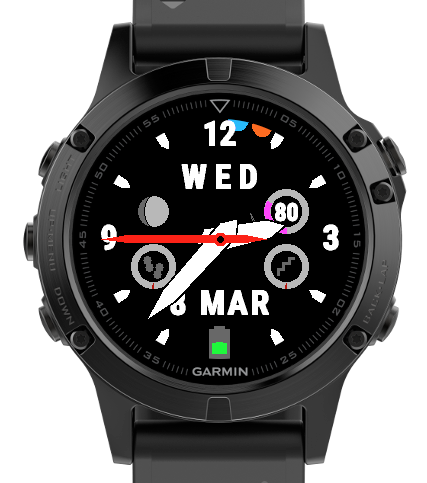 Great clear face! Can easily see in and out of doors!

Very nice design... but I do need steps numerically. They could be in place of the date? Not bothered about stairs myself. Also battery indicator too prominent and covers 6.. a smaller icon elsewhere maybe just battery % would be enough.

The original idea behind this watch face was that it be easily visible for long sighted people (including me) so tiny fonts showing numeric data are not in keeping with the underlying design philosophy of the face. The battery icon replaces the symbol at the six position rather than covering it. It sounds as if this face is not really suited to you. There are plenty of alternative watch faces on CIQ with busy designs crammed with all sorts of numerical and graphical information. These might be more to your liking.

You finally fixed the sunrise and sunset. Thank you!!

On the Vivoactive HR this is my favourite watch face. It is incredibly readable, even in dim light, and shows: time, seconds (when active), weekday, day, month, heart rate (and colour coding of hr range), steps and steps goal, floors and floors goal, sunrise, sunset, moon phase, battery and bluetooth status. That is absolutely excellent for such an uncluttered interface. Love it!

Sunrise and sunset icons no longer show on the face. I have updated the app and restarted watch but icons still missing.

Really nice to have a analogue wf that I actually can read without glasses. Thanks great work.

A very nice watch face, informative and easy to read with my glasses off. I’m not certain since we are very close to new moon, but does the moon phase take north & south hemisphere into account? It looked like it was giving me a “C” shape for moon phase yesterday when it should have been a “D” for last quarter in the southern hemisphere. Also the sunrise & sunset icons don’t look right. Today I have the red triangle (sunset) at about 6:20 and no sunrise icon visible, but for where I am it should be 6:35am sunrise and 5:01 pm sunset. My watch is a vivoactive HR.

Oh yah it is fix now

I try twice to download this watch face on my finex 5x unsuccessfully. After sync. and scrolling to choose the W face the screen show IQ! at the middle of the screen.

There was a dormant December bug. Hopefully now fixed.

Great watch face. I'm using this on the Viboactive HR. I'm having trouble getting the moon phase to display correctly.

It has no direct control over celestial bodies.

maybe you bring back the pure black hand on white background. The gray/black version is much harder to read from my view. Thanks a lot

You can choose this in settings

Love this watch face and as I work in ophthalmology I will be recommending it for anyone over 50! What is the red triangle which on my watch fave points to between 25 and 30 past? Chris

It's an analogue month hand - a watch has twelve hours, a year 12 months. If pointing half way between 5 and six then it's May and about half way through the month. You can switch it off if you prefer to display month names. All the best, Drew (50+).

Very useful and very nice for my fenix 5x I can't see the blue and red point for sunrise and sunshine... I have use GPS connexion but nothing appeared. Is it a bug?

Interesting. The software works on the SDK F5 simulator. It may be working as planned. An analogue watch only shows 12 hours which means, as an example, events 1 hr and 13 hrs ahead would occupy the same position on the face. This means events 2 hrs and 14 hrs ahead would look 1 hour apart with the earlier event seeming to occur later. To avoid this ambiguity I limited the look ahead period for solar events to just 12 hours. The problem arises when two solar events are close together in a 24 hour cycle ( if at more Northerly or Southerly latitudes in summer or winter ). The 12 hour window from the current time to 12 hours ahead may not contain a solar event. I will need to reconsider the algorithm. I bet you are quite Northerly or Southerly. Thanks for your feedback.

Nice face. Now my top choice. Easy to read. Could you please add UTC time by adding a new hand. This will make my all time best.

Thanks for this watchface - for me very useful!

Thanks for implementing the requested features! There is always more, of course... ;-) Great would be the following options: Toggle date: bold or not, and even omit Toggle showing or not the additional indicators such as steps etc Thanks!

Update: 2.4 finally works on epix. Very visible watch face! It will be nice if you add an indicator of the blue tooth and distance traveled.

Still does not show on epix

Epic does not support Math.floor( x ) but (float).toNumber() seems to work in the same way so should work now.

Good, high contrast watchface. Small issue, on my Garmin 235, the date and 12 o'clock almost overlap...can you move the day of the week a bit lower? Thanks!

This is a great watch face. Not sure why my second hand does not display. Only con is that at times the watch hands hides part of the date information. Hopefully I will get the second hand to display if I change my settings.

It is not possible to display the second hand continuously on third party watch faces - Garmin limits this to conserve power on the device ( the exposed API requires a complete redraw of the watch face for each tick of the second hand ). I agree that the hands can conceal elements of the face. I wanted large bold hands so as to be presbyopia friendly, the thinking being is that when all else fails in low light conditions I can still tell the time! I might try perforating them so that some of the face can show through. Twin lines close together can provide good contrast and be easily visible. Thanks for the feedback. Drew

Great. The best watch face. Thanks a lot.

Really like the watch face. For those of us that are Presbyopic it helps. I wish other designers could come up with easy to read watch faces for the older crowd. For some reason mine won't change watch face colors in the settings but that's ok. May be something wrong on my end. Thanks.

Love the face but today for the first time I'm seeing what looks like sun bursts at 6 and 7. What are they?