Ok, this is another complex field for Connect IQ.</p><p></p><p>I like to see data while a run, and specially in a graphical form (too many numbers on display are hard to read while running), so I wrote this data field. Maybe someone else likes it, so here it is.</p><p></p><p>I test it myself in my FR 230, but if something goes wrong, just let me know at [email protected] and I will look at it.</p> 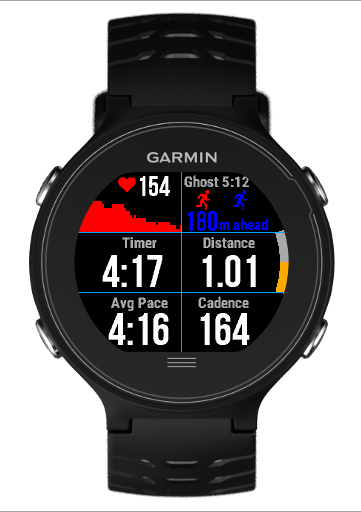 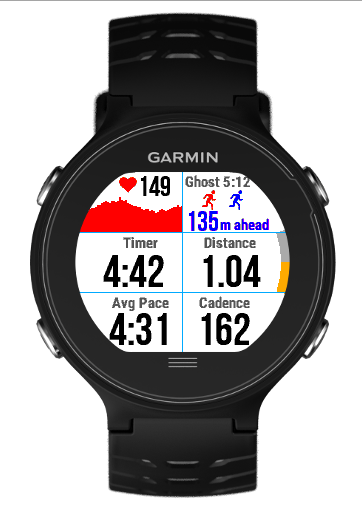 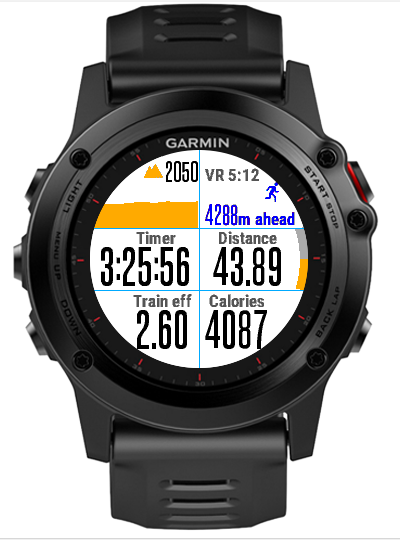 Great app. 4 stars because there is no option to use imperial measurements. Can that be added?

4 stars because there is no option to change settings to the imperial system (distance in miles). Other than that, perfect. Add this option and I will give 5 stars

I miss the lap info (available with the updated IQ). Nice app after all

used today in the half marathon : perfect!

It crashes and reboots.

I will vote 5 star now. The latest version could work smoothly only in "Run" mode if GPS signal & HR are ready but in other modes it still crash, though not roundly restart.

It crashes for me too and the watch is rebooted.

Garmin 630 with firmware 4.10: When I activate it, it crashes and the watch reboots.

I like the layout and all the options (specially Ghost for the race day). Few tweaks I would propose is: option to put time behind/ahead of Ghost instead of distance and bigger (maybe overlaying the graph) digits for top-left HR (it's quite small to look at if in race condotions). I rate it only Okay as it has an issue (FR230) when activating the field - as mentioned before it crashes the device. I think it is related to the fact that both GPS and HR readings need to be available in the exact moment of activating the data field! If not - device crashes. I think it should be fairly easy to introduce some IF statement in the code preventing this to happen... If this is fixed, I would rate it 5*

It looks awesome but always leads to cycle-restart on my fr235, which disappointed me a lot.

Love this, works really well on my FR235, the ghost feature is so motivating :)

Actually a nice Datafield, however as somebody said before, it crashes on my fr235 all the time to a complete reset, I guess it has something to do with the sensor either GPS or HR Monitor, because if I dont start the run the datafield is still ok.

It is works great on my 235，love it very much！I was wondering if maybe you wanted to make a data field only for Virtual Pacer？I really appreicate it.^_^

Love the data field! It would be awesome though if you could develop a data field with only the ghost part, showing how far ahead or behind you are of the set pace partner. Just the top right of this field in its own data field would be amazing!!!

Good data field. But the first time I downloaded it on FR235 it kept crashing and restating the watch until I uninstalled. When I run the updated version, it doesn't restart anymore but resets the watch face to FR235 default face. Can this be fixed? Irritating bug.