This is an application that has a score counter to keep track of the score while you play a squash match. It also displays the number of steps made, the heart rate, elapsed time, and calories.</p><p></p><p>To start recording the activity, press the menu button for a couple of seconds. To stop the activity, do the same. The activity can be downloaded using the Connect IQ app, and it is displayed as a Tennis activity (the closest available to Squash).</p>

v2.0.1: Updated SDK version to support new models' features. Removed support for old watches and added newer watches as supported devices.</p><p>v1.2.3: Updated for new models and removed older models that don't support newer version of the firmware.</p><p>v1.2.2: Some small improvements. Added a confirmation dialog before quitting the app, and the serving player is highlighted.</p><p>v1.2.0: Now the application is configurable. Player names, maximum number of sets, and maximum score of a set can be configured.</p> 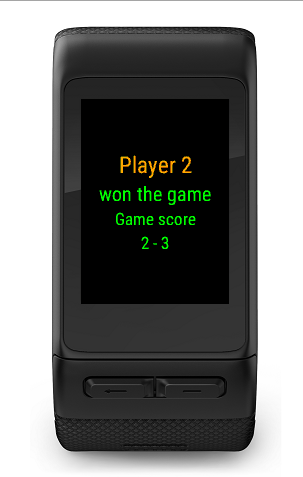 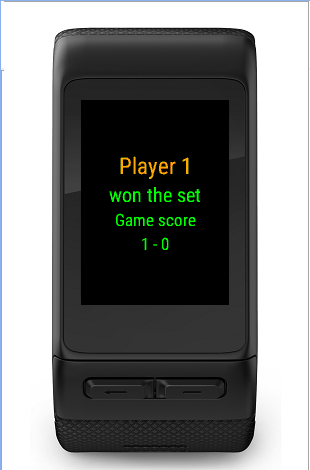 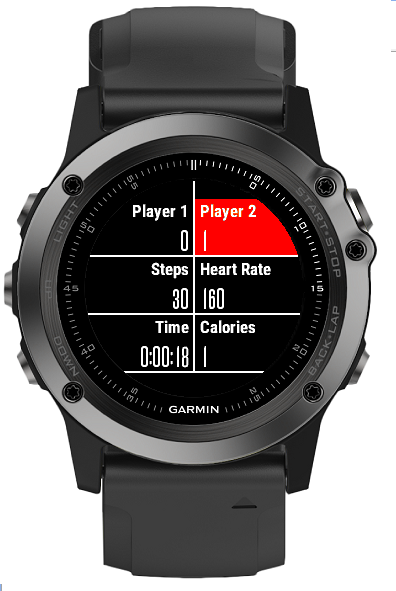 I am using it for badminton tracking. This is the only apps I've found would track steps, calories, heart beat, etc.... Not care much of score keeping because the game pace is too fast. I am not sure how accurately or detail of the step tracking as the game actually works hard on stepping back and forth. The effort of changing stepping direction is much more intense than just counting number of steps. I hope there is some type of work effort profile to carefully define calories consumption upon different movement for different game. Certainly for any racket game, these watch does not track the swing of the racket unless being wore.

Thank you for update for vivoactive 3. Nice application.

Download the app for my new Vivoactive HR but could not figure out how to start the activity! Pressed every button and part of the screen and the timer would not start. As a result it did not show up in activities in the website so I could analyse my heart rate which is disappointing. Called Garmin but they could not advise on 3rd party app even though it's downloadable on their website. Could someone please respond to this or write another review with or links with instructions please. Thank you.

Hi, You should long press the right button. Then the watch will vibrate indicating that the activity started. Do the same to stop the activity. Hope it helps

Super app. Is it possible to build it for Garmin Vivoactive 3 as well?

Good application, but could it be modified that the score reaches 35 per set? Thank you

You can configure the points per set through the app settings.

Works quite fine on my Fenix 3HR. Would be nice to see detailed score stats (set by set) as well, on the activity record, instead of only match wins.

Hi, can you configure to modify the score? I want it to end in 15 or 20 points. Thank you.

Does not work at all on vivoactive hr

It has not worked well since last os update. HR and steps are not accurate. I like this app and i would like if it will be ok.

not working on Fenix 3HR

Not working on Fenix 3 for me too. All updated to latest firmware. Would be v happy to see it work too!

I've been using the app for a while now and have found it to be really good. It would be good if the font for the point score was a little larger for us with older (more experienced??) eyes and perhaps changing the colour of the highlighted player from red to light blue or yellow.

Hi, I really appreciate App and I have been using it a couple of time on my finex 3 HR. It would make sense to increase the font size a little bit, because it is very difficult to read the score. At least for me ;-) Best regards Oliver

Nice app, thank you! But there are lots of users playing tennis. Could you please add Tennis? Would be wonderful

I use a Fenix 3 and couldn't work out why app wouldn't start with usual start button and then read you need to press and hold the menu button once in activity to start it. A little annoying as would be good for app/activity to start & stop the standard way. Also I dont seem to have any customisable options other than status or move. Would be good to be able to hide scoring if you don't really use this feature. Pretty good app though.

Used on a Vivoacitve HR, and I do like the app a lot. Number of games won by each player transferred to Garmin Connect, the score of each game did not transfer. As a bonus, a separate lap is created after each game so Garmin Connect has stats for each game (such as time, heart rate, etc). The only annoyance that keeps it from 5 stars is too often I press the point square and nothing happens. I would say 30% of the time it does not register a point after the first tap. I try to tap in various places within the square, and it is just quite picky. I might in the future change the game score to 1, and only record who wins each game. Oh, if only the Vivoactive had buttons and I did not have to tap a touch screen the app would be perfect. I really only need to see heart rate and time while playing squash, so the app nicely handles this. Well done app developer.

I can't understand how this company lunchs this app without testing properly. When are you going to lunch a tennis o padel app?

Great app! From last upgrade is not possible change the name of activity (in app). Every time I try it, the app crashes down. Please fix it. Thank you very much.

It will not start on my Fenix 3??? Would be great if it worked

Finally there is some application for those who like to run, the bike, swimming ..... and also we like racket sports. That the Garmin's have us a little forgotten. Ufffff does not work on my Fenix ​​3 HR, I have installed it 3 times and nothing .... has solution?

Installed on Vivoactive HR, but does not show HR. :(