Add a little entertainment value to your Garmin wearable! Enjoy Blackjack, the casino favorite card game, on your fitness device. Bet strategically then face off against the dealer to see who gets closest to 21 points. </p><p></p><p>Like this app? Get the key to and support our developers at https://app.simplegoods.co/i/AFNKPTDP. Enter the key you received in the app settings. Thanks!</p><p></p><p>Version history:</p> 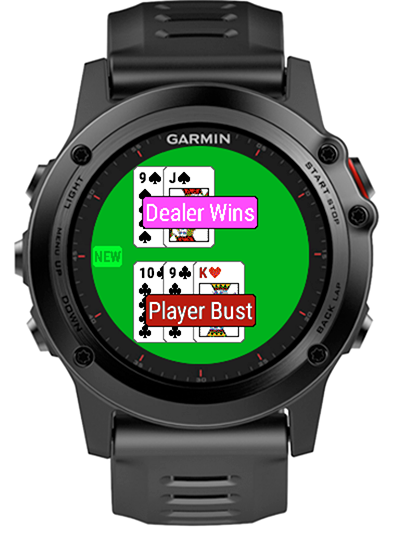 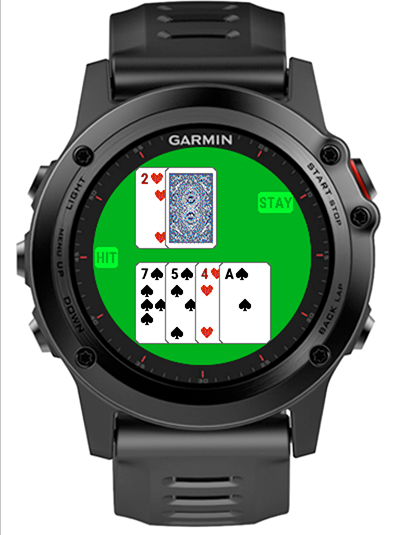 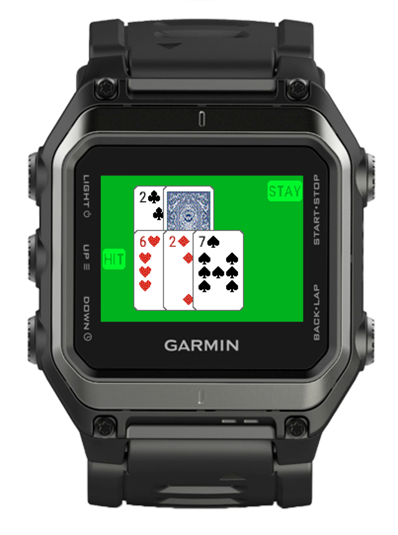 Key I recieved does not work, app is unplayable, no way to refund money. Bulls*it

Slots on the 5x please?!? Really missing your game!!!

This is also working perfectly with my Fenix 5x version 7.10 great! Thankyou for making it happen! :-) Would you let me know if you intend to make "Slots" compatable with the Fenix 5 series of watches? It's one of my favourites:-) All the best, Sam.

Superb game! Running sweetly on the fenix 3hr 4.30 Game looks really well drawn(good graphics) Really like that when you want to stop playing,the game keeps your cash in the bank(in memory) So next time you feel like playing you can start where you left off,cool! Thanks very much!

Great game. Works fine on Fenix 3. No problems with getting key if reading the instructions.

Great card game, looks really nice on my hr, Graphics look superb,runs perfectly. Thanks so much!

I paid for a key and never received it.

To simple. No splitting and x2

Crashes on the 235. Looking forward to an update that fixes :)

Does not work on my forerunner 230. Similar to other reviews it just opens and crashes. Looking forward to an update to fix it.

Not working yet on the FR230. Starts and immediately shuts down.

Doesn't work at all on my forerunner 230. Looking forward to a fix as love the idea :)

Once the game loads it instantly crashes for me. On a 230.

Update: everything is great! Simple blackjack game (no extra activities like Splitting insurance double down.......) but I like it this way. Only game I out on my Fenix. Great work this is an app I would donate to

Good start, the dealer still hits when over or equal to 17 if its hand is still less then the player, and the dealer needs to treat all ace as 11 but this one will count it as 1 when it's needed, this makes the game pick the highest number and the dealer goes 2nd, ex my last game I got 21 with 3 cards, the dealer had 2 kings, it hit and got a ace and I got a push. To top it off it has a pop up that stops the game for a short time asking you to go to a site, once at that site it wants you to pay to stop the pop up that pops up every turn. Once the other things are fixed maybe some one would pay for the app.

Now that's what I'm talking about. Great game - on a frikken watch! Works as designed and described, and most importantly, you can exit the game smoothly with the back button ( Fenix 3 ). I love it.