You don't need to know the exact time at every moment. Relax. </p><p>This watch face gives you a rough idea of the time, rounding to the nearest five minutes.</p><p>Battery and steps indicators (coloured and white lines respectively). Some status icons can be displayed</p><p>Languages Supported: English, Italian, German, Spanish</p><p></p><p>Hey, I love it when you guys email me photos of your watch using my watch face!</p>

2.0.10</p><p>Setting to force fuzzy text language to English</p><p>2.0.9</p><p>Support for Italian (Thanks Andrea)</p><p>Font size tweaks</p><p></p><p>2.0.7</p><p>Basic fuzzy text translations for German and Spanish (thanks Ingo and Sergio)</p><p>Had to do quite an overhaul to font sizing to account for longer Spanish words in particular. Hopefully things look okay!</p><p>Added a setting to display icons for notifications, phone connection, alarm set.</p> 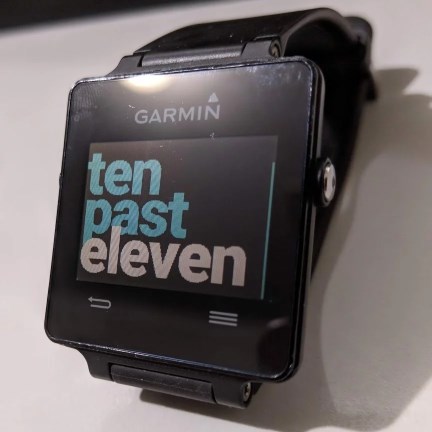 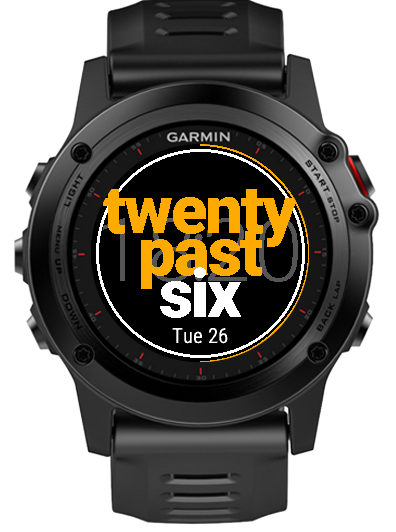 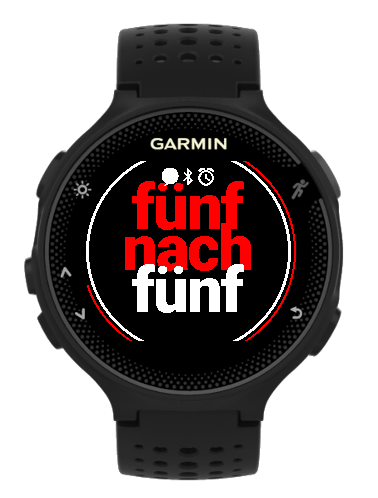 Like it, but would like to see colour change, and the front and back ground time are displaying two different times. The background time is a minute behind the frontal time.

A beautiful watch face that gives meaning to time by taking emphasis off of specificity. It will tell you roughly what time it is (and exactly behind it), and lets you quickly read with the excellent use of space. It turns the Vivoactive into a really great looking smartwatch.

Really like this one, now my default face if not in activity mode. Would like option to change colours.

Tried with 3 stars and it didn't work so I put 5 stars, which is not the case. Just bought my Vivoactive. Great watch. With what I read on this website page, I would be surprised if my review hit that page. But I understand that developers are looking for 5 stars, even when we have just installed the app. At that moment, we don't know if your app is good yet. First, I need to be able to read the time instantly and with your app, as a watch with big numbers, it does the job but I don't know why somebody would write that they like a 5min approximation of time representation when they could get the time right from what appears in background ??? Why not just put real time and forget background time, that is just hard to see when big numbers are in front. I cannot understand the purpose of that idea so I stopped using it because of that. And also, in Quebec, Canada, we use 24hours representation of time and minutes. So we don't really use ten to or a quarter to, or ten past. It is sixteen thirty four for 16H34 which would be 25 to five PM for you. Still looking for that watchface close to yours. Maybe I will have to develop it myself.

Nice one Nelson. Would like to be able to configure colors.

There is only one watch face!!!! FUZYTEXT, I have downloaded others but this one is always the benchmarks that others are trying to beat!! Steps, battery and time! LOVE IT!

Love it and have used it since I got my Vivoactive. My new Vivoactive HR is here this week - any chance of a version of it too ?

Love this watch face, use it more than any other. Quicker to read than any digital or analogue face, and the readable but unobtrusive step and battery bars are a great idea. Would love to be able to configure colours.

Great !! I love this whatch

I love this one. I have a few watch faces installed, but always go back to this. Would LOVE to see blue or green or...

I love it! It's my favorite watch face. I didn't realize until I reread the reviews & app description that the step counter was on the bottom and the battery indicator was on the right. This is great to know. It's a conversation starter when people glance at my watch. It's the only watch face I like having.

Looks very nice, some additional colors would be great!

my favorite watchface so far - well done! only suggestions would be to put the day by the date (e.g., tue) and add little notches on the battery/steps indicators

This is a brilliant watchface. It is by far the best. I love the text based, rounding to the nearest five. Includes the date and the numbers in the background are awesome! keeping this one for a while!

The best watch face. Would be better if the battery and step lines are just 2 or 3 times wider other than that we'll done.

Excellent Watch and love that fact that it is large text as I need reading glass for most things. Fact that my brain works in 5 min blocks helps although if I want the exact time it is also there in the background. Suggest that there be another version for people who need glasses to read: make the date slightly bigger and the steps and battery bars slightly wider. Assume the calendar cannot be activated by pressing a button or Menu at the bottom?