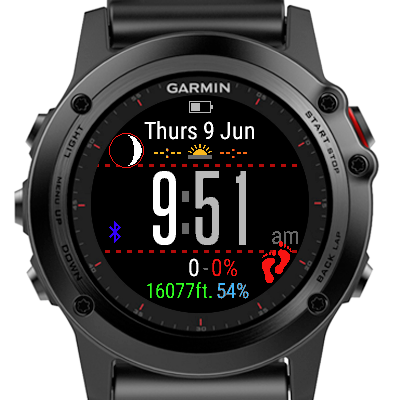 Amazing watch face. I found that when I was looking forward anyone that had tides, rip curl searchgps watches. in options there are two hour color, I guess the second is about minute color.

Would be 10/10 but the heart rate always says "null", so not completely functional.

Wish you could make use of the empty areas of the screen, I like the tide function but would like high and low tide times on screen

I like the design but the HR rate shows null most of the time. Using a Fenix3 HR

My favorite watchface! Lot's of information but not to chaotic like many other faces. I tweaked the red lines off en the circle around the moon dark grey, for me the perfect configuration. I like to see some other value than the oxygen, for example the barometer (trend?), or temperature or the steps distance. My fenix 3 HR crashes if the temperature view button is on, i hope you can solve this in the future. Keep the good work!

Very nice, very simple and has usefull information. But the red dots, are not aesthetic at all. When you take them off, I'l give 5 *. Nice work.

Great watch Face with a lot of informations. And I figured out about the small number and sign to the right of sunset: They are the numbers of notification. Great work!

With temperature selected crashes, maybe you can take some info from this developer that has temp and atmospheric pressure in the Day & Night watch face. Here is the link: https://apps.garmin.com/en-US/apps/39680ec3-5bf7-4473-ac43-e462c67df4da Keep trying we love this watch face Thank you

Error, there is no change in the remaining power.

Very good watchface! only thing missing for me is calender week info and battery percentage ;o) Please continue this great work! Thanks a lot!

Some fields not responding to color change! (steps, altitude & oxygen) Re: Garmin Fenix 3

After updating to V. 0.5 in Fenix 3 HR and choosing heartrate the footsteps are still there and the heart rate is squeezed in the right place without working

Really great Watchface, contains everything I want to see. Only one question, what is the Oxygen Percentage? I do not know how this is calculated.

Possible with an option to hide the "feet" icon?

Great watch face! I like the clear phase of the moon. If possible add the heart rate instead of steps, or give the opportunity to choose

Clean design / Best watch face without being too small to read or too cluttered, works flawless on Fenix 3. Any chance of high and low tide in place of Altitude ?

Can you add a second time zone and a barometric arrow? Thanks

Love the watch face, wish there was a description of the functions in english. I have no idea what the percentage is on the very bottom to the right of the elevation and a number and symbol appeared to the right of the sunset, again, no clue what it is. Other than that i live this watch face