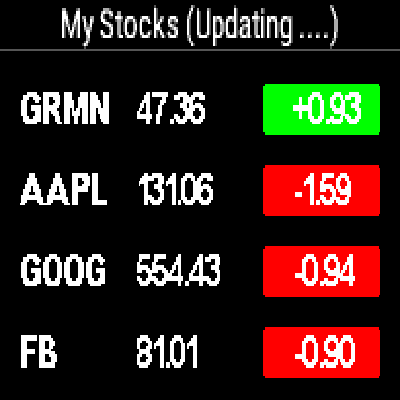 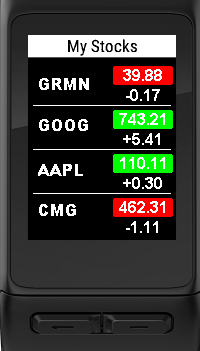 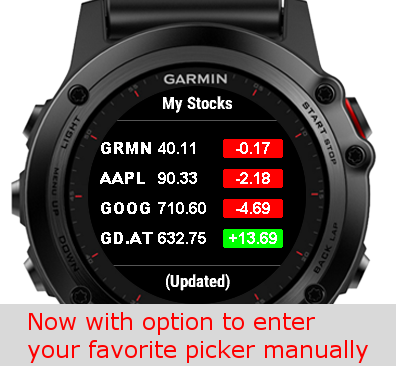 Hopefully we get an update to fix this widget. All I’m getting is the IQ error

Does not work. Error message only. Uninstalling.

This used to be a great app, but it stopped working after a few months. Tried to install and reinstall, but still get message 'Unable to ping server'. Sad.

Bad first time experience - launching the app on GR935 just gives me an IQ! error screen every time. It simply doesn't work for me. Is this actively being maintained?

I used to love it, but its been a few months it no longer works - systematically returns unable to ping server, try again later. Fenix 3 hr. disappointing, it was a fun app. btw, uninstall, reinstall several times, did not help.

Does it support BSE or NSE (India) symbols?

Can you list OB (Oslo Børs Norway) as well?

Seems to work great on my Vivoactive HR, tough sometimes i got a message "unable to connect to ping service".

Nice app, would be perfect if it would support also ^DJI and ^GDAXI, then i would buy a coffee for you

To all that are looking for the Dow, NASDAQ and S&P 500, I found a way to do it (mostly). It looks like the developer is using yahoo quotes, which no longer supports data downloads for the DJI symbol, so you can get a 1/100 view by using ^djx. So if the dow is at 21000, it will show 210, so you have do a little math in your head to get it to work. The Nasdaq can be entered as ^IXIC and the S&P 500 can go in as ^GSPC. If another source could be added in order to support a full usage of the ^dji symbol, I would give this 5 stars, no questions asked! Thank you to the developer for creating this app, it is extremely useful and one of a kind for our newer devices.

Works really well....for those interested in Australian shares, you need to add .ax after the Aus code....eg ANZ.ax

disappointed I can't get currencies to work and there seem to be no response / follow up from developer! check out - https://apps.garmin.com/en-US/apps/ea4c4f19-5017-4a4d-b0c3-80a736ceaa6e - they seem to be able to provide currencies. But then, who am I to complain about an app that is offered freely!?

Nice widget. Updates data fine, but ticker changes made in Connect app do not appear in the Widget

Definitely works on my garmin 3. Question - I can get bluechip stocks, but I am also interested in displaying exchange rates (even more so and other users are probably too??) Is there a way to do so!? I tried to enter tickers such as usdjpy, but it doesn't seem to work. thanks much!

Great little widget. It does as advertised and that is all I can ever ask for. I will recommend it to my stock loving Garmin friends.

Works just as advertised on my Vivoactive HR

Would not work for me at all

Terrific idea, you do appear to have a problem at least with Fenix 3 HR. It's says that it's updating and then says it's updated but there is no change from initial download.after ticker box was filled out, this first update was correct by the way. Consecutive updates actually do nothing.

I have a vivoactive. there is no mechanism to insert personal stock choices. There is also no instructions anywhere

Exactly the widget I was looking for. Have a VivoactiveHR. The widget pulls data from Yahoo Finance. Don't know how good this source is for currencies... Would like to see 4 decimals when loading currencies. Only watching the big figure usually doesn't help much. Would also like the ability to see when the quotes were updated, down to the second. Finally, as another reviewer said, showing the numbers in black when the background is green would make viewing them a little easier. All in all a very useful app that would be EXCELLENT with a couple of minor improvements.