This APP displays real-time and optionally records the main parameters of motion: speed (kmh or knots), maximum speed, average speed (for 10 seconds), the direction, the average direction (for 10 seconds) and the total distance traveled (km or sea mi). If you liked the project, you can thank me, it's just give me the impetus to develop the project further: paypal.me/reclaimer/1 | paypal.me/reclaimer/N [N = desired amount] or paypal associeted email [email protected]</p>

APPD: v.1.2.1 | Optimization </p><p>APPD: v.1.2 | Small changes in the dashboard, now the status of count sessions moved to locate the button for adding sessions (bottom right), the GPS status has moved to the left upward. While there is no data from the GPS on the dashboard, the waiting label is displayed. In the settings menu, the new option - Activity, select a name for your type of activity from the list, under this name the lesson is saved and then it will be displayed with GarminConnect. The name of the activity is also displayed in the Session View menu.</p> 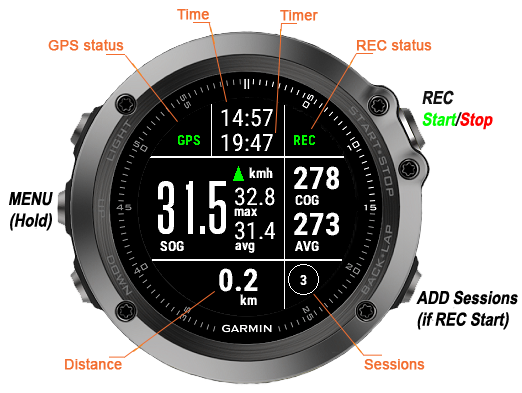 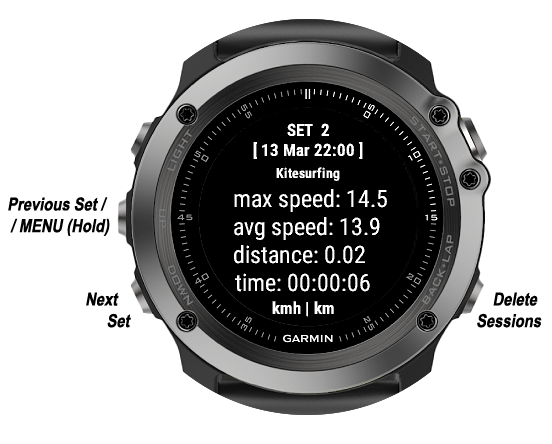 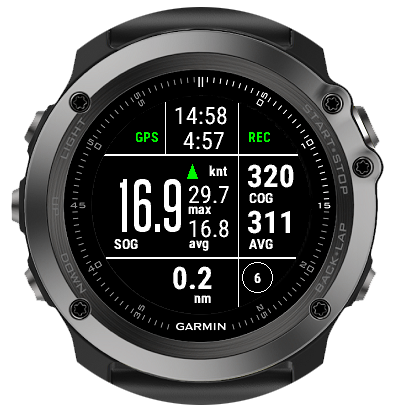 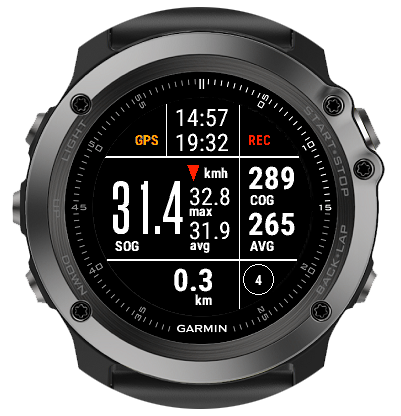 Hi! I had a fénix 3 and the app was wonderful! No complaints, I recently purchased the vivoactive 3 and would like to know if you could make it available for the watch.

Great application, but the distance is not displayed at the end of the session. Impossible to track back what I've done... Kind of disappointing

Great application. I used for more than 2 years. BUT, recently, the distance is not recorded. It's everytime at 0. But the track on the map is available. Can you tellme why I have no more distance after my session ?

Hey this is great on my Phenix 3... but i am about to switch to Phenix 5 and i discovered it is not compatible... can you make a version for Phenix 5 please?

Just tried this out on a Garmin Quatax 3. Performed better than expected! Very easy to use. Easy to see in "Cruise mode". Worked flawlessly with Samsung phone. Convenient to share of Facebook. Now I can foil offshore Florida. Thanks.

Great app, I am using it always when kiting. The controls are slightly different than other apps, but you'd learn quickly how to operate it and than it's piece of cake. I was also a bit confused with the REC icon. REC is recording (from the TAPEs ages) when RED. Here it must be green, which is aligned with other - green = tracking. Again, once you get familiar with details, it's perfect. Instead of session timer, I'd appreciate session duration. Thanks

Thanks for your feedback :)

Freezes my watch when I open the app! Can't get out without shutting down my device. Gonna try one of the others, a pity as I kite a lot and this one looked like the best:(

This application is for those who know how to use their devices ;)

Great App, and the communication with the developer in order to resolve any question is great

Thanks for your feedback! I'm always happy to help, and I will answer questions!

Nice App, Is it possible to add Max Elevation for Height of Jumps? would be a nice thing to include in future versions.

Hey. It makes no sense. GPS works slowly, an error of 3-5 meters. I tested the height measurement - it does not work on similar devices. To measure height, use special devices such as PIQ or Woo.

The device hangs when the app opens. Fenix 3HR. Button BACK don`t word. I have to restart my watch

How did you get bored with such people? You do not know how to use your device ?! Go to the menu - the standard middle button on the left, hold down for 3 seconds! The "back" button has another function in the Cruise View. In the description of the application there is a picture with a description of the buttons - for whom is it? ....

I also have the problem with the app on Fenix 3HR. The device hangs when the app opens. The watch is brand new.

I use the application almost every day. I can not solve your problems from a distance, if device is new - it does not mean that you know how to use them ;)

I just upgraded to Fenix 5, can you make it available for this?

No. I not have f5 for testing apps... but you can donate me f5, and then the application will be :)

Very good application but I have two problems, 1- each time the application writes exactly 20 minutes and stops ... 2 - you can not leave the application only if you completely disable the clock. How can these problems be corrected?

In the settings, change the timer value or turn off the timer (this is written in the description)! There are a few glitches in the application, there is no time to fix them, but I'll prepare a new version with fixes.

Very good app, I was looking for something for Wakeboarding or kitesurfen. Thank you very much!

I really love the Dashboard, Only downside is the REC status icon, i find it unclear (at first use) if its recording or not since its just a color change. Also, I don't understand how autorecord works, I tried it this morning and It recorded everything except when I went to ride (stoped recording exactly when I started riding in the water.) I think it should record always whatever what you do with the start-stop button. Good work,

Thanks for your feedback. I recheck the autostart, perhaps there is an error in the logic.

I love your app. It's just what I needed to measure and record my sailing sessions. The interface is simple, clear and intuitive. As you say, it can be used for any other nautical sport. It would be great that you clone it with a more generic name like "Sail Tachometer", "Sail Compass", "Sail Cruiser " or similar and so others interested in sailing sports will find it.

Thanks for your feedback. I'll think about changing the name. But it's convenient for me that in my watch the program is called so - for what I use it ;)

"as soon as I opened the app on my fenix3 the device froze! I had to restart... shame it did not worked... I was excited about using it!" I have the exact same problem. Don't know how to fix it

as soon as I opened the app on my fenix3 the device froze! I had to restart... shame it did not worked... I was excited about using it! =/

Or maybe the problem on your device? ;) Look at the comment below

Been looking for this for ages, thanks to the developer for building! Tried out for a session today, and it worked very well. Clearly laid out data fields, and a sensible menu/interface. Plus I no longer need to change my activity type when I go out

I'm glad that you liked it! Thanks for your feedback, good luck!