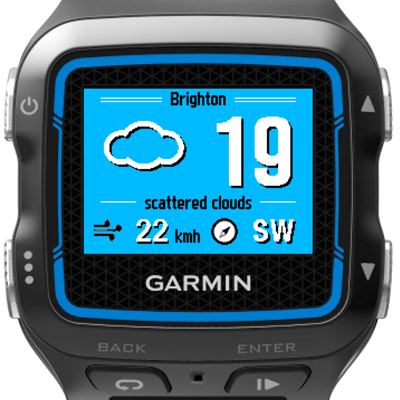 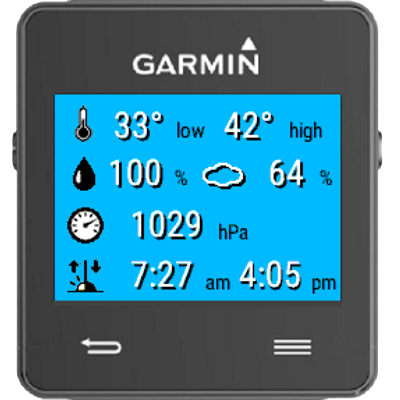 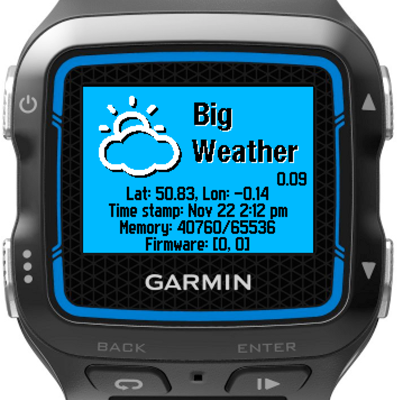 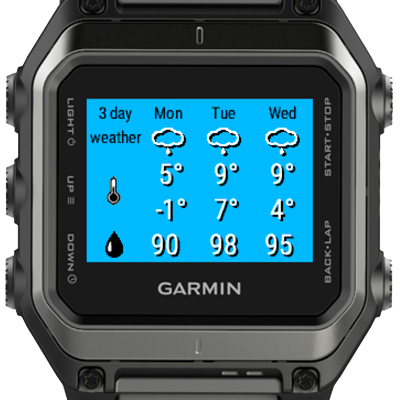 Cannot get weather data. Bad response from API =-2 now, or =-300 before software update.

Good until recently. I too have been using this app for a few years and I’m getting the same error message as others have recently. I’m going to have look at something else unless there is a fix for this. I have a vivoactive.

I love this app and have used it for years but it has recently broken. Another reviewer commented, in French, about the same situation so I think it's not just me. The app errors out with: Cannot Load Weather! Bad response from API response = -300 Hopefully either the developer is still watching or the project has been adopted elsewhere.

Very good App. Works better than the widget from epix. Hope you can aplicate some settings for colors and to have a choice between different places to know how is the weather in the Next 10-30 km. Thx for your work.

It works perfect with garmin epix .....but needs a dark theme rather than blue one...

I LOVE this weather app for my 920xt!! I upgraded to a Vivoactive 3 and it;s not compatible with my new watch, unfortunately. Please make this compatible!

Just downloaded on my vivoactive. It works but it's displaying the wrong area. I don't know how to change it.

Just installed on 920XT with 9.10 firmware. Works fine and the displayed weather is the actual weather.

Worked on my 920xt until I upgraded firmware. Please fix!

Seems to please itself whether it works or not. When it does work however it is spot on for info and very clear to read.

Does not work on Vivoactive. Only display weather for Suffolk county.