A simple widget to display the newest reading from the internal temperature sensor (not available on all devices!), as well as connecting to a Tempe sensor and display it's reading at the same time!</p><p>C or F is based on the "Temperature Units" set on your watch under Settings-System-Units.</p><p>A Tempe Sensor is needed to see the Tempe data</p><p>If you like the app, and want to buy me a cold drink, you can do so by way of https://www.paypal.me/jimm58</p> 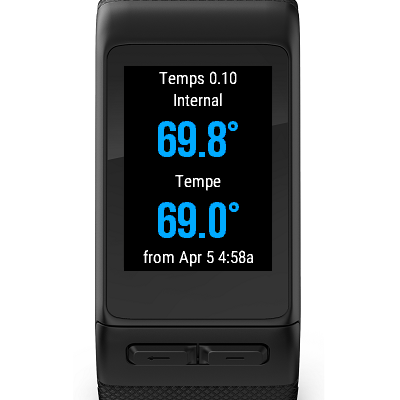 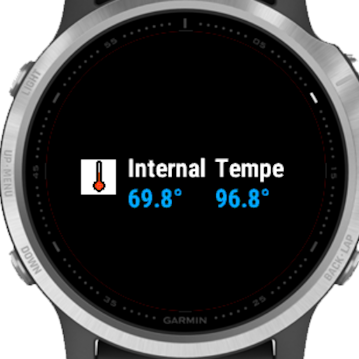 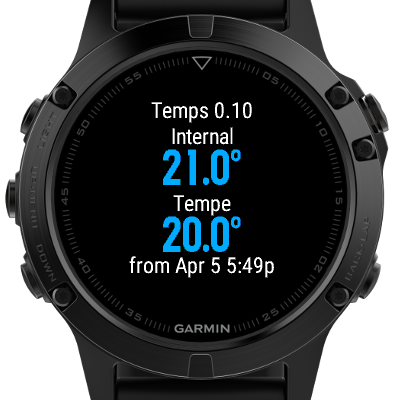 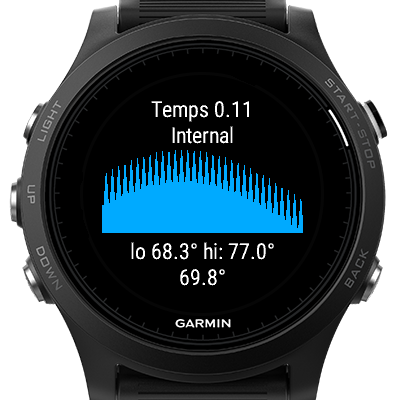 Regarding the TEMPE device - The watch only connects when MEASURING AN ACTIVITY so the app will not show anything. || What to say? it shows the watch's temperature (approx yours) as well as that from the Tempe device (if you have one) Recommended

Which device? The Tempe can take up to a minute to connect, and on some watches, the widget can time out before then if you don't interact with the widget.

Works perfectly on Fenix 5 with Tempe, a real working variant to the crappy garmin temp widget! Thank you!

That's the version number of the app.

Excellent. Exactly what i was looking for. Totally 5 stars!

On my 235, no data is shown, tried to uninstall and reinstall it since I thought it needed an upgrade. But either way info ain't displayed...

The 235 doesn't have internal temperature data that's accessible, and as I explained in the email, you must have a tempe sensor to get data for that. If you have a 235 and don't have a tempe, there's no data available at all, so nothing to display.

In the description of the App, you'll see that the internal data isn't available on all devices. It's not available on the f3 HR. (it has to be at least a CIQ2 device.)

In Vivoactive3 it just shows the internal temperature, that is about the skin surface temperature (31°C), completely useless. I have just found one app where the temperature is correct and it is included Gearmin Watchface, I guess it corrects the temperature by means of an offset, just an idea to improve your app

The tempe can take a minute or two to connect, and on the va3, the widgets time out in much less time. If you just tap the screen every 15 seconds, the widget timeout resets, and allows time for the connection to the Tempe to occur.

Works really well! I do not have the external Tempe sensor, but I discovered that the internal one on my Vivoactive hr is quite precise when I'm not wearing it and that when I'm wearing the device, the temperature is constantly overestimated by 5-6°C or around 10°F.

Works beautifully on the Fenix 5X.

Widgets time out very quickly on the va3, and the Tempe can take a minute to connect. Try again, but tap the screen every 15 seconds or so, as that resets the widget timeout.

Great app, since you can't make the tempe graph, can you show the Alt tempe reading in the last 2-3 hrs. Any thing to have spme king of history. If not can you show the max and low internal and external temperature for the last 24 hrs.

Great app. One question: is there a way to have a second graph which shows the graph of Tempe temperature as opposed to internal?

Since the widget only runs for a short time, it really can't collect the info to draw a graph for the Tempe. The internal data is collect by the Fimware, so that's easy to display.

Very good widget. Could you create one like this but only with pressure?

Installed it on my Fenix 3 and internal temp showing not available. Any suggestions?

See the first few lines in the app description: "NOTE: On watches that have Connect IQ 1.x (like the fenix3), the internal temperature will not be available"