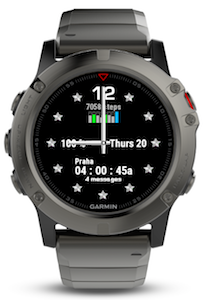 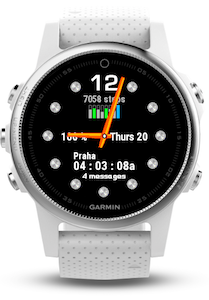 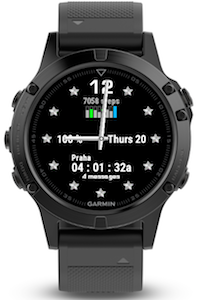 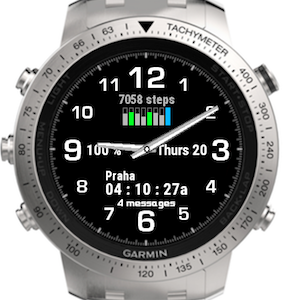 Very nice face!! Simple and elegant.. my favorite to go to work. Just a question, it’s possible to make disappear the Number of Messages in the top bottom? THX

This would be a great watch face if the second's hand or the digital seconds worked all the time.

Very good job !! il’s the third Watch face I use from your creation thank’s again continue like this Yvan from Nantes

Are you planning to apply the new features for the fenix 3 HR as well? I loved the face, but w weould be nice to be able to change the color of the graph and to change the information, such as burned calories and distance! Nice work!

Hi, how to setup bars with steps so they can be in colours? Using HR3

This is the best for me. Clear time but also the info I most want.

Very good design, but the second hand disapears after a few seconds - that's to bad

This was my goto face on the 3HR - lots of info, but still useable with a nice analog face. Now on my 5X, it's not be so great. First, altitude wasn't working and second hand never appears (ver 1.40), and now altitude SEEMS to be working but I can't keep the face loaded. As soon as I apply it via the watch or sync via connect, the watch switches to the default Garmin face. Also, I've got 8 step bars on my step graph, but always the second from the right shows a random small number of steps and the actual previous day's steps are the NEXT one over.

I would give 4 stars, but the second hand disappears on my Fenix 5X.

Very good, but second hand disappears from time to time. Apart from this, this is my favorite watch face. Hoping for a fix soon.

Brilliant watch face which I used on my 3HR and now on my 5S. However I cannot select Sunrise Sunset in Field 3 (Bottom). I can select any of the other options and they appear, but not Sunrise Sunset!! Have asked developer to comment.

Pretty cool, I just wish I cold change the Graphs to HR data, and move it to bottom.