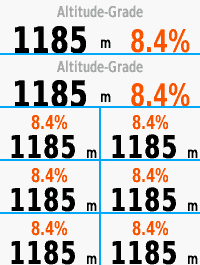 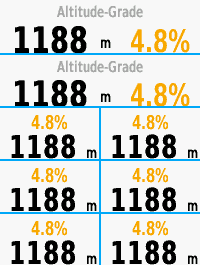 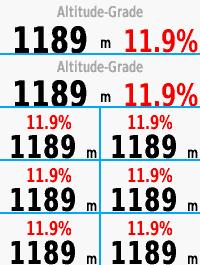 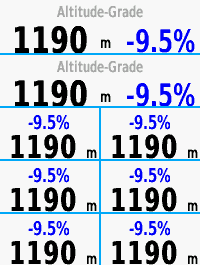 Great datafield, but only for older and outdated models. Not available for the newer recent 530 / 830 models. And these are amongst us for quite a while already. This datafields last updated in 2018. That's a pity. Alternative is FourClimbs+.

All your data fields are great, but I have just upgraded from the 520 to the 530, and they are not available. Could you update them to be compatible (inc speed+ave)?

Best one I've found, able to use it embedded into other screens which is really nice.

It's very nice, but the font of Grade is too small. It will be more helpful if the altltude and grade can be exchanged.

Good datafield. Grade is flactuating too much. It can replaced by Garmin's original grade field. Or it needs some averaging. On the other hand, it would be great if an color codded elevation graph is on the background. Thanks.

I love this combined field; however, I think the grade calculation jumps around too much to be truly informative. In my case it seems to swing quickly as much as 6-8 percentage points. A decrease in the sensitivity; perhaps by averaging more data points or at least a settable option to adjust the sensitivity or time averaging would be very helpful.

Better layout now (for small data field),you can see the grade ,but I would still like just whole numbers in meters,no need decimal ones..

Great concept, but not yet there, the percentage is just to small to see it and the colors don't help either...., maybe changing the whole background color like the app BGinfo Zones + HR

Very cool, the font for the % is too small but for me it is ok.

In metric (did not use feet to say ) mode,there is no need to show the fractions of meter ( ex. 156.6m ; 189,6m ) like the app does because this extra number make the grade display numbers too small when you use a regular data field. Whole numbers only will be better

Fantastic, it's just a shame that for me the font is way too small. :(

Very good, thank you very much!!!!