This Complex Data Field you can view Dr Skiba "W' Bal" info which is explained in this article</p><p></p><p>http://markliversedge.blogspot.com.es/2014/07/wbal-its-implementation-and-optimisation.html</p><p></p><p>You need to set W 'and CriticalPower (CP) or estimate setting with long (20min-60min) and short (3min-5min) best effort wattage.</p><p></p><p>I've also added the estimated time to empty (TimeToExhausted) or recharge (TimeToRecovery) W' Bal. When the balance and estimate time color is red it indicates emptying W' and when is green filling. The black color means the time with 100% of W' Balance.</p> 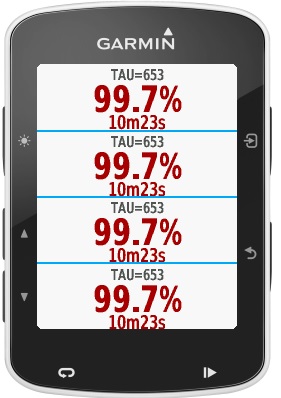 Is it possible to adjust TAU value in order to w' recovery be more slowly?

Hi, Have used this app on the Edge 520 in the past and enjoyed it. Simple and effective. Any chance of making it available for edge 830 and 530? Thank you

Glad to see this app - I wondered when someone would try to implement it in the garmin. It does seem to use battery on my garmin 820 really fast and I found recharge rate really slow compared to what golden cheetah workout editor predicts. Although I think golden cheetah seems to show recharge to be too fast I think compared to the maths I have looked at from phil skiba - any ideas?

Hi! MattinG, I have been using your app and I love it, I think it is an essential complement to my potentiometer. It works great and it matches perfectly my capabilities and it has even helped me to calibrate my CP and W’. Just one minor remark. The time to exhaustion (in my opinion one of the most useful data) is very variable. It is not the app´s fault, it is just the nature of how powermeters work when instantaneous power is involved. That is why most of us use 3 or 5 seconds power as “instantaneous”. So, my suggestion/question would be if it is possible to implement some kind of rolling average (maybe the last 3 or 5 seconds) to the time to exhaustion, so that the value is more stable. Anyway the datafield is amazing, thank you very much!

Now it works perfect for me. Quick support from the developer that reliable synchronisation only works with Garmin Connect app. I like to use it in combination with the w/kg data field to get a better feeling when to save energy or speed up.

Normal that consumes battery if saved in file FIT, that is why with version 3.1 has the option to disable the saving of the metrics. I find your assessment very unfair without having configured correctly and having consulted before.

Please add an option to disable saving the data to the ride.

I can know the reasons? Thanks

Version: v2.0-e81. Good for a ride that is not paused. If you take a pause while auto-stopped, the calculator will not find you recovered. Too bad it does not work with pauses, I find the display graphically pleasing and I love the "recharge" estimate and color change when consuming energy or charging.

doesn't work for me- I have exclamation mark on Edge 520

v1.3 was working great. It would be nice to be able to set the font color to just black though. When i upgraded to v1.4, I now just get a data field with "IQ" and a "!" in the middle of it.

Nice app. One question though: could you add the current 3s power to the datafield. When doing intervals I would also like to see the wattage I am currently doing next to the depletion / revocery numbers. Would be great!

Configured it ok, but it was stuck at 53% when I stopped for coffee (auto pause was off). The other W' app (by nakan) seemed to work fine (but gave different results). The display of your settings seems a waste of valuable space, I'd rather have a larger font.

Can't configure it on edge 520. Right now it's useless.

Excellent app, although right now I cannot save my settings on the edge 520 either from garmin express or the phone app. Don't know if it's an app or firmware problem (5.20) Thank you