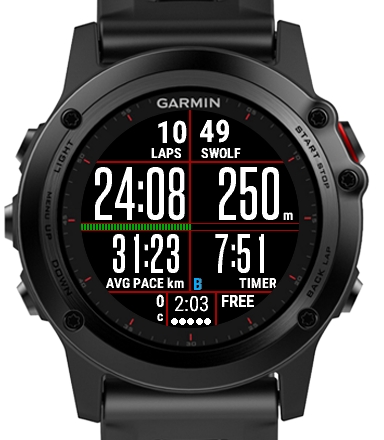 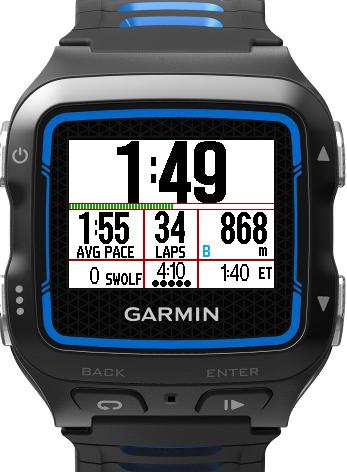 Doesn't work on vivoactive 3. I can't set the layout to 1 field so you only see the upper halve. This is not a bad review for the datafield, but just to let you know it isn't compatible with the vivoactive 3.

Thanks for the review, but please go to the forums.garmin.com and comment in the VA3. As a workaround, Use another builtin app that allows single fields.

ME TOO. ON FR235 NOT SHOWN SWOLF INDEX BUT HR. SOLUTIONS? TK

Thanks for the review, SWOLF is not natively supported in FR235.

Hi. Thank you for this. I've installed Dozen Swim in my FR235. All okay except the Swolf not show up but HR instead on the layout. Also swolf data not available when I sync in garmin connect. Other data like distance and time are all okay. Pls help.

Thanks, SWOLF is not supported in the FR235

Very excited to find this app! Had an old 910 and it had this capability and have been VERY disappointed with 735's inability. Anxious to try it when I swim on tues BUT how do I find it on the watch...I downloaded the app, it shows on my garmin connect app list but is MIA on watch itself...HELP

There is teh possibility to change the pool lenght and how? Thank you

Hello, I would like to ask if I can change pool length from 25m to 50m in Dozen swim data field? Or is it enough to change it in settings on my Garmin fenix 3 (under swimming app)? Thank you and keep up with good work ! Matej

Can't get it to work with Vivoactive HR. If you this data screen with any application other than pool swim, as soon at the water comes on contact with touch screen there is also sorts of issues. All the other "dozen data screens" are fantastic. If there is a way to turn off the touch screen I believe that would fix the problems.

Still a 5 star but adding HR will be great!

Is there any chance that you would be able to extend this and turn on the heart rate monitor for the swimming app?

thanks for the review, HR is available in fenix5, and 735. yes i will look into adding HR for the other models.

Amazing work! How can I configure de pool length in a vivoactive hr? Thank you so much!

thanks for the reveiw! yes, in configuration. here is an howto https://forums.garmin.com/showthread.php?332843-How-to-App-Settings

Nice work! Though I'd love to have it a bit more configurable. (I prefer avg pace /100m instead of /km).

thanks for the review, I will look into adding into IQ version 2.0+ watches.

I toke a swim today witn Dozen Swim and the font on my 735XT was to big. I could not read all the numbers.

Thanks, i will adjust.

Have downloaded the app onto my Garmin 235...will not show up on the watch. Please help

Thanks for the review, It is a data field and needs to be added to the swim application

hello , its not display in remix 5, only simple wording

Thanks for the review, It is a data field and needs to be added to the swim application As a single datascreen

how can i add this data field to the vivoactive hr pool swim app? thank you

I believe the vahr has a bug in the pool app, it only allows a 3 display screen and this datafield requires the entire screen. So for now it's not compatible with this datafield until Garmin fixes that bug. Try using a different app within the watch so you can see the swim datafield.

Works well and is easy to read, since all three (run, swim and cycle) are the same.

hi, I used Dozen swimming to swimming in pool, everything look good, however, that swolf always show 0. however, it show correct value if I upload data to garmin connect, anything is missing here? Thanks

Not all watches support that metric. Perhaps that is what your are experiencing.

Not bad for a beta. I thought it will overcome garmin's limitations when setting the pool size. No matter what you set the pool size to it will always use the pool size from garmin. The lap counts inaccurate.